Restaurants and inns of Tomonoura offer many dishes of local fresh seafood from Setouchi. You can easily find and enjoy dishes made with local fish. While walking around the town, you might find some dishes with unique names: Buttsū and Gasuten. What are these interesting dishes that locals love? 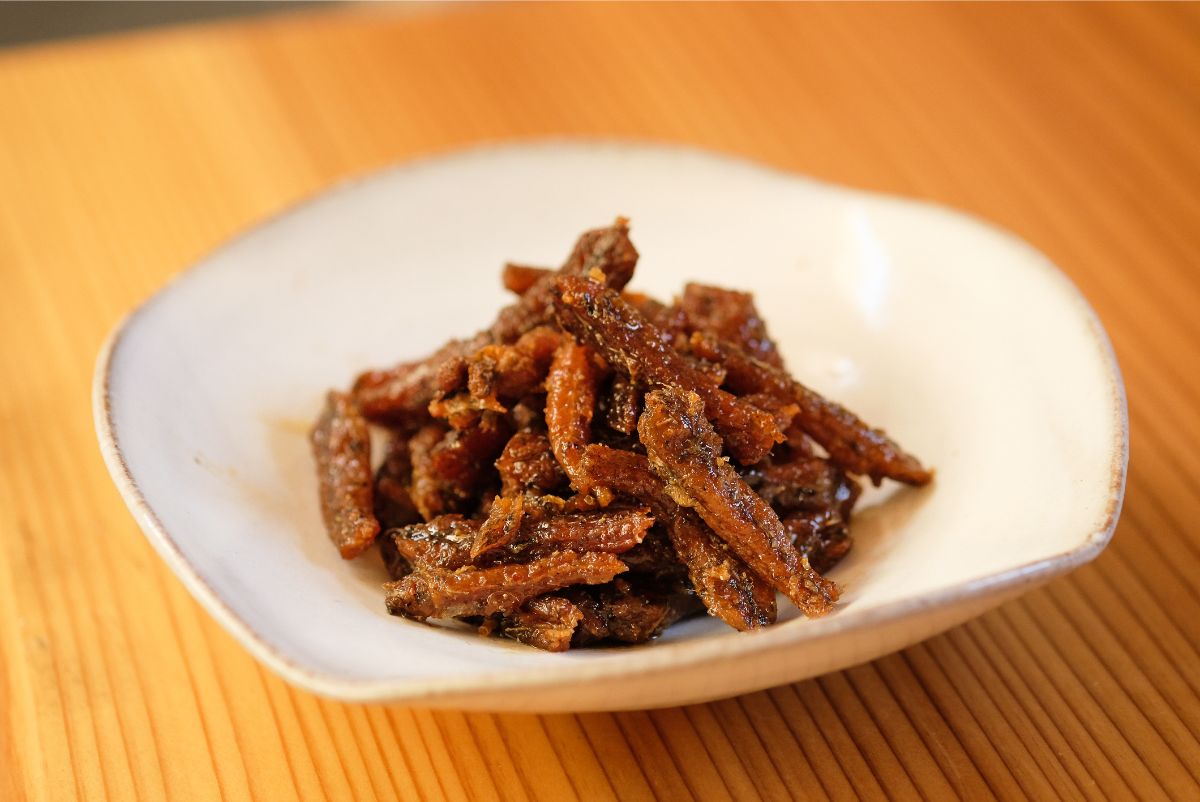 What is Buttsū? – A common home-cooked food in Tomo

When visiting an udon restaurant for lunch, the owner asked me “Do you want to try Buttsū ?” I said, “Sure!”, but I had no idea what it was.
He gave me a plate with something small and brown, and when I picked one up with my chopsticks, I found that it was a small fish. It had a hard texture, but the more I chewed it, the more the umami flavor came out. With the salty-sweet flavor of soy sauce and sugar, I wanted to have it with some rice. 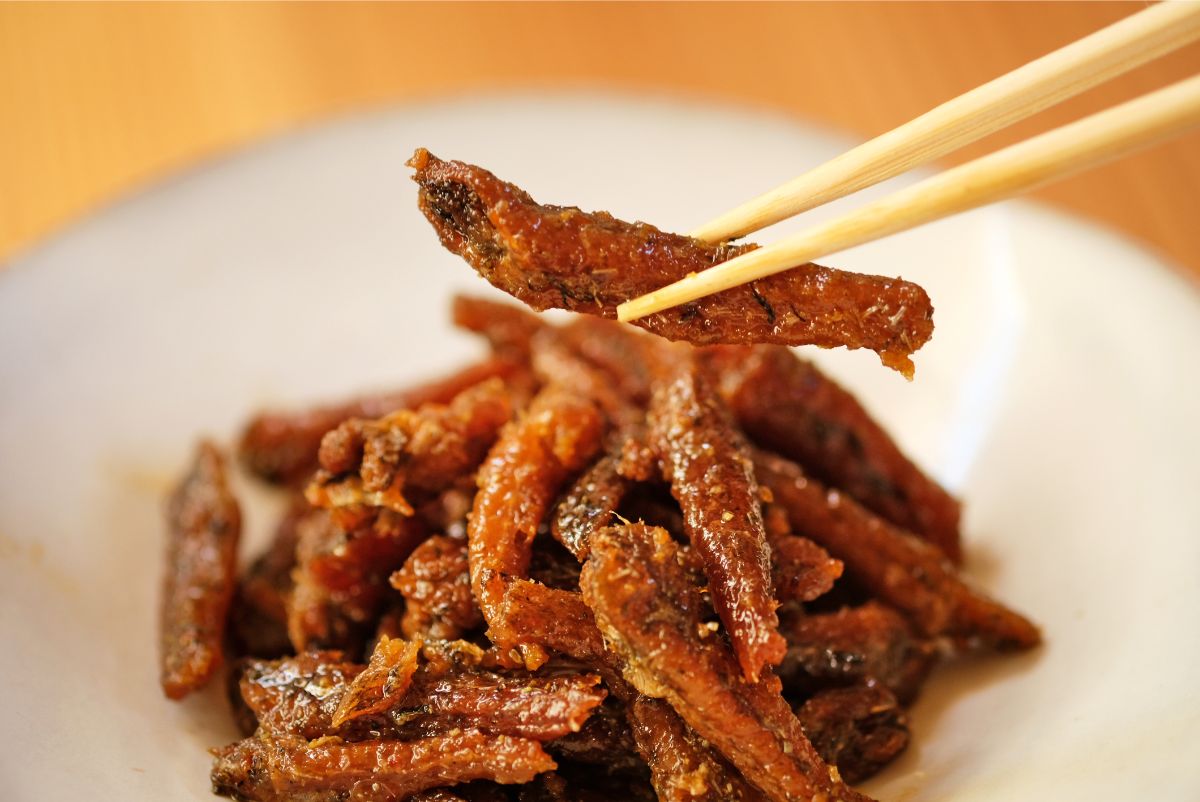 Buttsū is a small fish, around 10cm long. The owner said, “I don’t know the formal name, but I guess it’s a type of flathead.” Tsukudani (food boiled in say sauce) is a standard cooking style for Buttsū: some people just call the dish itself Buttsū. The owner said, “Buttsū is something that mothers cook in Tomo.” In early summer, it is served on the tables of every household. The process to make Buttsū is to first remove its head, tail, fins, and guts, then deep-fry it without batter.

After frying, boil it in a broth of soy sauce, mirin (sweet sake for seasoning), and sugar until it gets its salty-sweet flavor. The owner of this shop seasons Buttsū with chilies and sanshou (Japanese pepper) in his own original style. “The methods of cooking and seasoning are unique to each individual. Ask a fish dealer!” suggested the owner to me as I left the restaurant. 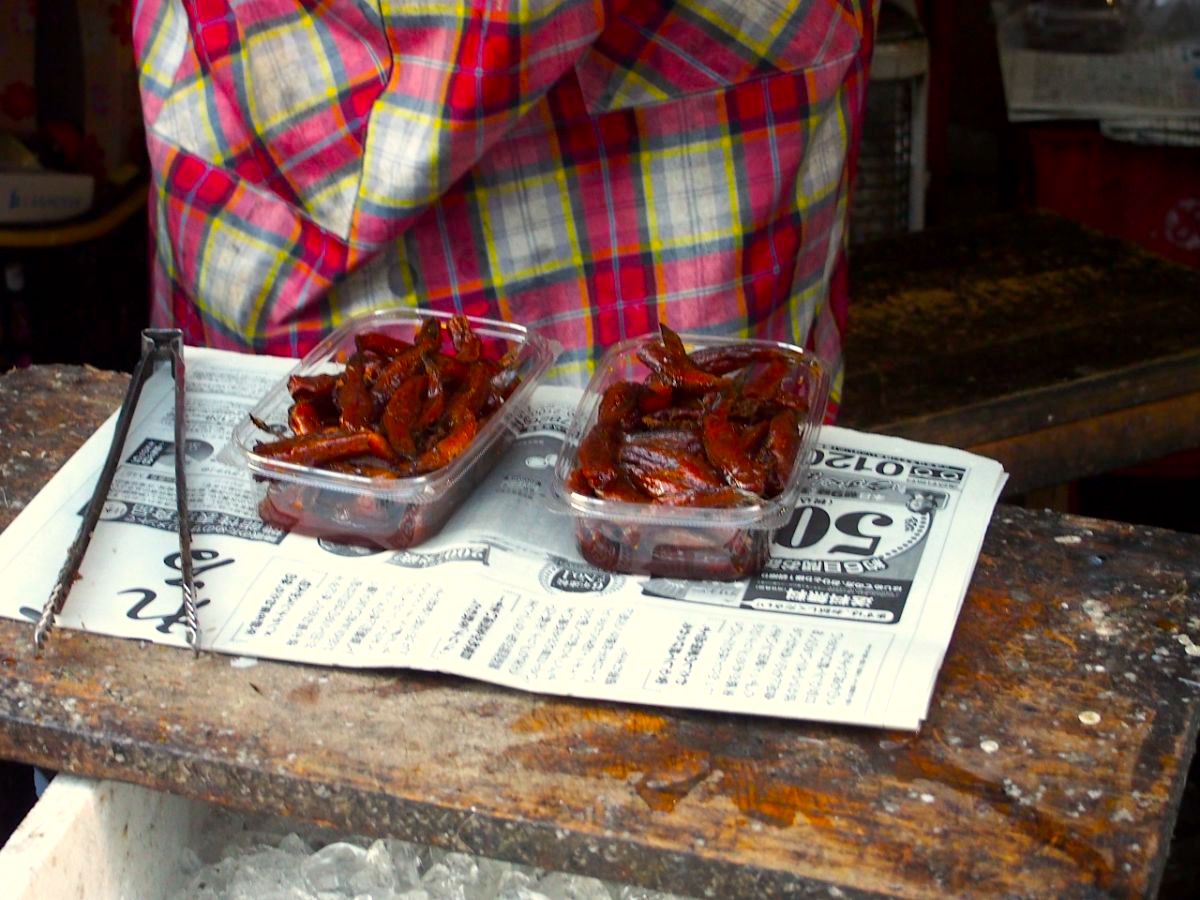 So many different ways of cooking: food the way mom makes it

When I looked under the eaves of the fish store, I saw a fish that looked just like Buttsū, but it was not! The owner said that as the Buttsū catch is decreasing year by year, she was cooking tsukudani using gobies instead. She boils the deep-fried fish with sake, soy sauce, and soft brown sugar: her original style. She let me try some while explaining, “I don’t use mirin because the fish gets hard. I boil it for a while on a gas stove.” Sure enough, it was melt-in-your-mouth soft and had a sweet and mild taste. 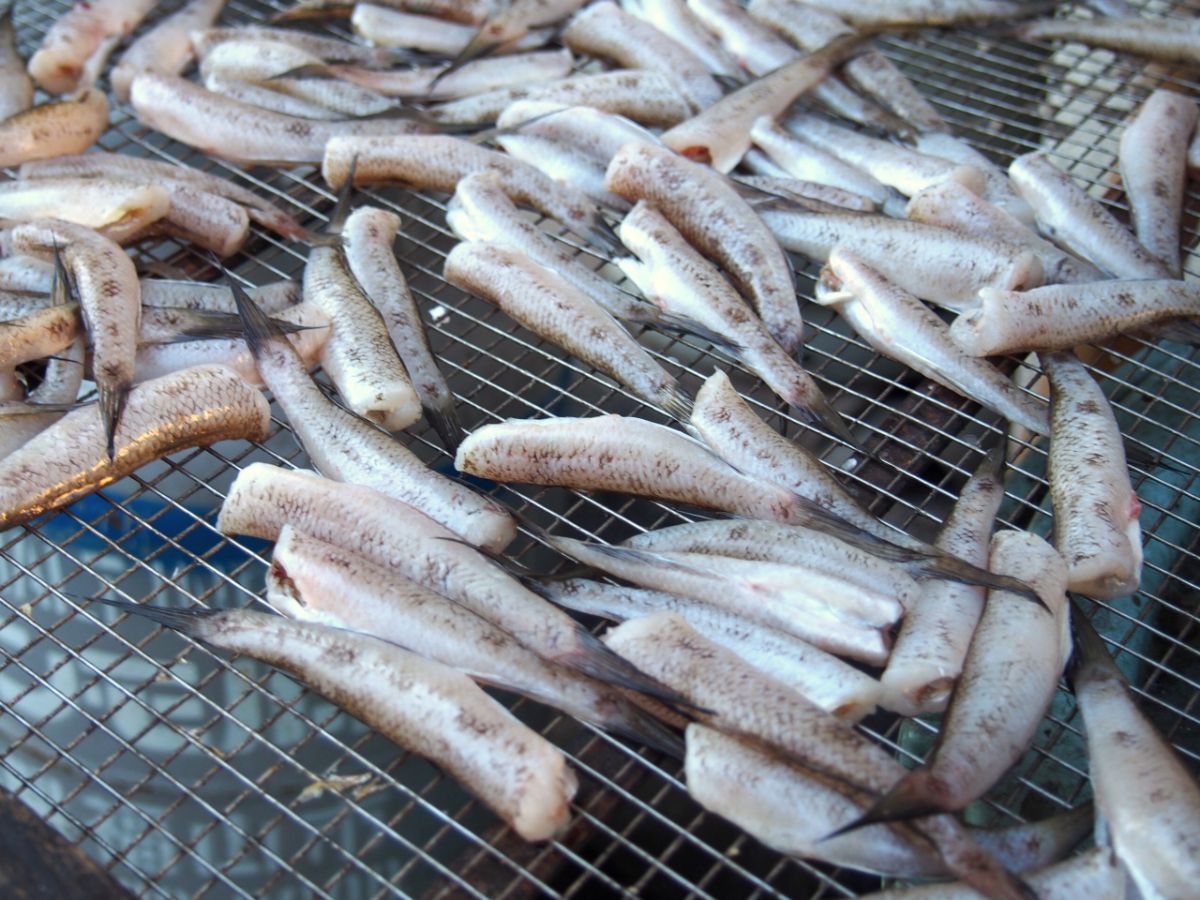 “I don’t deep-fry fish, just dry it a bit.” “I add starch syrup.” The local ladies who came to buy fish told me one after another about their family’s Buttsū making secrets.

One other thing I was interested in was Oranda-ni (Dutch cooked), which is kanroni style (cooked in a heavy syrup) of whole, small sea bream, deep-fried without breading, which keeps the shape of the fish. They say this style is a rather special dish and unusual to see. 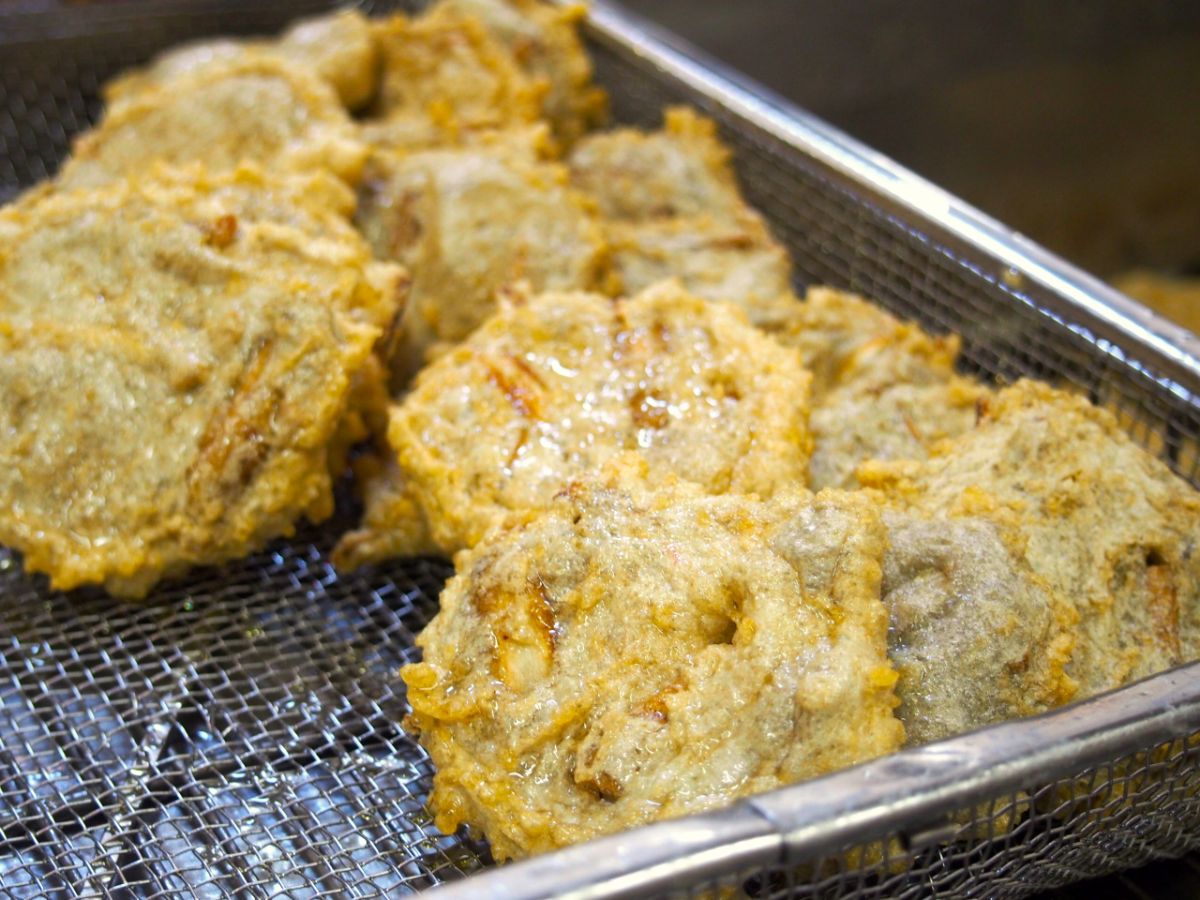 Gasuten – invented for making good use of small fish

Tomonoura produces a lot of fish paste products such as chikuwa (a tubular roll of boiled fish paste) as well as different types of tempura (deep-fried fish and vegetables). Gasuten, with its simple look, is especially eye-catching. It is like Satsuma-age (Japanese style fish cake) as it is a deep-fried fishcake made of mashed and kneaded small fish, like nebuto (coral fish), and includes the fishbones. There are various opinions, but it is said that the name Gasuten came from its slight bony texture and a unique onomatopoeia described as “Gasu gasu.” 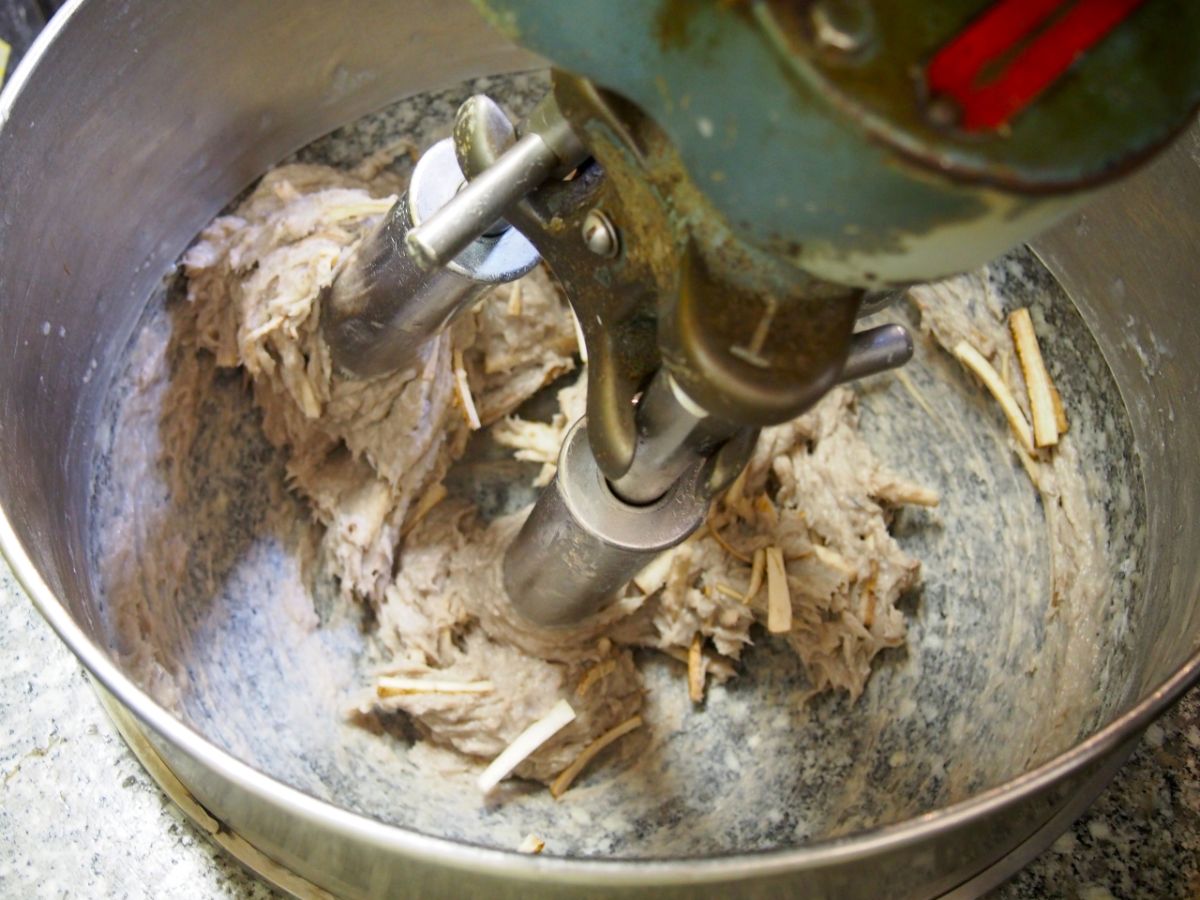 The nebuto catch has been decreasing and we rarely see them these days. However, so many nebuto were caught in Tomonoura up until a few decades ago that a fishing net could not be raised easily. The market value of nebuto was low as it was bony and too small to process. Then Gasuten was invented as a way to eat it.
Again, the way of cooking is different depending on cook, but one thing in common is using gobou (burdock root). Thinly sliced and shredded, crisp gobou works not only for creating a crisp texture but also for minimizing the fishy odor. 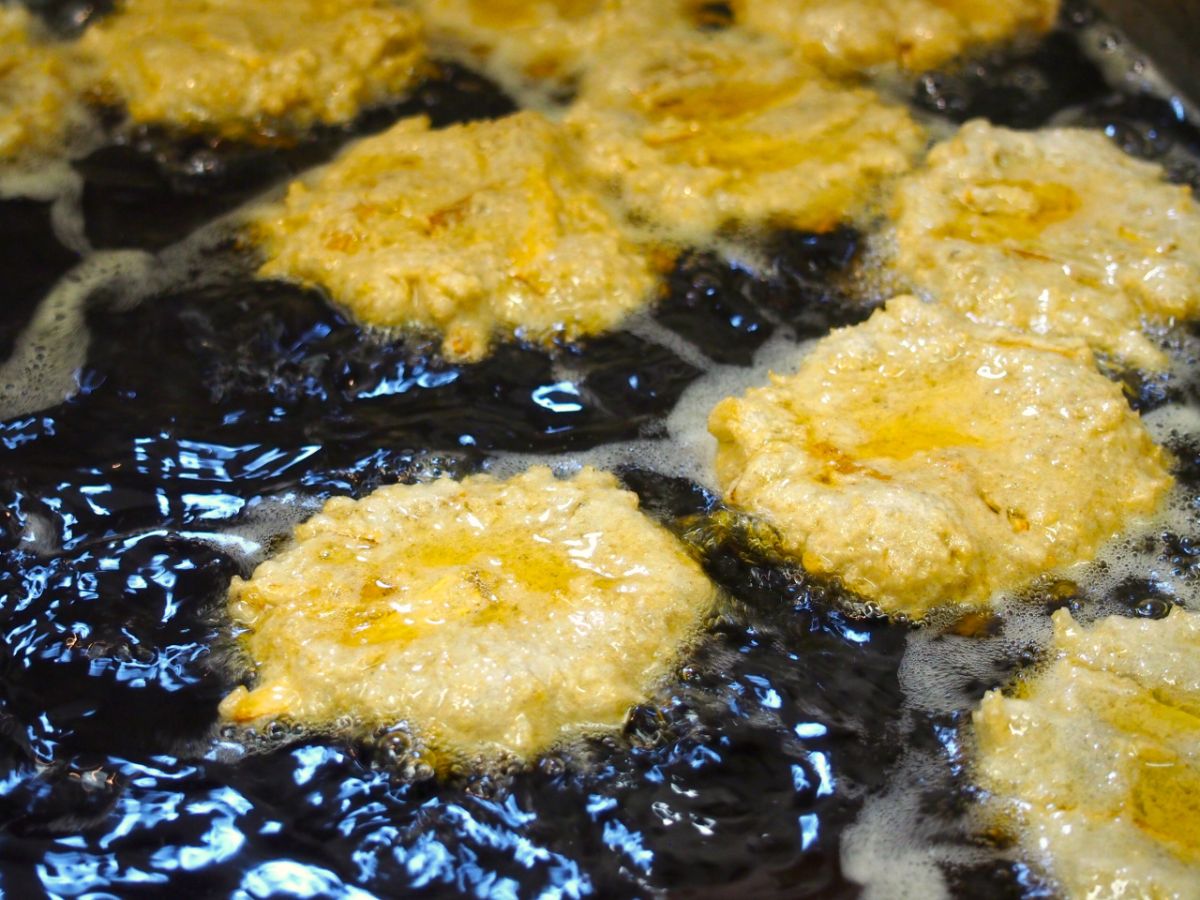 Though Gasuten is deep-fried at high-temperatures and has a bony texture, you can still enjoy its full umami flavor. When you do, you will understand why the locals always love Gasuten. It is a great snack to take along on your town walk or purchase as a souvenir. You can easily find Gasten at fish paste products stores in Tomonoura.