I took to me knees on the tatami mat of Fukuzen-ji, the wooden beams of this centuries-old temple framing a postcard worthy scene. In the foreground was Bentenjima Island, a rocky islet with a pagoda spire ascending above the tree line. Beyond was the rolling greenery of Sensuijima Island. Surrounding this pair of islands on all sides was the Seto Inland Sea, shimmering in the afternoon sun. Hung above the temple’s beams, in Japanese calligraphy, reads a quote: “the most beautiful scenic area east of Korea.”

Perhaps Tomonoura’s most recognizable attraction, the view from Taichou-rou is one for the history books—and I mean that literally. Fukuzen-ji Temple as it stands was built over 300 years ago on a hill overlooking Tomonoura’s calm sea. Surprisingly it’s not the temple itself, but a reception room called Taichou-rou built besides the main altar that made Fukuzen-ji’s name.

In 1711, a Korean diplomatic envoy named Lee Bang Eun stayed in Tomonoura during his visit to the Setouchi Region and a reception was held in his on Fukuzen-ji’s grounds. As he looked out on the stunning juxtaposition of Bentenjima and Sensuijima’s lush trees and the blue expanse of the Seto Inland Sea, all outlined by the walls of Taichou-rou, he made his famous remark, which is now immortalized in calligraphy on a wooden placard hanging above the scene. While there may be hyperbole is Eun’s words, there is an undeniable grandeur to Taichou-rou. Even in person it looks like a landscape painting, one that captures the best of Setouchi’s natural beauty.

I took my time admiring the view but visitors to Fukuzen-ji Temple can also take part in a unique sutra experience. Sutras are religious aphorisms that represent significant teachings or tenants of Buddhism. During religious ceremonies sutras are often spoken repeatedly to produce a ritual chant. At Fukuzen-ji, there is a sutra calligraphy experience that costs 1,000 yen, in addition to Taichou-rou’s 200-yen admission fee.

After approaching the front desk and requesting the sutra experience, a Fukuzen-ji attendant asked whether I would be interested in the long or shortened version. As a true novice to Buddhist practice with limited exposure to Japanese calligraphy, I decided the shortened version would be the best fit. She then led me to a private room that borders Taichou-rou. The view, even just a few meters to the left, does not match the stunning landscape described by Lee Bang. When I sat behind one of the many tables set up in the room, however, I could make out many of the same features—the Bentenjima pagoda, Sensuijima’s lush peaks and the calm waters off Tomonoura. 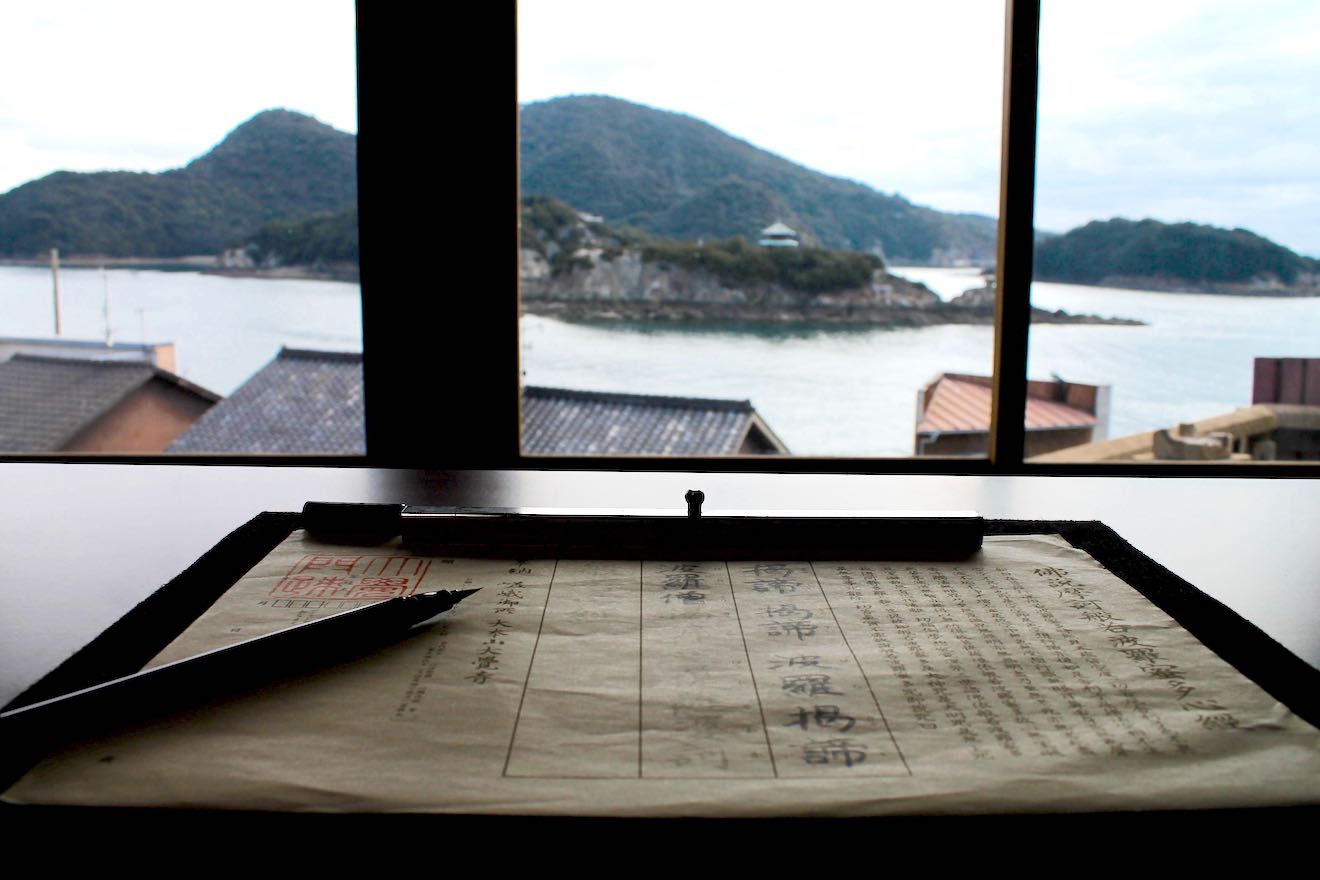 Following the direction on the paper the attended handed me, I recited some of passage written on the page out loud, then proceeded to draw out the characters for final phrase in that passage with a calligraphy pen. In the long version, visitors would write out the entire passage. I would say a few Japanese lessons may help with this part of the experience, but in reality sutras are written in classical Japanese, which like “old English” is usually lost on the even the most fluent native speakers. Luckily the kanji characters are all traced faintly on the page. They simply ask you follow the lines. I was able to lose myself for a second as I focused on the lines and the repetitive motions of my calligraphy pen. When I finished, I looked up and enjoyed Fukuzen-ji’s impressive landscape in peaceful silence.