Tomonoura still has a strong sense of history as a port town that prospered in the past, with port facilities from the Edo period that are nearly perfectly preserved.
Check out our recommended route for strolling around the historic areas of Tomonoura, envisioning its glorious past.

A local guide shows you around! Tomonoura history exploration route 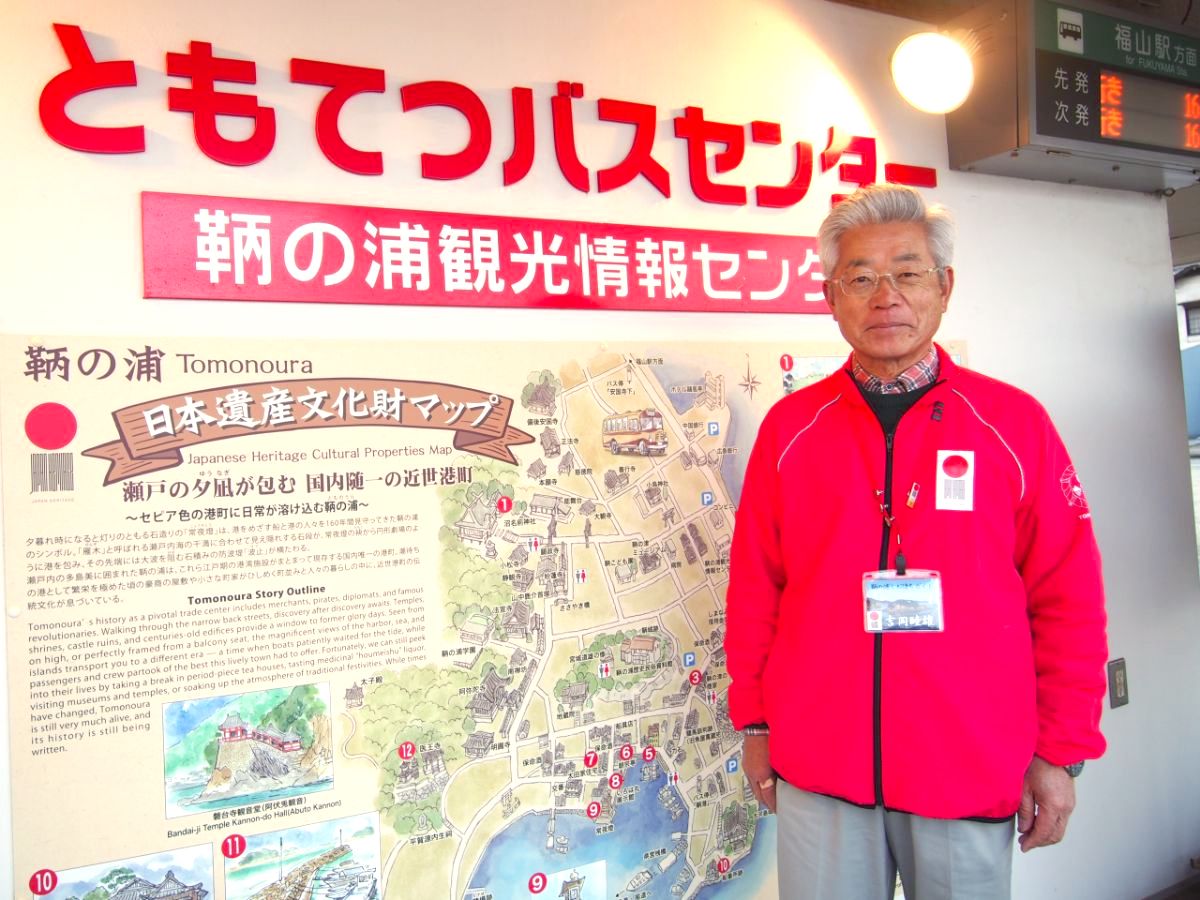 Mutsuo Yoshioka, is one of the recommended local guides of the Tomonoura Shiomachi Guide. Take a tour guided by a professional who knows the local history of the town.

The castle remains, a central battle location of the Nanboku-cho period –Taigashima-jou-ato 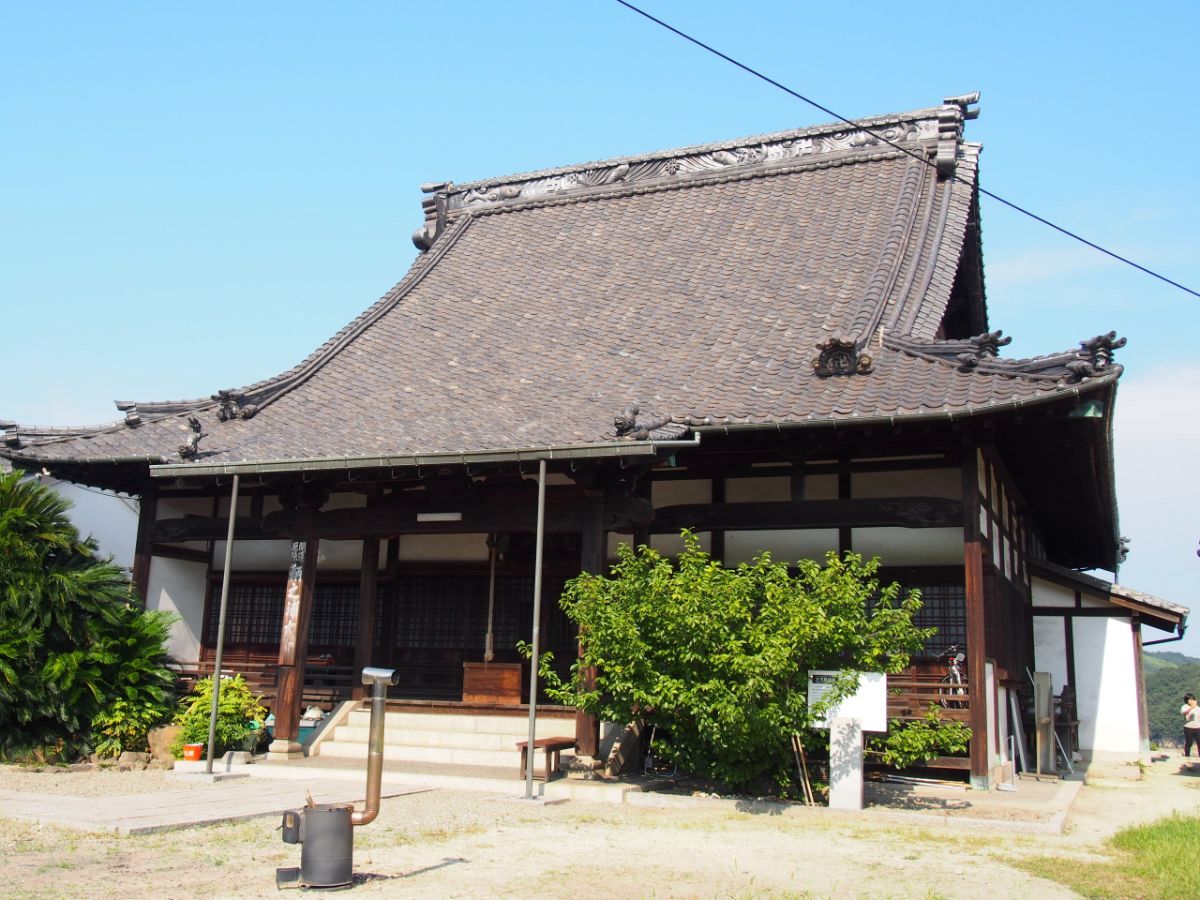 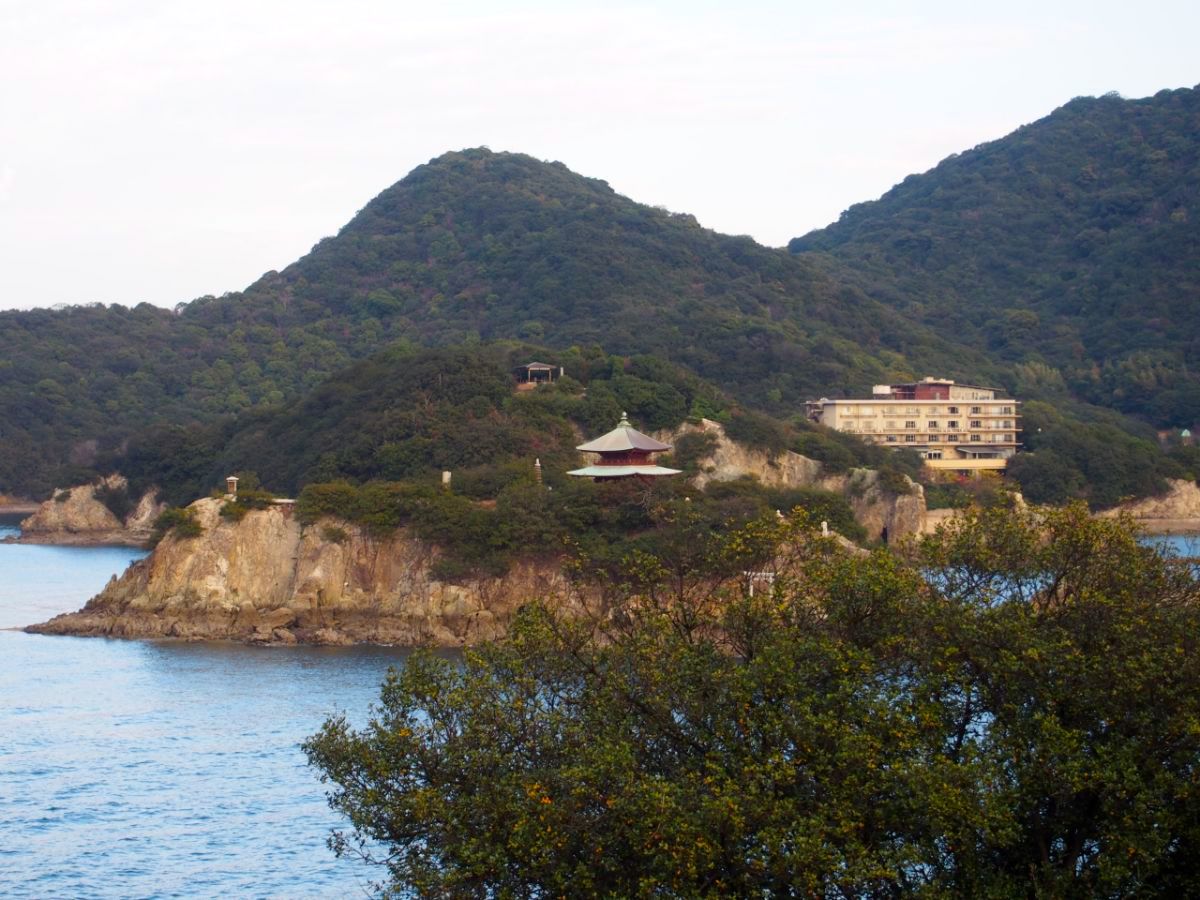 Taigashima (or Ogashima), is connected to the land today, but it used to be an independent island until around 1600. In the Northern and Southern courts period, Taigashima-jou was built as an important location for maritime traffic for its ability to quickly investigate the tidal conditions.

A base of port security to keep maritime safety – Funabansho-ato 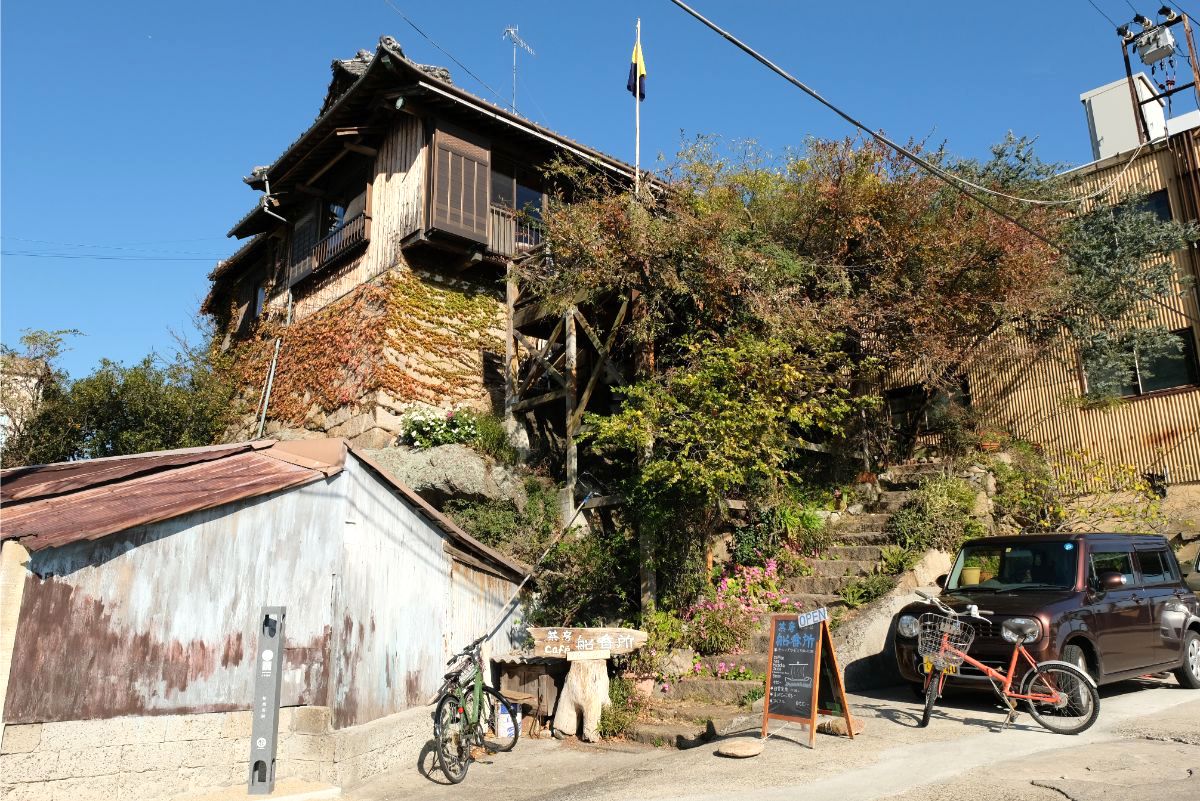 Funabansho (the guardhouse of boats) served as a port administration office to control security by monitoring boats coming in and going out of the port.
The building was reconstructed around 1955, but the ishigaki (a stone wall) of the Edo period remains as it was originally.
(a cultural property of Japan Heritage in Fukuyama, Tomonoura) 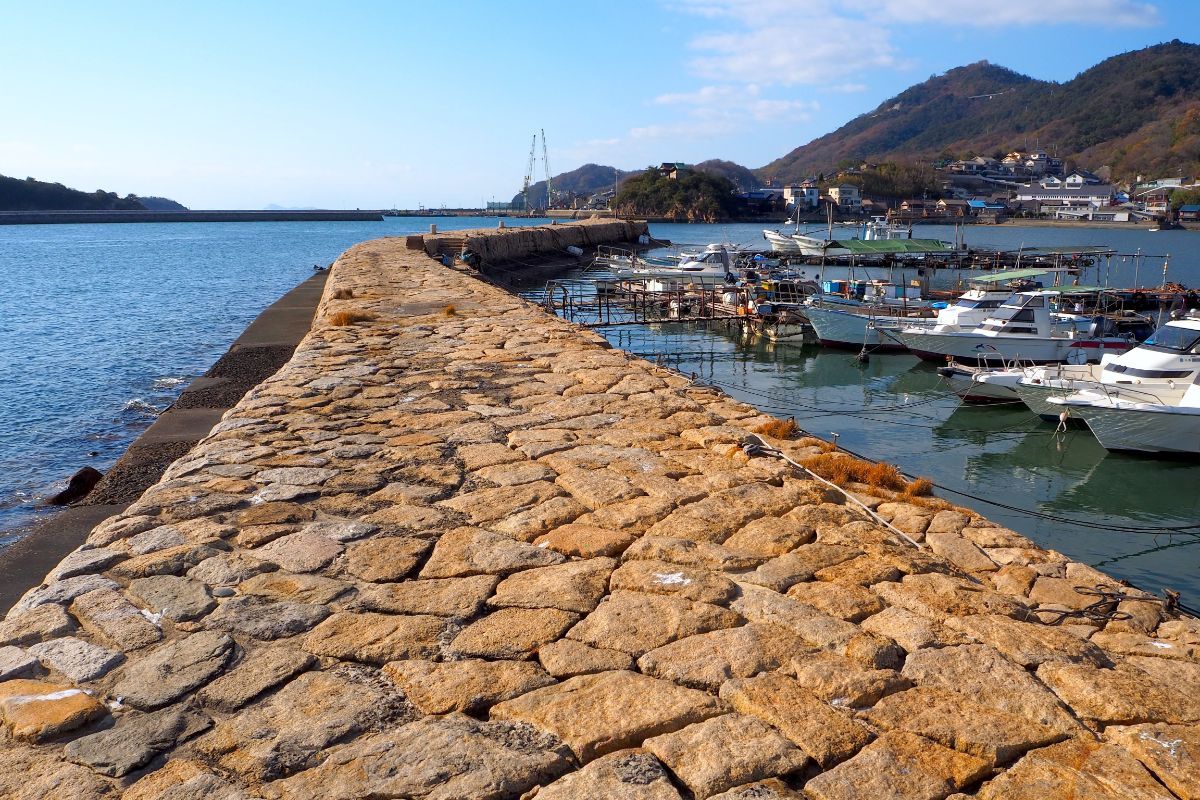 The Hato seawall extends towards the sea from Funabanshoato. The seawall was reconstructed repeatedly from the Edo period to protect boats from strong winds and high waves.
(a cultural property of Japan Heritage in Fukuyama, Tomonoura) 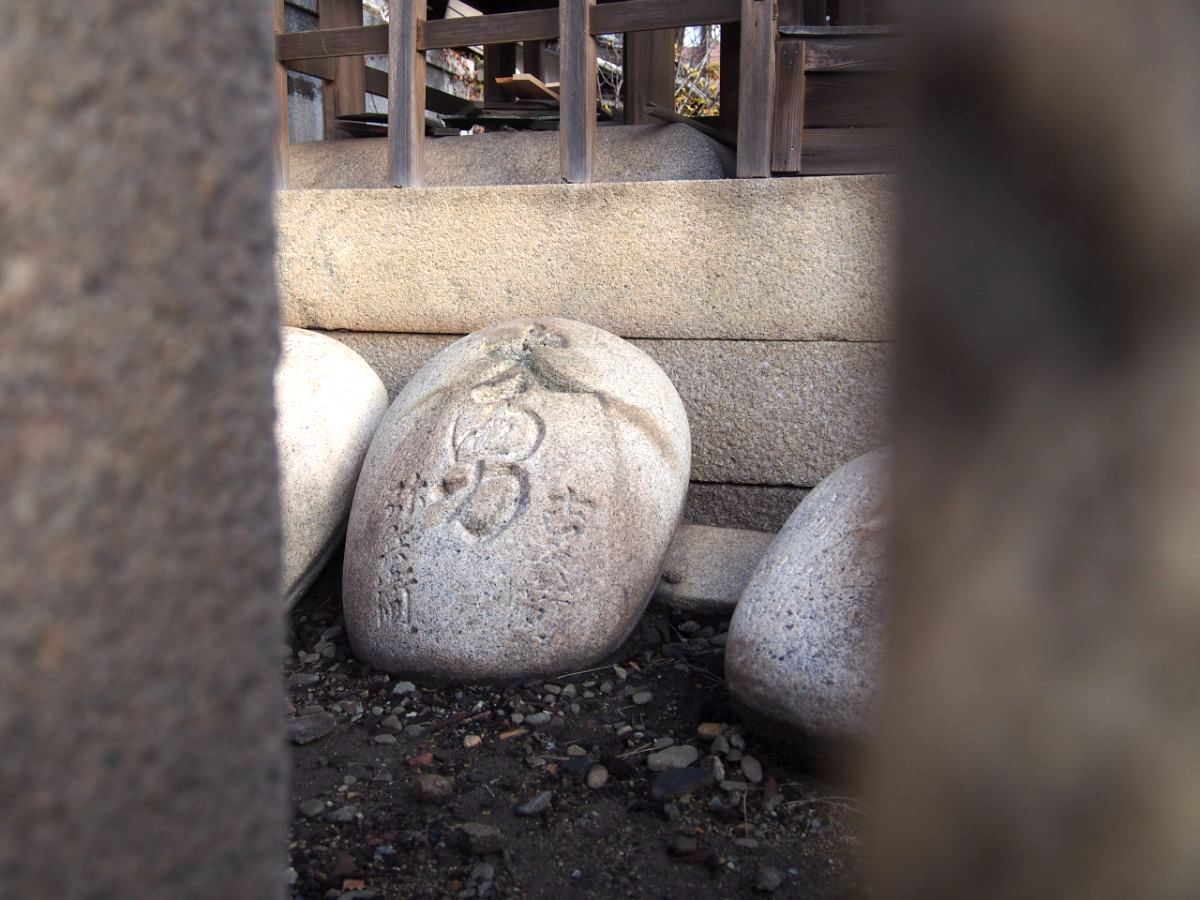 Tomonoura once prospered with many marine transportation businesses and many people worked as nakashi (manual laborers) who loaded and unloaded cargo. Nakashi are said to be proud of their strength and participated in a strength contest using chikaraishi (stones of strength) on the occasion of the festival. The weight of the stones is a surprising 118〜230kg!
(a cultural property of Japan Heritage in Fukuyama, Tomonoura)

Stone steps connecting the land and the sea – Gangi 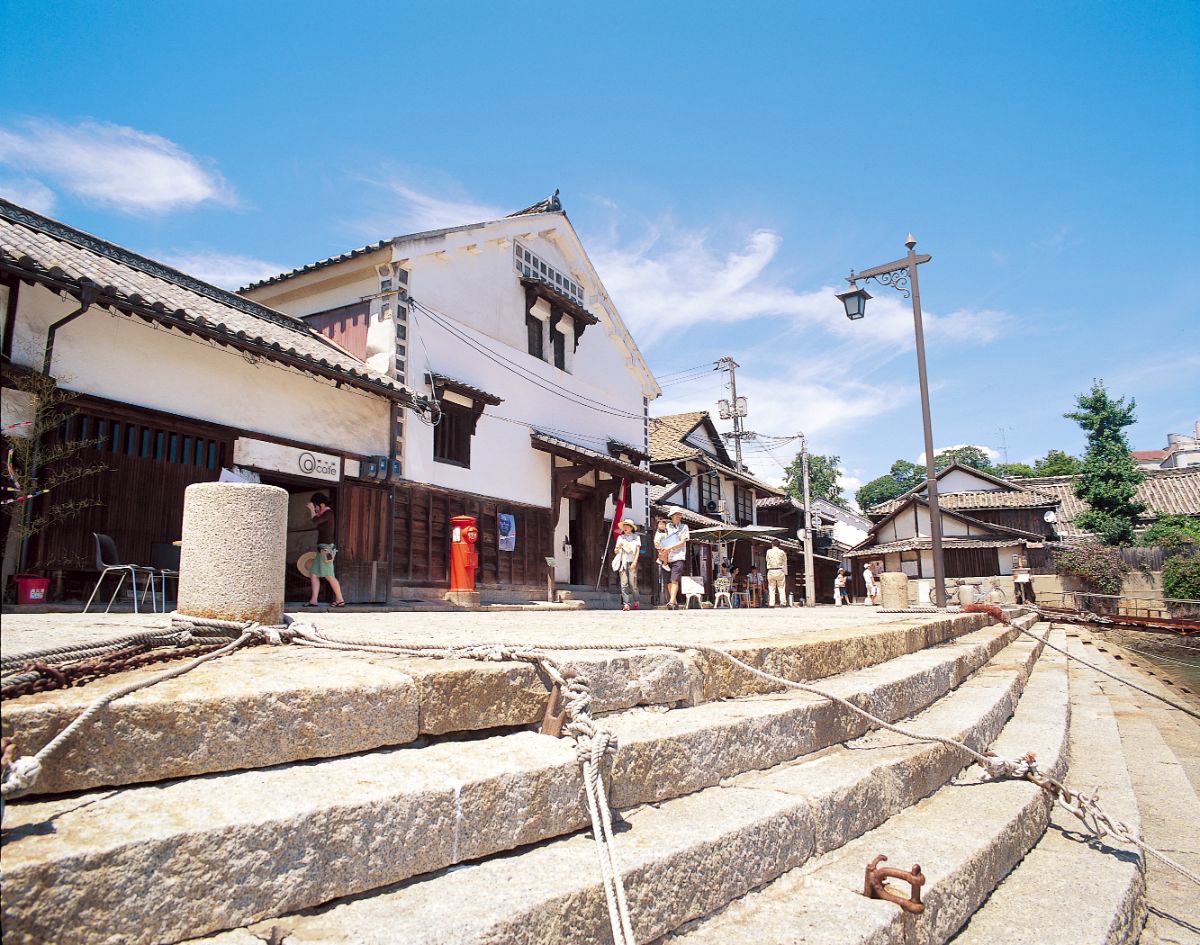 Gangi are the stone steps built along the sea for mooring boats. The Gangi built in the Edo period are now buried, but Hama no Ogangi which was built in 1811 still remains.
(a cultural property of Japan Heritage in Fukuyama, Tomonoura)

A symbol of Tomonoura since the past times –Joyato 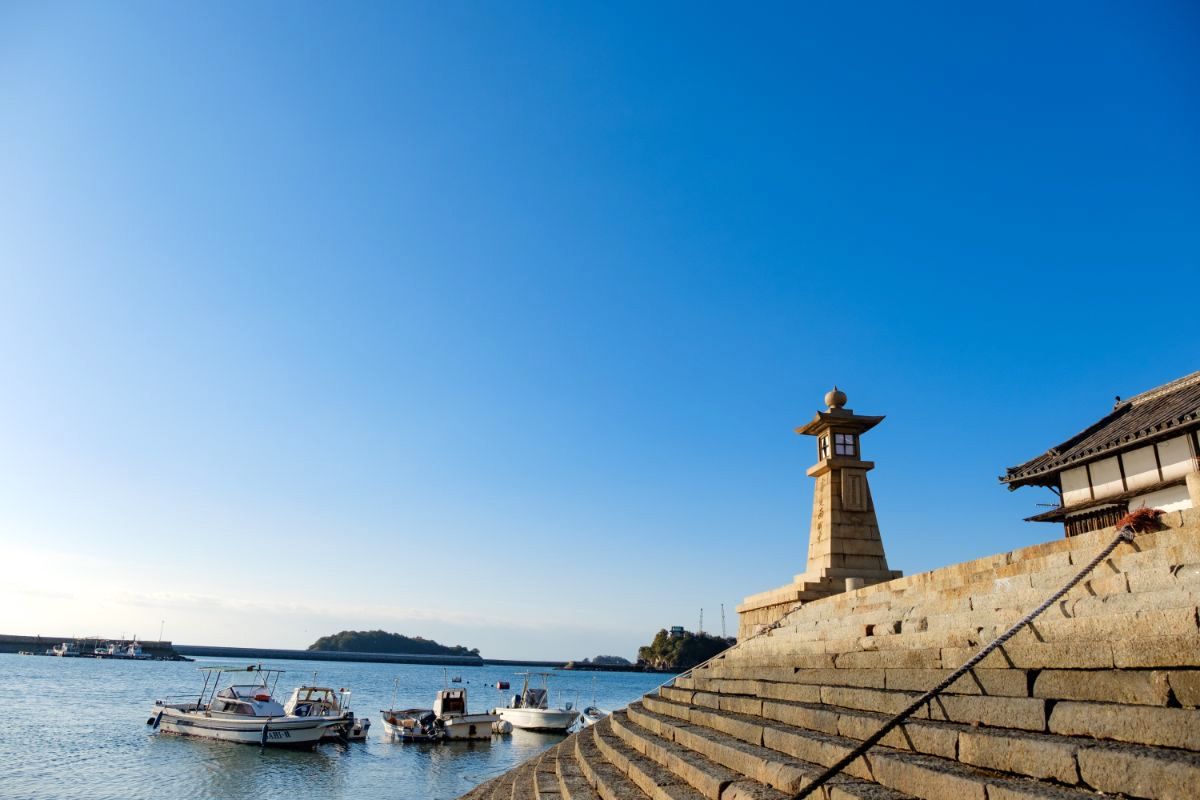 Joyato Lighthouse (all-night street lamp) was built in 1859. The Joyato in Tomonoura is the largest out of the still existing Joyato in Japan with a height of over 10 m (including the foundation under the water).
(a cultural property of Japan Heritage in Fukuyama, Tomonoura)

A ship maintenance area where shipwrights demonstrated their skills – Tadeba-ato 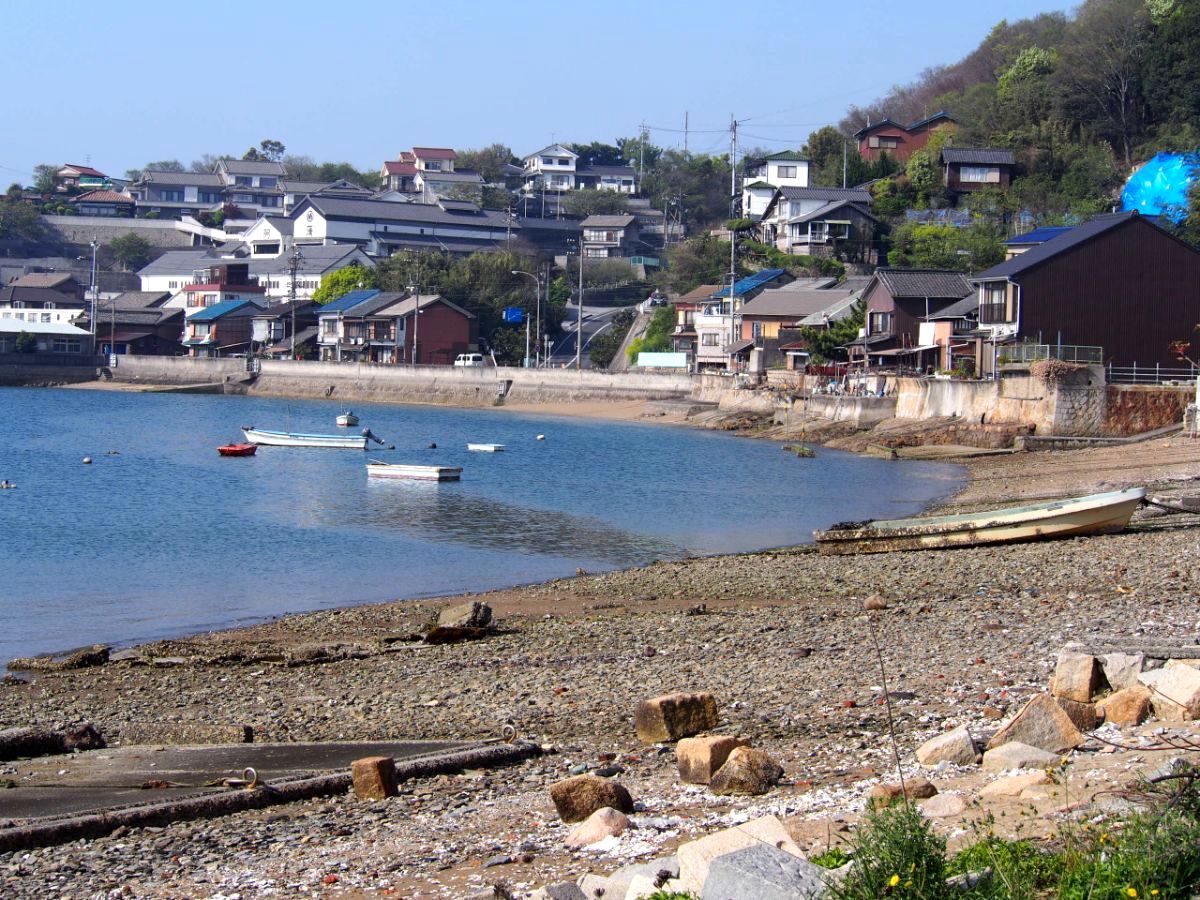 Tadeba is the place where maintenance is done to protect the undersides of ships by burning off shellfish and doing repair work out of the water.
Tomonoura was a suitable place for ship repairs with many technical shipwrights as well as its geographic condition with calm seas and the great tidal range. About 900 large ships are said to have been transported to Tadeba around 1800.

A view from a hill that Rai Sanyou admired – Yodohime shrine 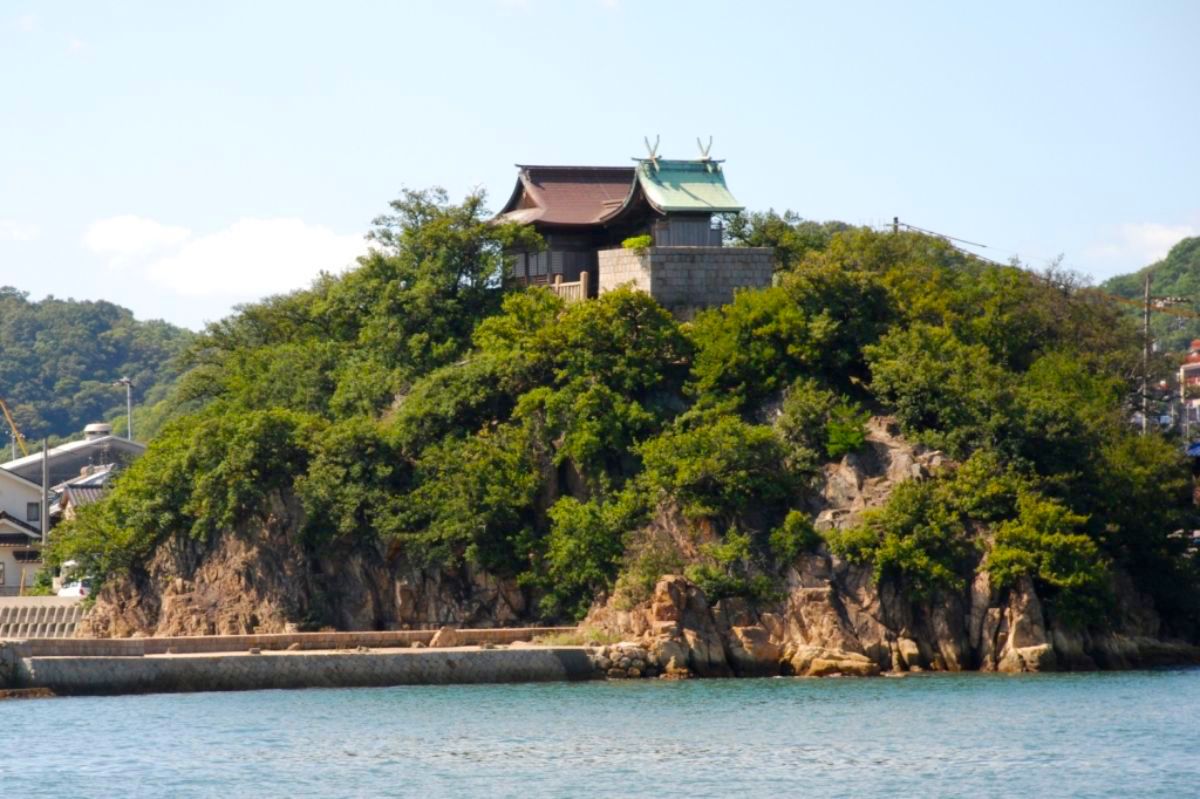 Yodohime, the Japanese goddess, is enshrined here. The panoramic view of Tomonoura from the shrine precinct is amazing.
(a cultural property of Japan Heritage in Fukuyama, Tomonoura)

→“Yodohime Shrine” – a god overlooking the neighbors of Hira district 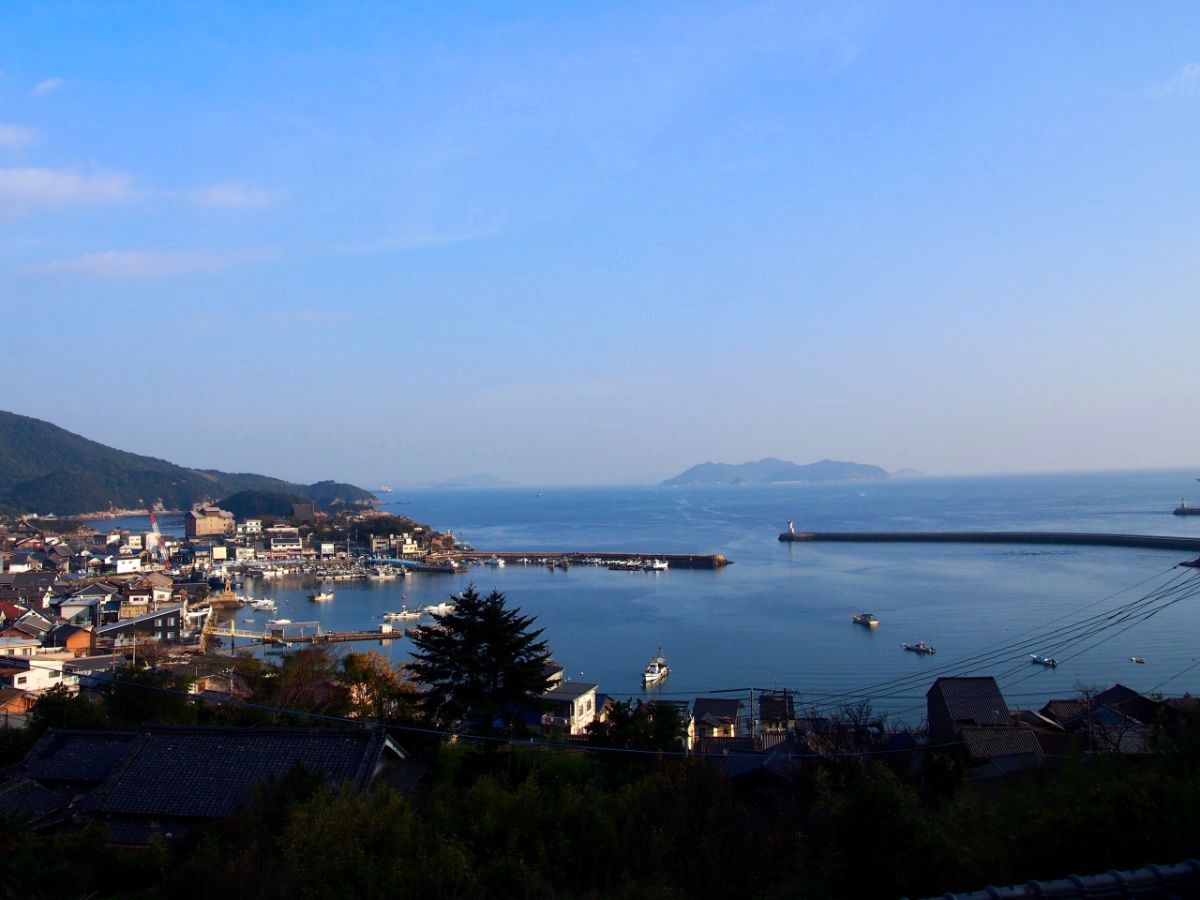 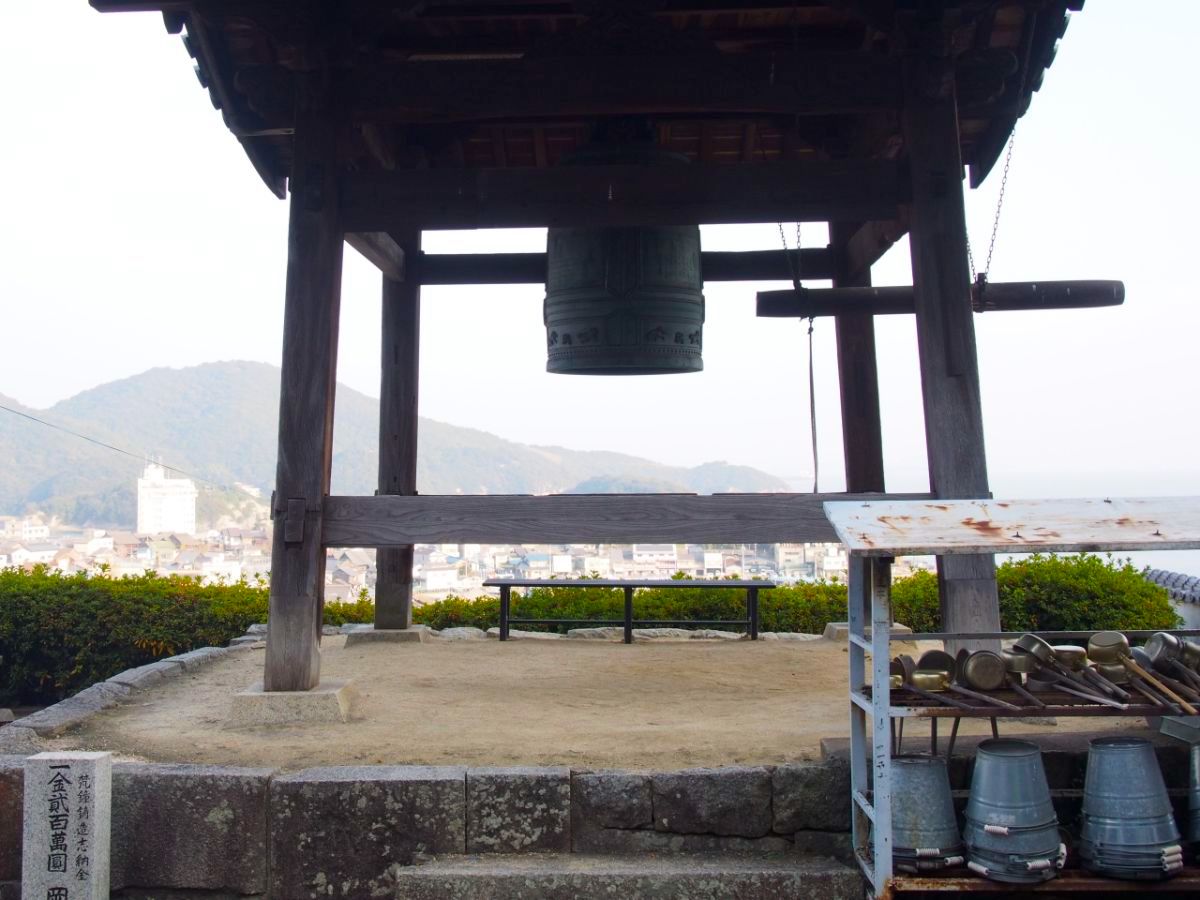 Iou-ji temple is the second oldest temple in Tomonoura, located halfway up Ushiroyama mountain. The temple is known as a place you can pray for strong legs, which you will need if you continue up the stairway to Taishiden! This location is one of the best views in Tomonoura.
(a cultural property of Japan Heritage in Fukuyama, Tomonoura)

→Iou-ji Temple – Known as a scenic spot in Tomonoura 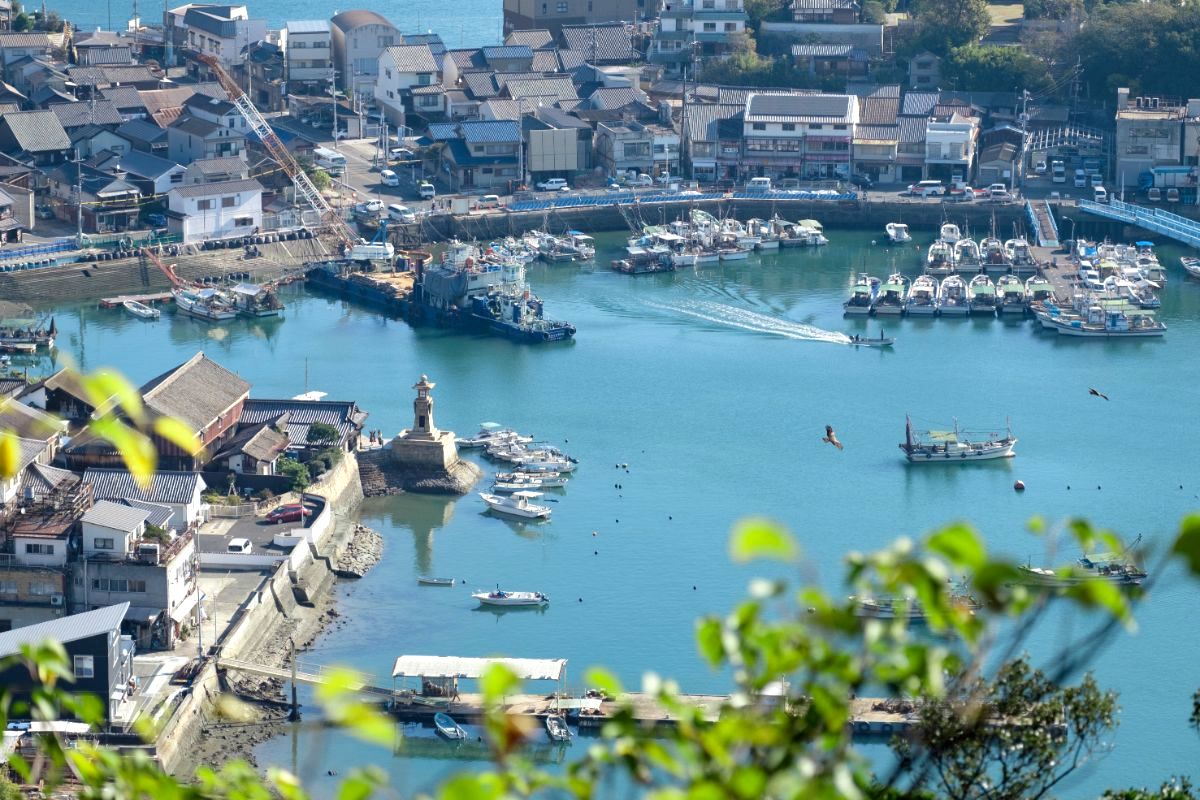 Taishiden is located at the top of a flight of stairs originating from the Iou-ji temple precinct. The path through the forest leads to a beautiful view that will leave you speechless.

→Taishiden – A Setouchi Lookout Worth the Climb 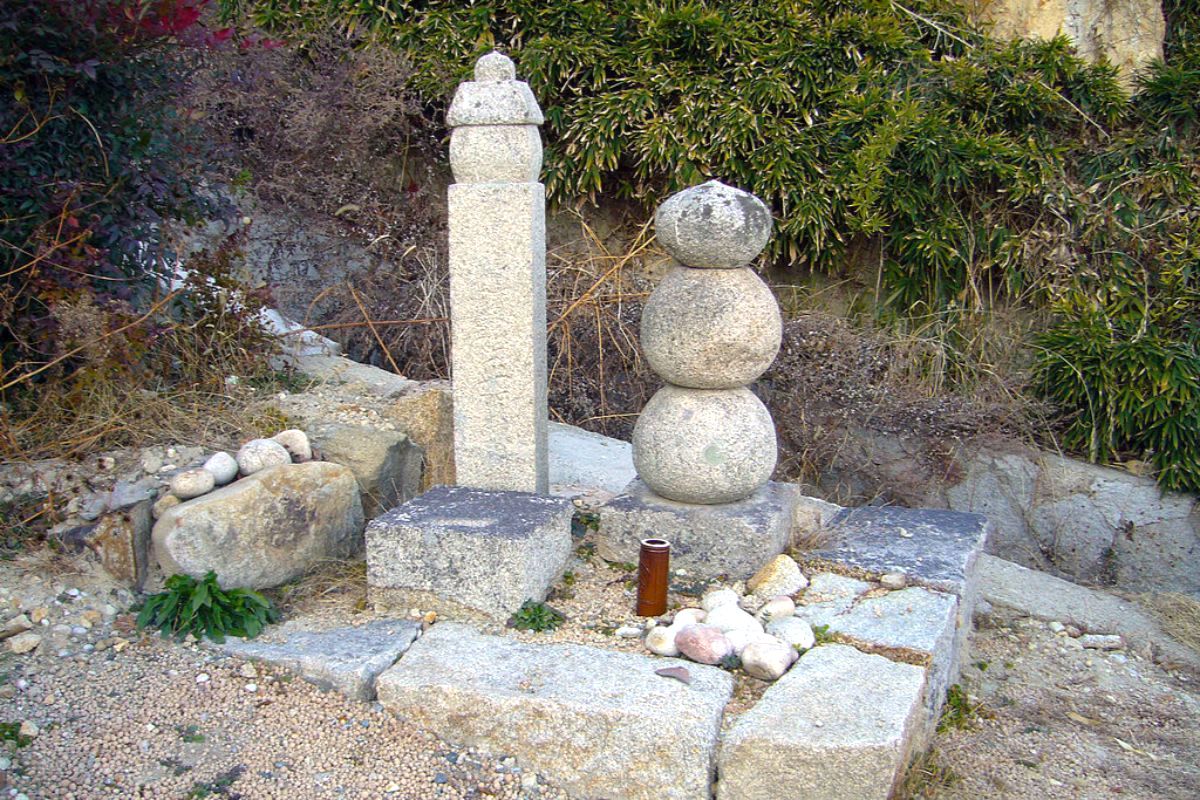 Hiraga Gennai, a scholar of the Edo period who studied Dutch literature, visited Tomonoura while traveling around various parts of Japan. He told the people he wished to be enshrined as Daimyo-jin (a Japanese god) when he left Tomonoura and the seishi (a monument commemorating a living god) was founded.

A massive ishigaki with a historical atmosphere – Tomo-jou-ato 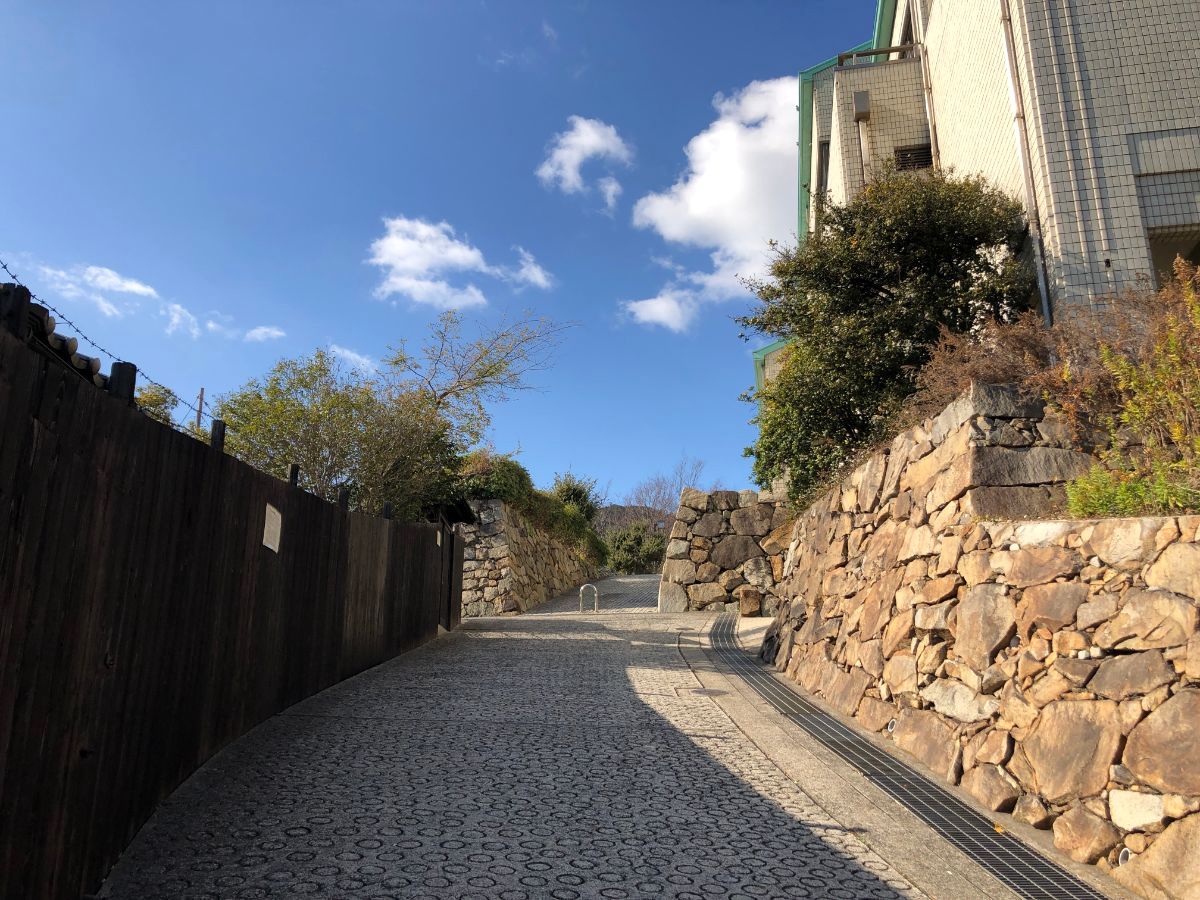 Tomo-jou (castle) used to be located on the hill where the Tomonoura History Museum is built today. Unfortunately, Tomo-jou castle was demolished, but its massive ishigaki has been carefully preserved.

Check out our other walking courses for learning more about the history of Tomonoura and for visiting places related to Ryoma Sakamoto (a Japanese samurai in the late Edo period).