During my first few days in town, I repeatedly saw a ship in the style of an industrial-era black steam boat embarking from Tomonoura’s shore. It would cross the channel between the bay and Tomonoura’s famed Bentenjima Island before rounding the corner and disappearing beyond my line of sight. In turned out to be the ferry that runs throughout the day from Tomonoura to Sensuijima Island, which lies just beyond Bentenjima and is filled with lush green peaks and hiking trails, ideal for a half-day excursion. I decided to discover Sensuijima for myself.

The road to Five-colored Rock (Goshiki-iwa Rock) is completely closed. Please do not enter the sidewalk due to falling rocks. The detour route from the mountain side is also closed. We appreciate your understanding and cooperation. * The exact reopening date is undecided at this moment. Related inquiries Ministry of the Environment ChugokuShikoku Regional Environment Office / Hiroshima Office (Tel: 082-223-7450) Fukuyama City Tourism Division (Tel: 084-928-1042) 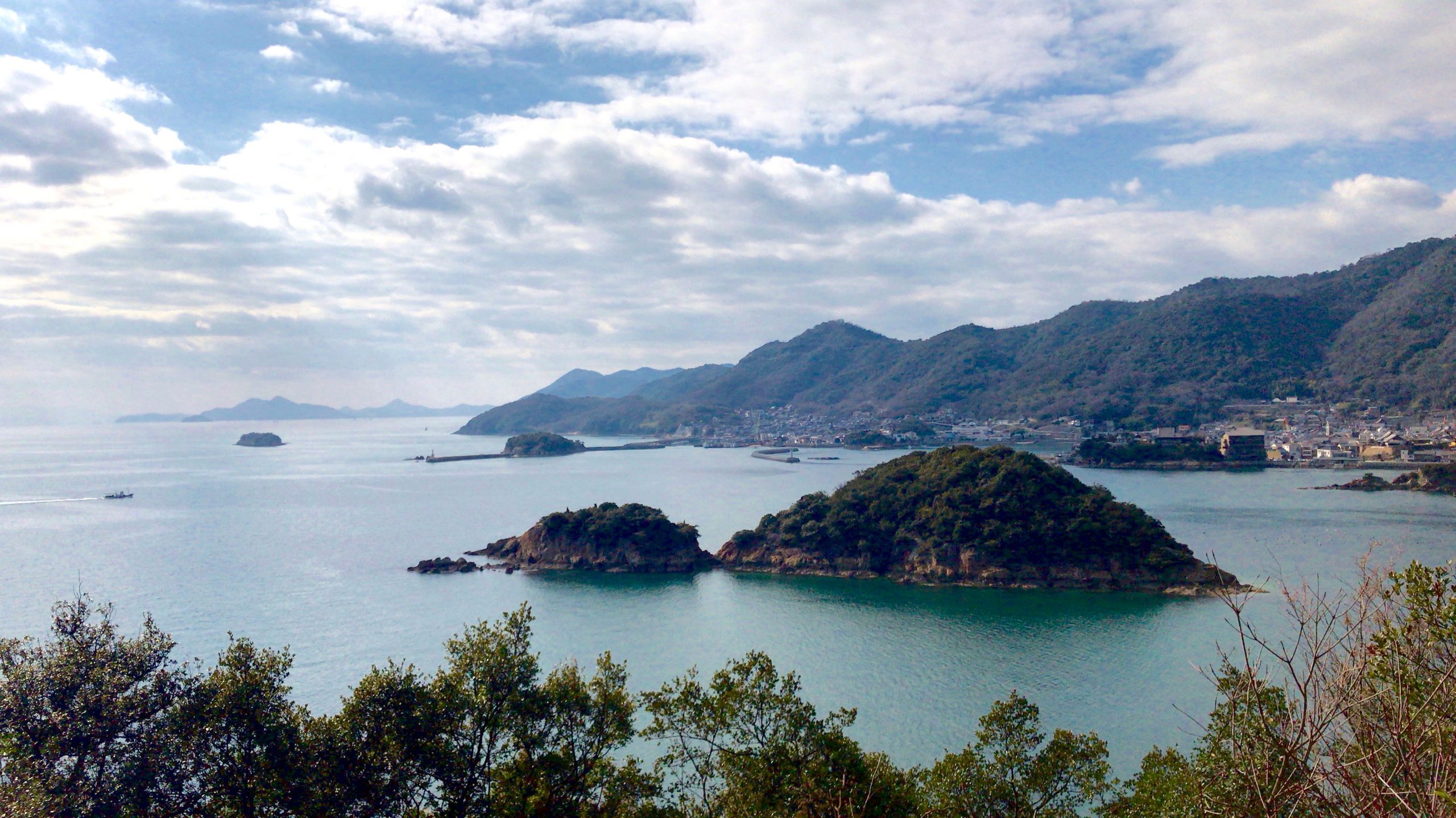 While I waited for the ferry to pull back into port, I stopped in the café on the second floor of the ferry terminal. Sipping on my hot chai, I looked out on a stunning view through the café’s floor-to-ceiling windows. The café owner asked what my plans where while I was in town and I explained that I was Sensuijima-bound. He kindly pulled out a map and brochure and recommended a trail route for the afternoon. 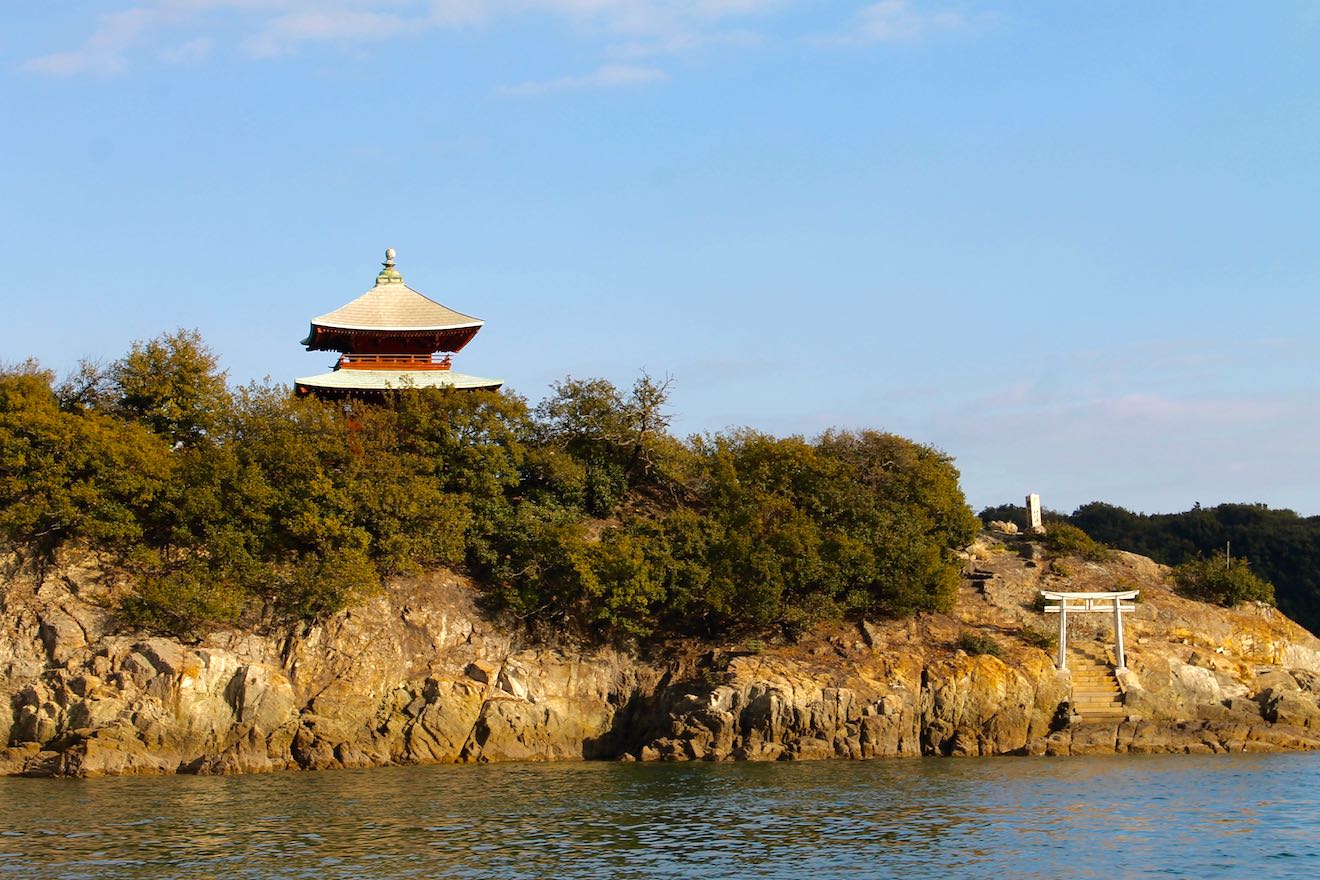 A popular spot for hiking and family outings, Sensuijima has one primary mountain with some smaller peaks dotting the periphery. In warmer months, the camping grounds and beaches of Sensuijima transform into a popular destination for local residents. There is even a beachside hotel that faces out on the Seto Inland Sea. I saw the ferry pulling into the terminal beneath me and told the café owner I’d take his advice. He suggested scenic route along the coast before beginning my ascent to Sensuijima’s highest lookout point. 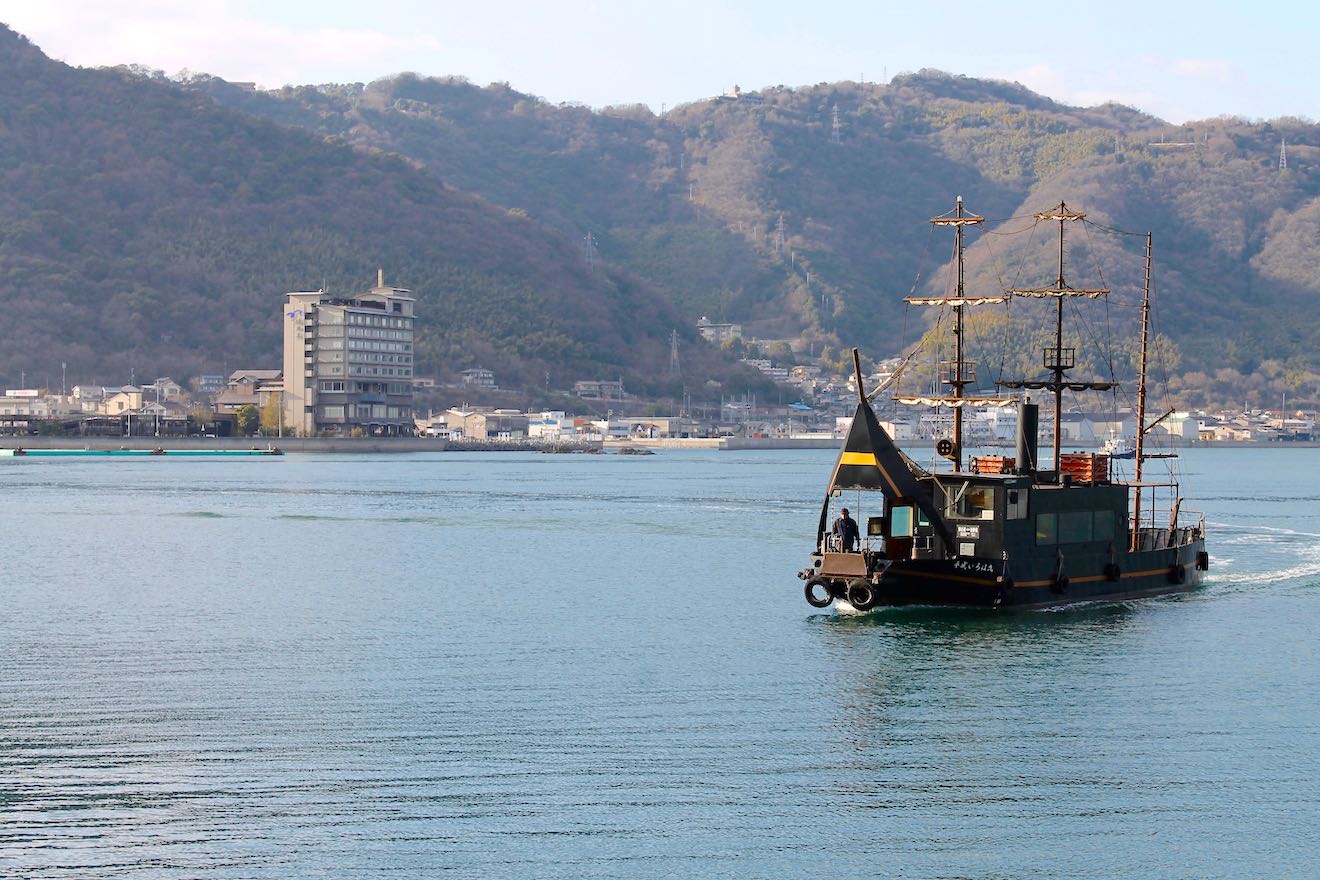 On a quiet Wednesday afternoon, there was just a few couples and a group of friends on the ferry with me. The retro-design of the ferry reminded me of the area’s rich maritime history and the many cargo ships of this kind that likely passed through Tomonoura bay.

When we finally docked at Sensuijima it was hard not to feel like I had an entire island to myself, and I was definitely eager to explore. I began by following the coast, passing the main resort to reach a secluded path along the island’s rocky shore. Sensuijima, like most of the Setouchi Region, features a harsh but beautiful coastline, filled with cliffs and eye-catching rock formations. Some of Sensuijima unique geological characteristics are marked with signs along the seaside path. 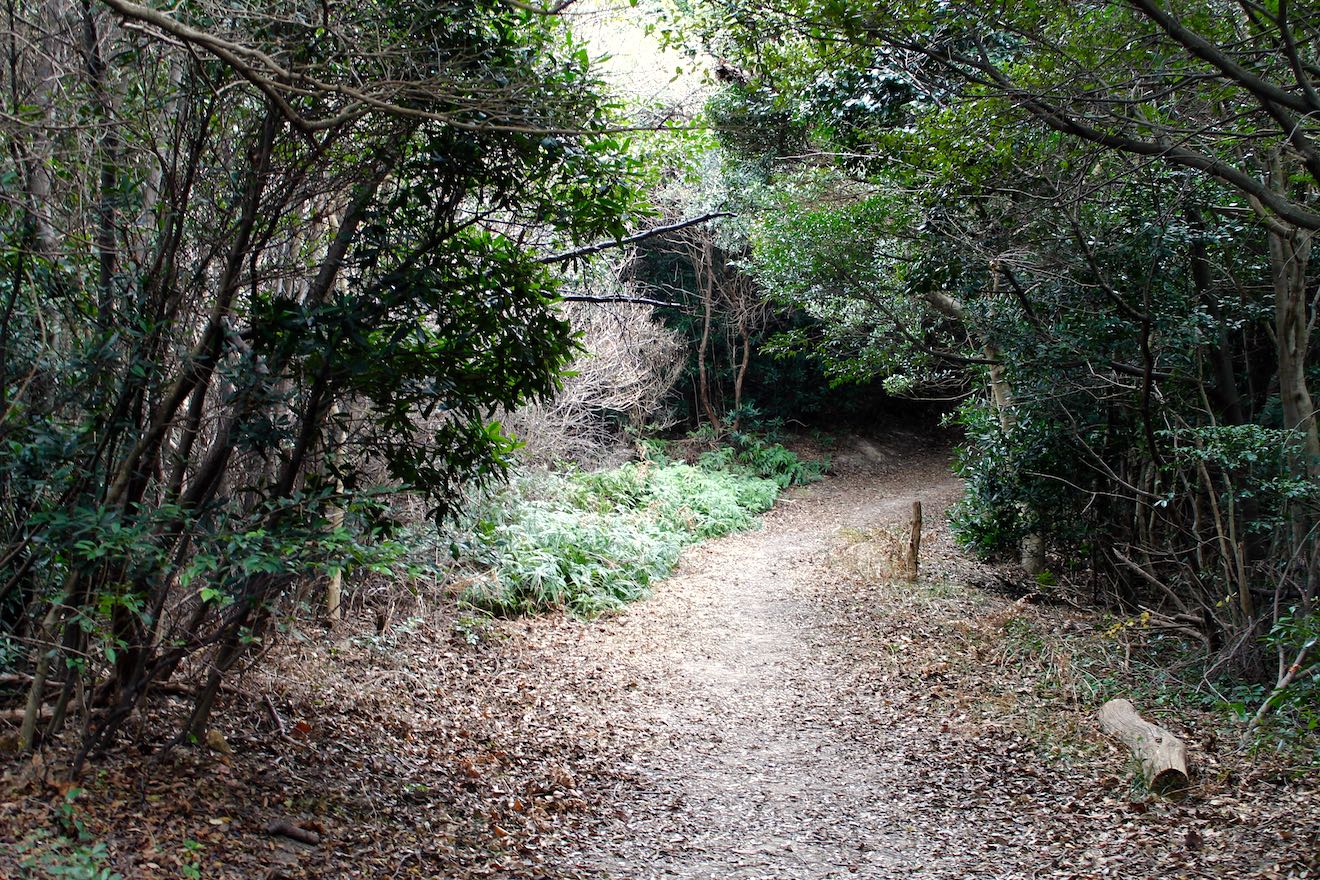 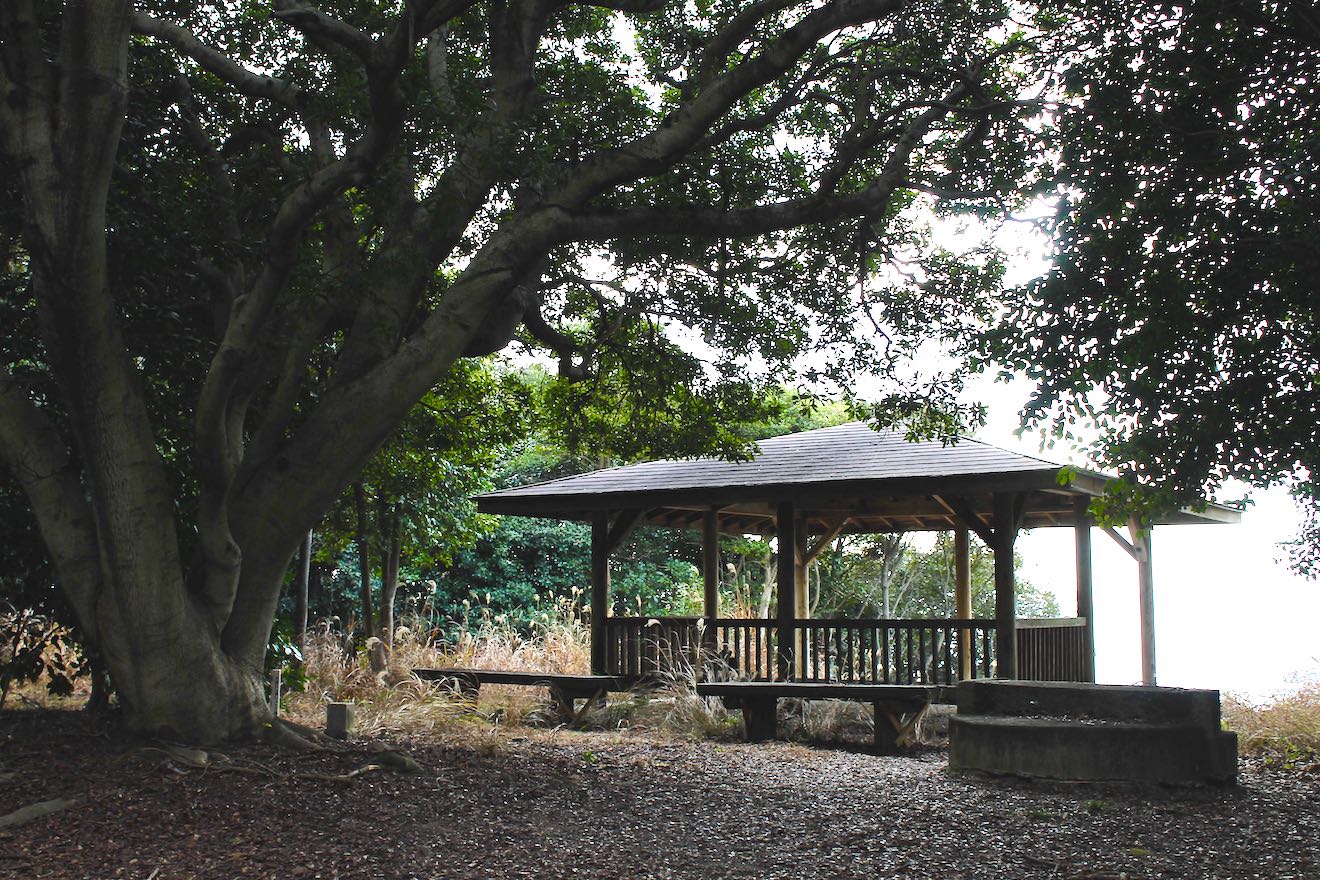 After strolling along the coast for about 20 minutes I reached the far side of the island, facing away from Tomonoura and the Honshu coast. It was here that I finally decided to start my climb. My first destination was the lowest peak, but the view I earned at the top was far from a disappointment. After climbing through a forested trail, filled with ferns and a thick canopy, I came out on a clearing. Two benches were placed under a wooden roofed pavilion. I took a seat and admired a gorgeous vista. Surrounding me in three directions was an expansive sea, with the silhouettes of distant islands dotting the horizon line. I could also make cargo ships, small dark dots in the distance, making their journey from Shikoku to Honshu. Even though it was a cloudy afternoon, the sun broke through the overcast at times, casting an ethereal glow on the waters below. I decided to appreciate this view over a few snacks, an onigiri (rice ball), a mikan orange and bottle of jasmine tea I had packed in my bag. 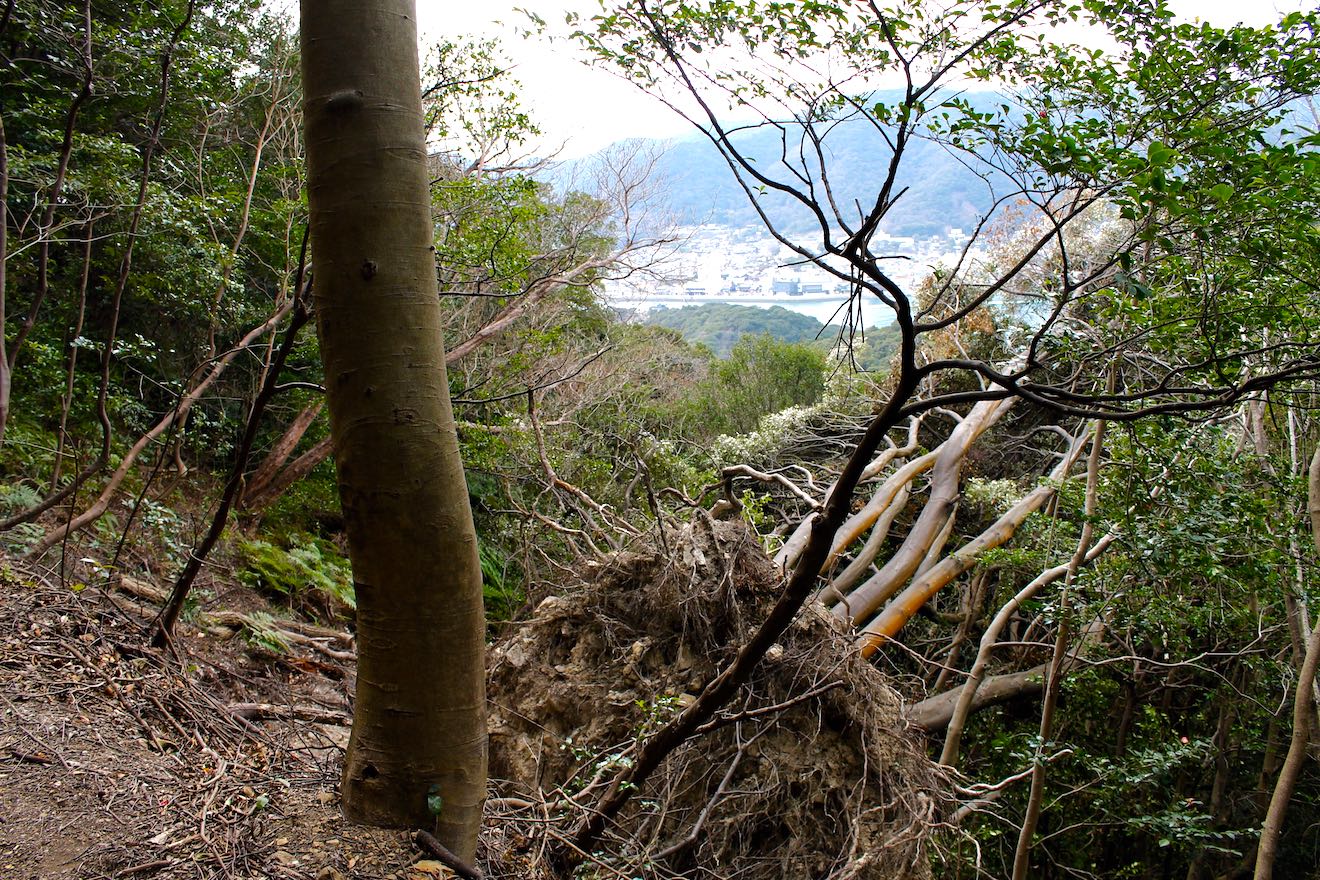 After catching my breath, I retraced my steps down the trail before continuing my climb. From here the trail grew steeper, for one short stretch even turning into an earthen staircase that ascended through a vine-filled forest. There had been heavy rainfalls in the region the previous summer that caused minor landslides in parts of town. I saw some scars on the trail, with one tree having been completely uprooted from the hillside. 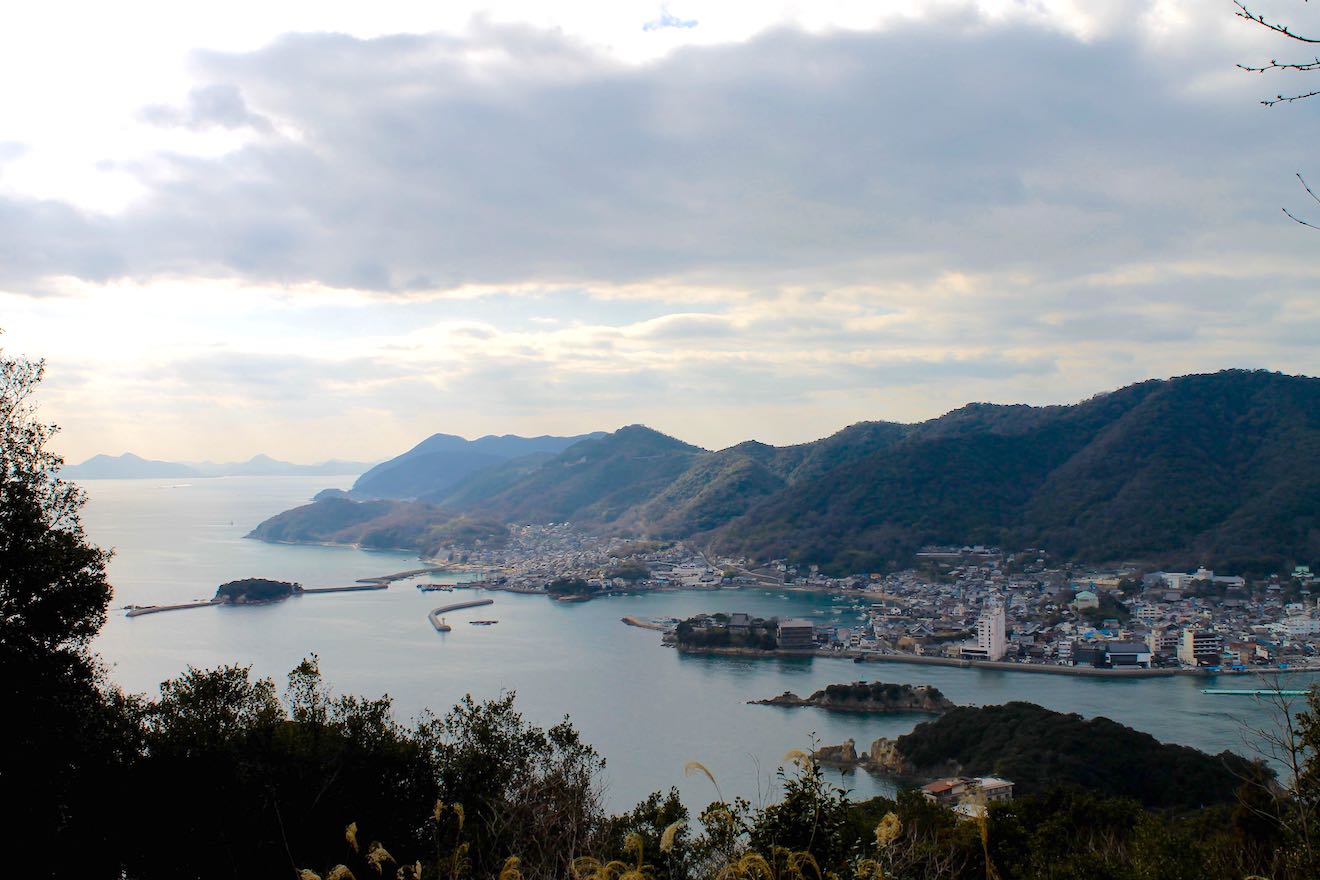 By the time I finally reached Sensuijima’s final and highest peak, I was tired and sweaty but felt accomplished. The lush forest of Sensuijima provides, in effect, delayed gratification. While you can’t make out you progress as you ascend, when you finally reach the clearing at the peak and step up to the view, it can leave you breathless. The pay off from the final peak was a view of the town in its entirety, the historic lighthouse and industrial steamboat just barely legible, and the impressive coastline stretching into the distance.