Although the number of fishermen is decreasing in the port town of Tomonoura, they are still fishing every day. Their fishing methods vary depending on the season and they type of fish. Once a fish is caught, it is put into a container on the ship and brought immediately into the port to maintain its freshness. When they arrive, they are immediately sorted and bought by wholesalers who are waiting at the port, then sold to fish retailers or local restaurants in Tomonoura. They are also sold at the fish stalls in the town where locals in Tomo Town or nearby areas can purchase and enjoy them.

Thanks to the seafood of the Setouchi

The fishermen’s work starts early in the morning.
On this winter morning at half-past six, Kōzō Hada, leader of the Tomonoura fishery cooperative society, always pilots his beloved vessel, “Ryusei Maru”, alone.
The weather forecast for today was clear and sunny. After passing Sensuijima Island, the harbor disappeared into the darkness. After sailing across the dark sea for about 30 minutes, we finally saw the sunrise. 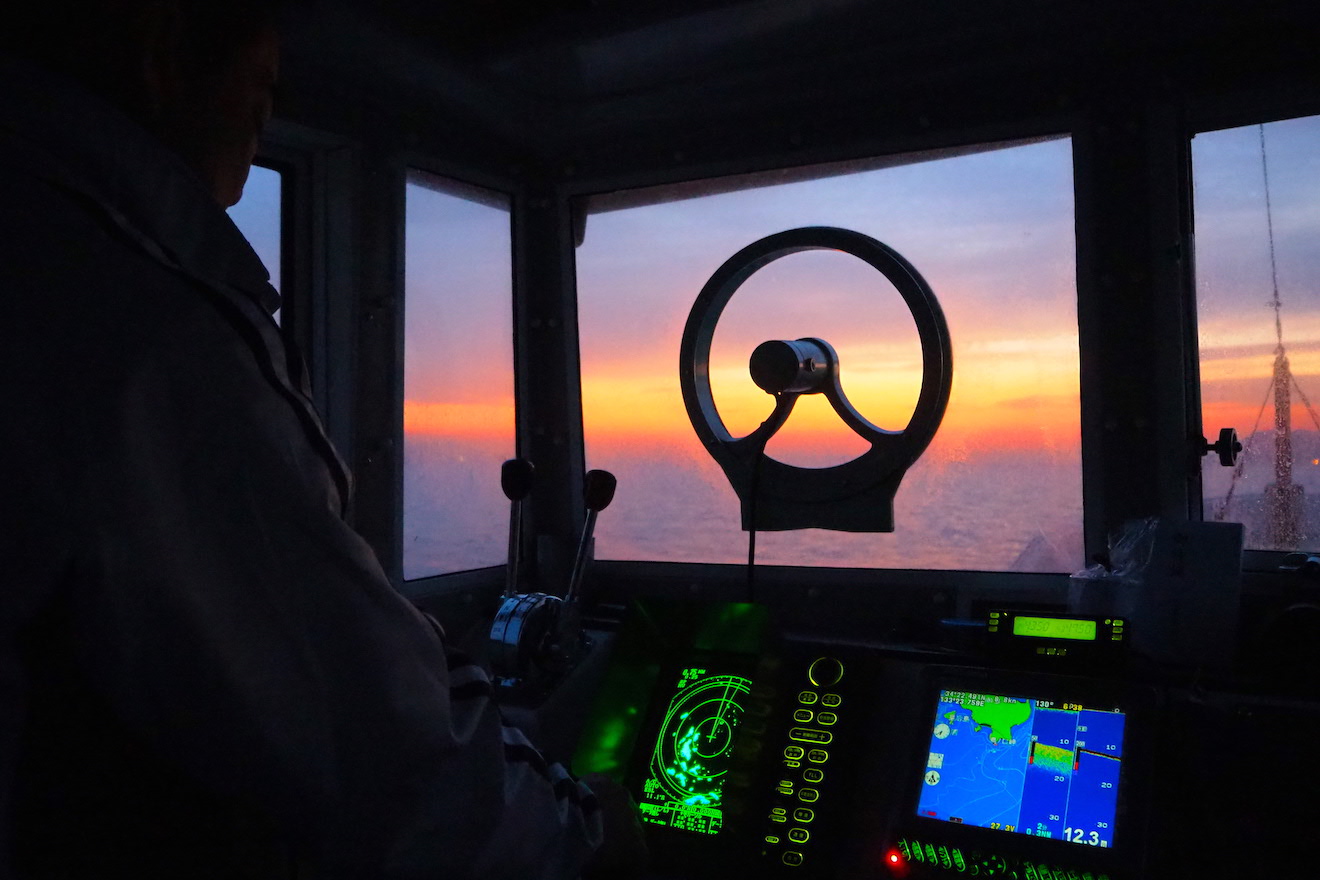 A radar for detecting obstacles and a monitor for checking location was lighting up the pilothouse that was just large enough to accommodate three adults at once.

In the winter season in Tomonoura, bottom trawling is the main method used to catch fish. His targets for today are Kochi (flathead), Hirame (sole), Gencho (a kind of tongue sole), and the delicious winter jewel of the Setouchi, Watari-gani (blue crab) at the bottom of the sea. 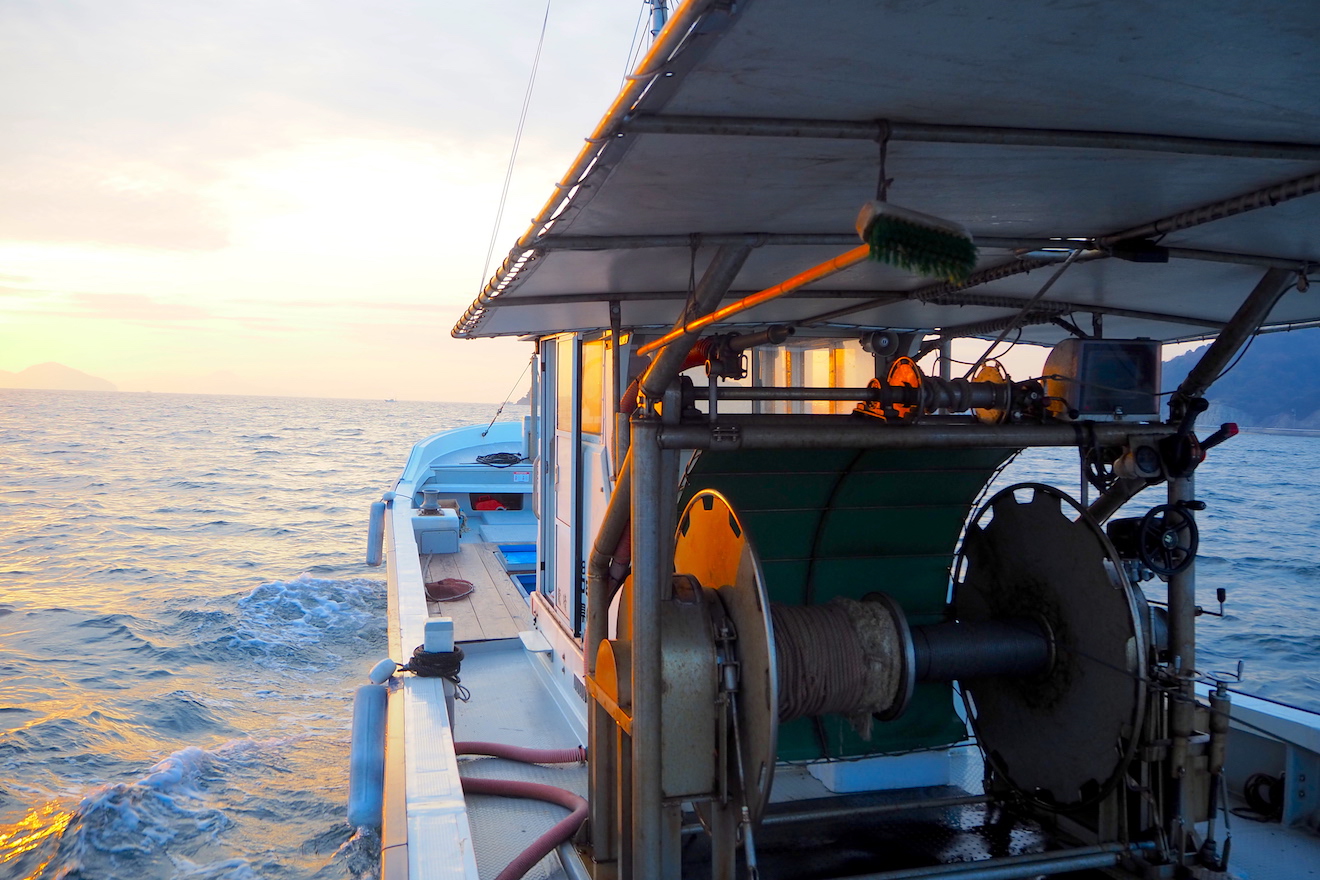 When we arrived at the fishing area, the sun had fully risen above the horizon.
After slowing down the boat, Hada, who came out on the deck, threw a heavy, thick, wire net into water and let it sink to the bottom of the sea. Then he piloted the boat in an arc while accelerating. Hada explained that the differences in the method to attract the fish varies according to the fisherman. Based on his many years of experience, he had hand crafted a trap to catch the fish. 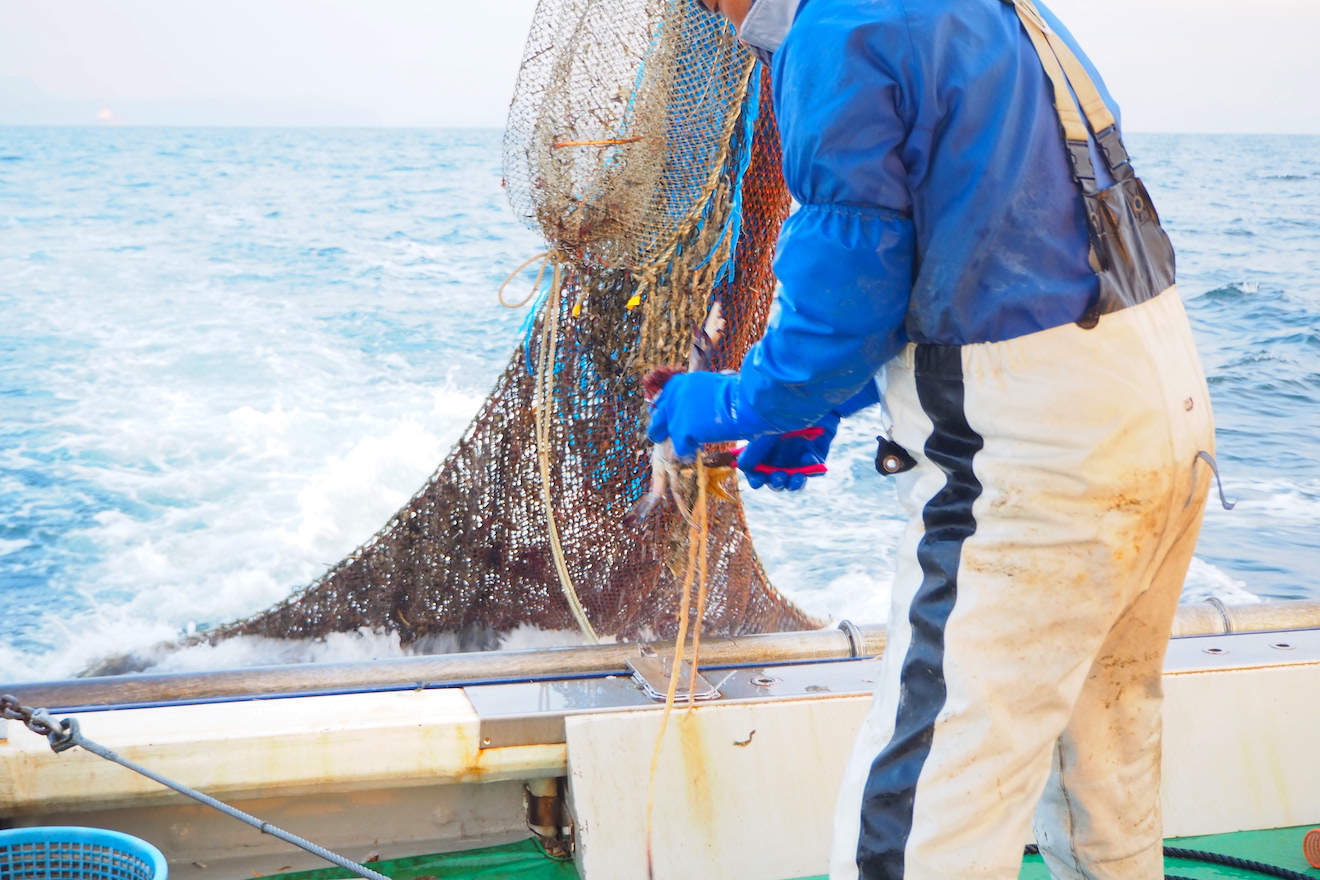 A few minutes later, Hada came out on the deck again. Rattle rattle rattle ……! He pulled his favorite old wire trap with the large roller and the net out of the water together. 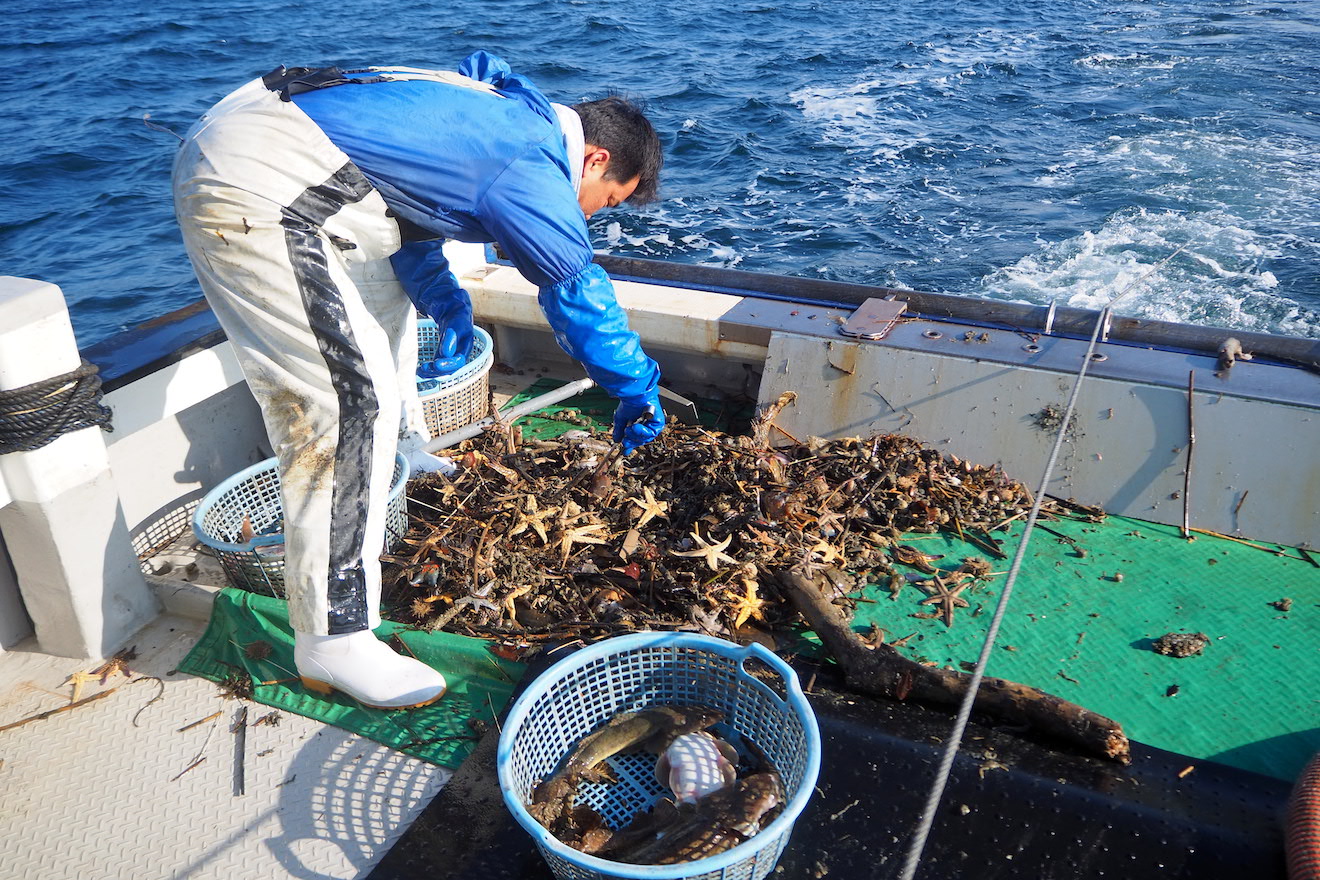 At first glance, it appeared there were only wood chips and starfish in the net.
Where are the fish …? But don’t worry; just look closely. Hada picked out one fish after another from among the chips of wood. Big flathead, stonefish, sole, shrimp, and blue crab!
He sorted them into baskets and put them in the ship’s cage. After that, he cleaned off the deck and immediately threw the net into the water again. 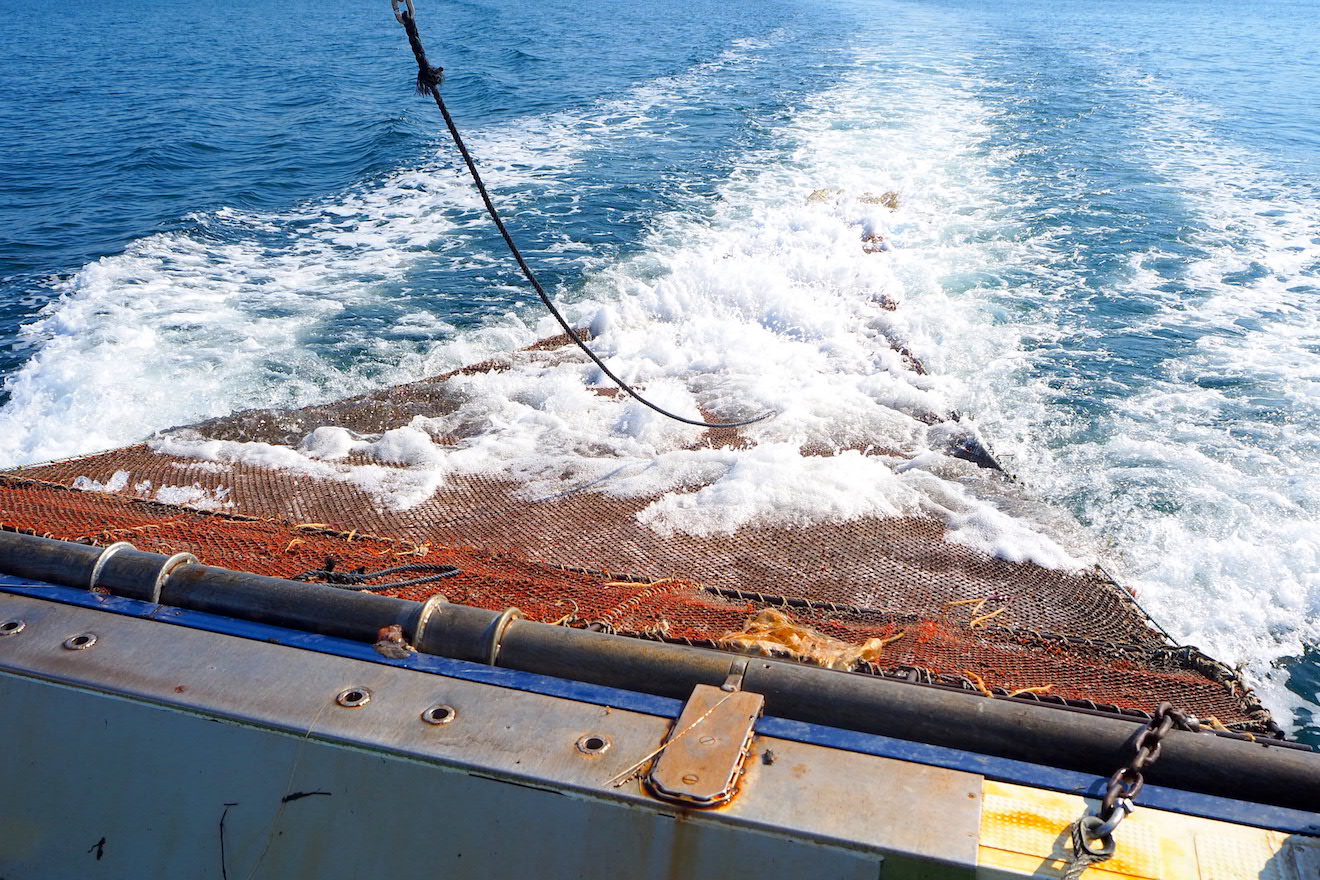 When you think about what bottom trawling is, you might imagine that it scoops up all the fish at the bottom of the sea. However, it isn’t so simple.
“Because we are only trawling a few square meters in the immense ocean, the amount of fish that we catch can change with only a slight shift in the position of the net. Thus, we often end up with a net full of just wood chips.” Bottom trawling is like trying to sweep up the desert with a dust broom; it is impossible to know the results until you do it. 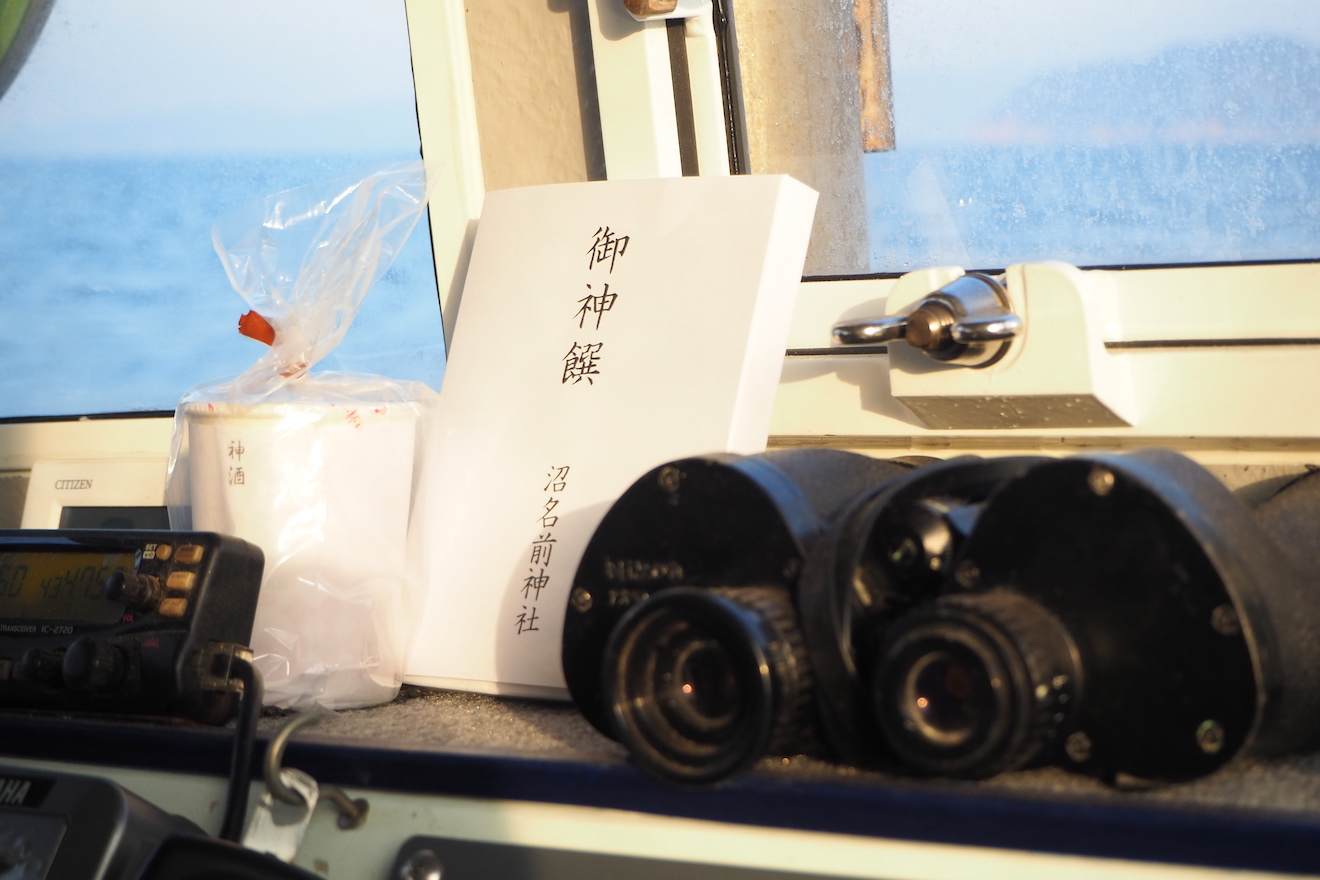 Hada keeps his eye on the sea while he tries not to think about whether he will catch any fish or not. In the pilothouse, there is Goshinsen (place foods offerings) and Omiki (sacred sake) dedicated to the god of the sea enshrined at Nunakuma Shrine in Tomonoura.

On that day, Hada threw his net over 10 times, fishing for over 6 hours. 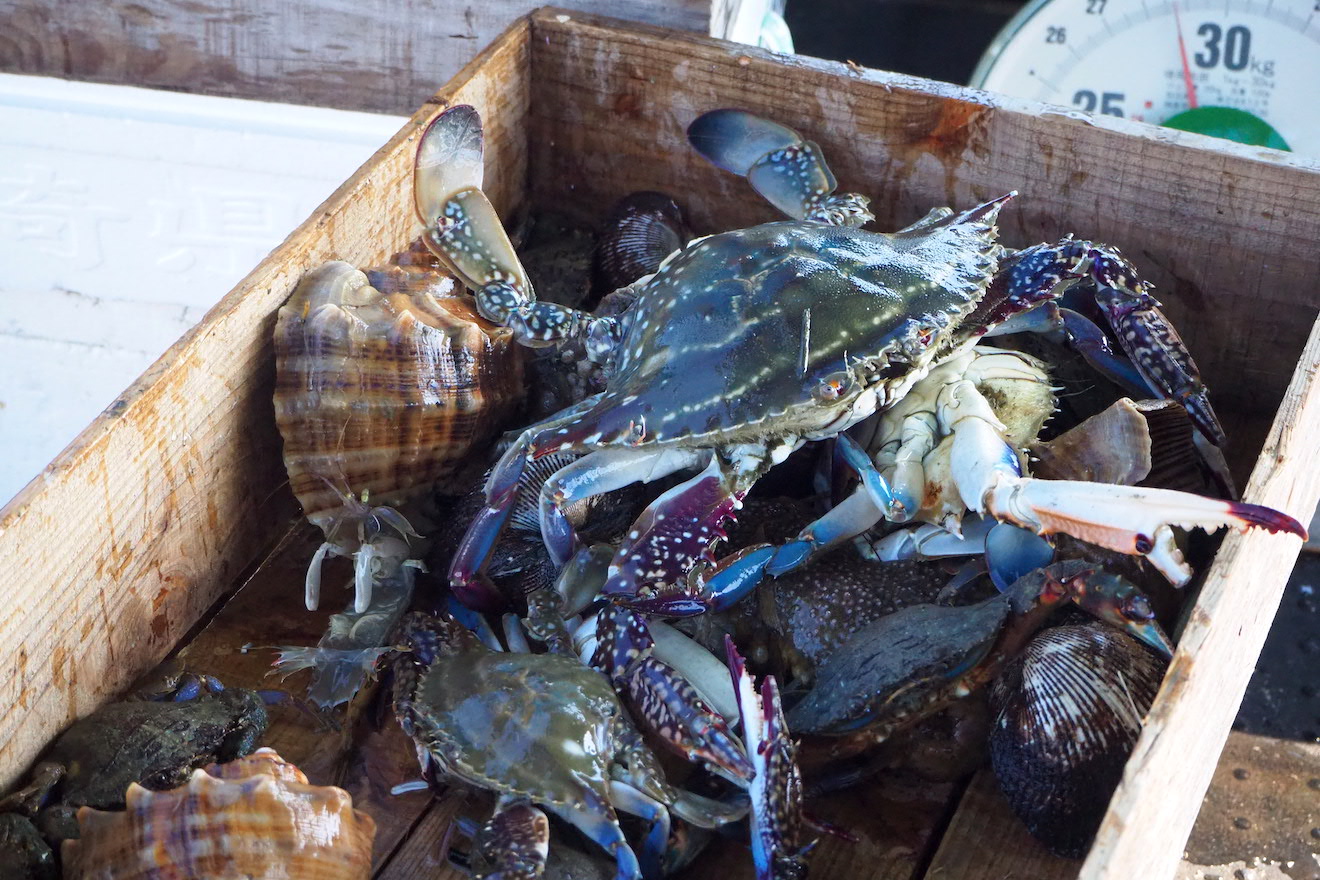 Proud work of the fishermen in Tomonoura to the future

As soon as his fishing is done for the day, he returns to port where wholesalers are waiting for him. He delivers his catch to the wholesalers from the ship’s cage.
Hada laughs, saying, “I trust wholesalers. I just give them fish and they give me today’s profit. This is because of our long and strong relationship.”
I felt that I had caught a small glimpse of the fisherman’s life. 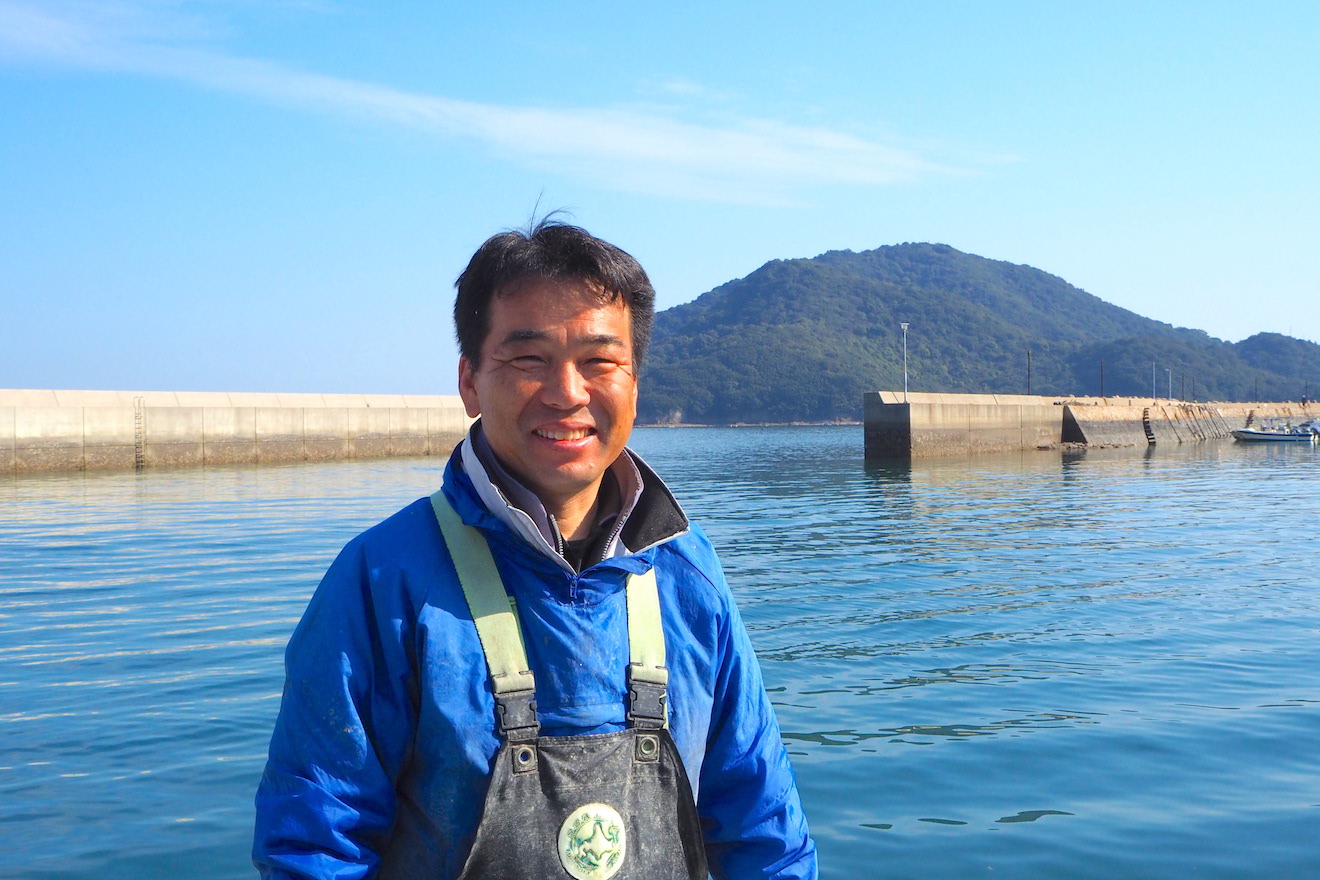 “Fishermen in Tomonoura are getting older and the number of fishermen has been decreasing. Perhaps now, I am the youngest.”
While I felt a little sad about what he said, I also felt the grit in his words and his will to continue his work as a fisherman.
I hope this sea will again be filled with fishing boats and the spirit of the fishermen will again be as it once was. Hada’s words, along with his determination make me believe it isn’t just a dream, but a reality for the future.

Ever since my fishing experience, I’ve promised to eat more fish to support the fishermen of Tomonoura.