Many suburban Americans will recognize the sound of an ice cream truck jingle. For those who haven’t experience the rush of excitement many children feel when they hear a mobile ice cream shop rounding the corner of their block or the satisfying first lick of a popsicle on a hot afternoon, they may recognize them from American films and TV. Well, Tomonoura has its own take on this retro-America classic, a rural seaside variation, only the music has less twinkle, and the popsicles have been replaced with the fresh catch of the day. 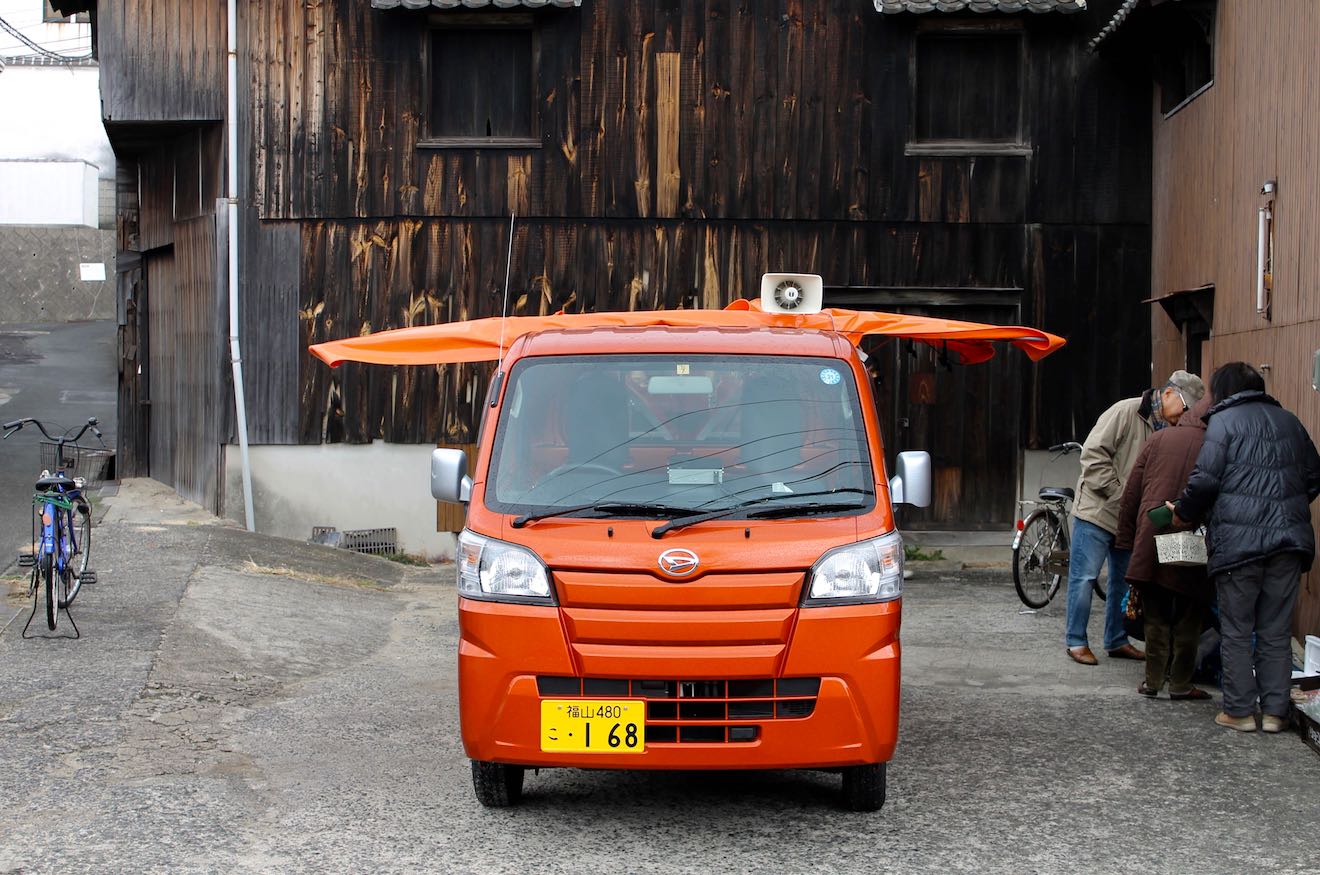 Making several designated stops in town over the course of the week, Kinugasa Mobile Fish Market is a unique addition to the Tomonoura community. The truck itself wears a bright orange paintjob and is hard to miss. As its sides and trunk lift up, the truck transforms into a full-fledged fish stall, revealing an assortment of regional goodies displayed on ice. Unlike the childish refrains of an ice cream truck, Kinugasa ages up its music to match its clientele, with an eclectic soundtrack playing from the loudspeakers and alerting neighbors that Kinugasa is nearby. I swear at one point I heard a song better-suited for a Spanish bull fighting ring than Tomonoura’s cobblestone streets. 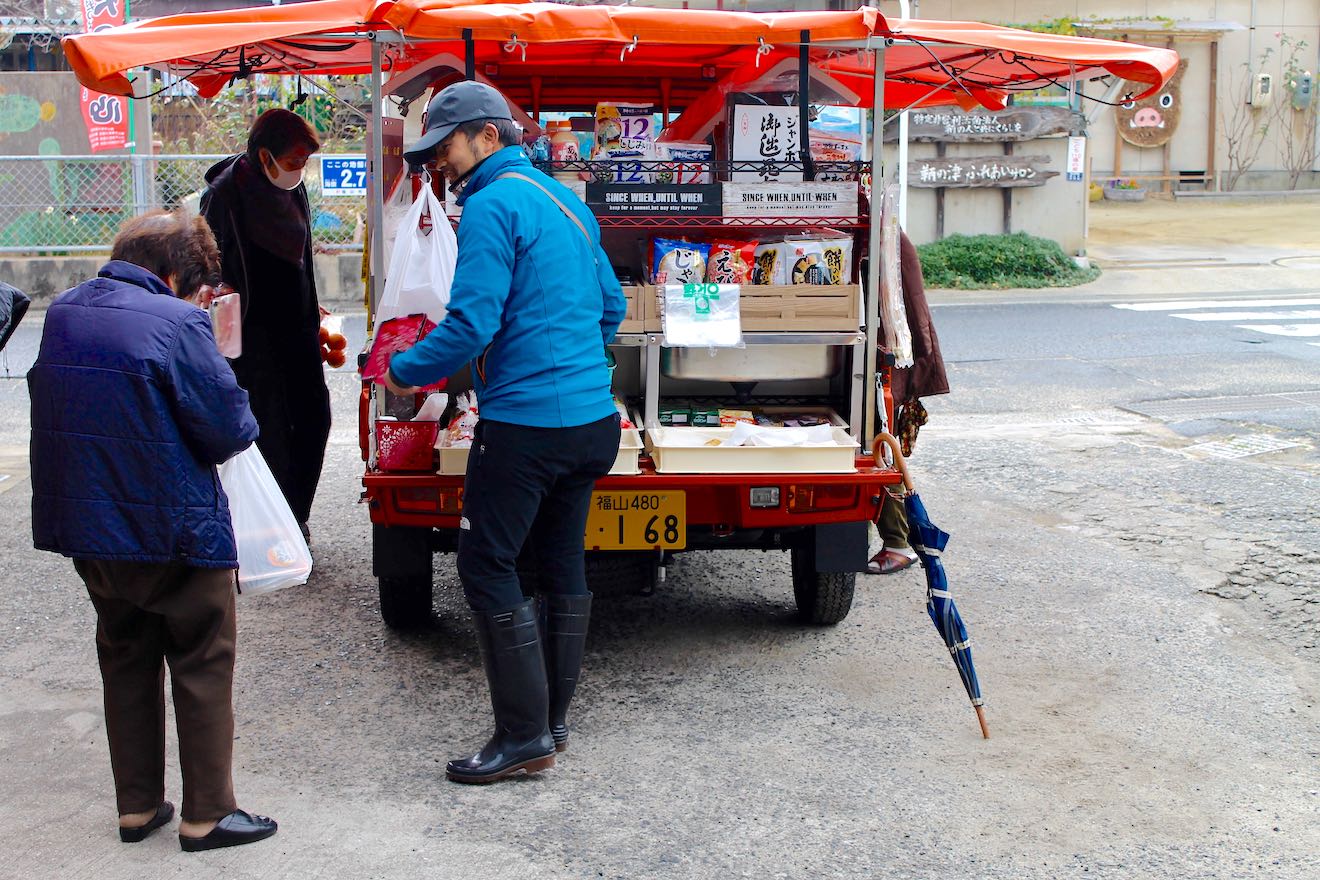 When I visited the stall at 10:00 on a Monday morning, I was happy to find that plenty of neighbors had heard the call. Shoppers had walked down the block from their house to browse the daily selection. On display that morning was everything from cod roe and mackerel, to crab and octopus. Packaged sea kelp products and tofu were stocked in packs, as were locally-made chikuwa (fish sausage) sticks, a local specialty. 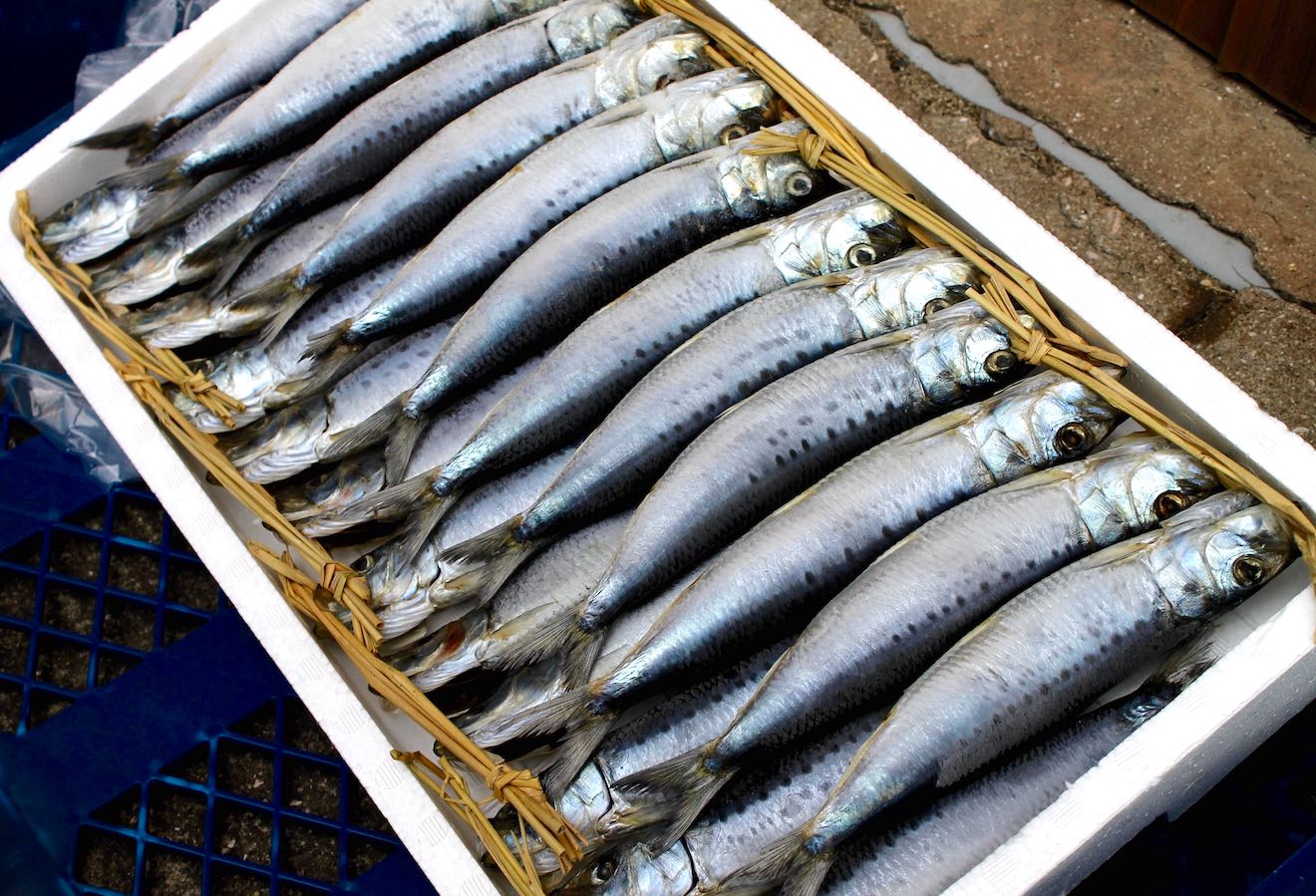 In Tomonoura, Kinugasa is More Than a Market

The owner and operator of the mobile market, Mr. Kinugasa, is a hometown resident of Tomonoura and for over fifteen years has been in the wholesale fish business. He regularly supplies products to the hotels and ryokan in town, but the mobile market is a fresh endeavor, filling a need in town after the closure of a local supermarket. 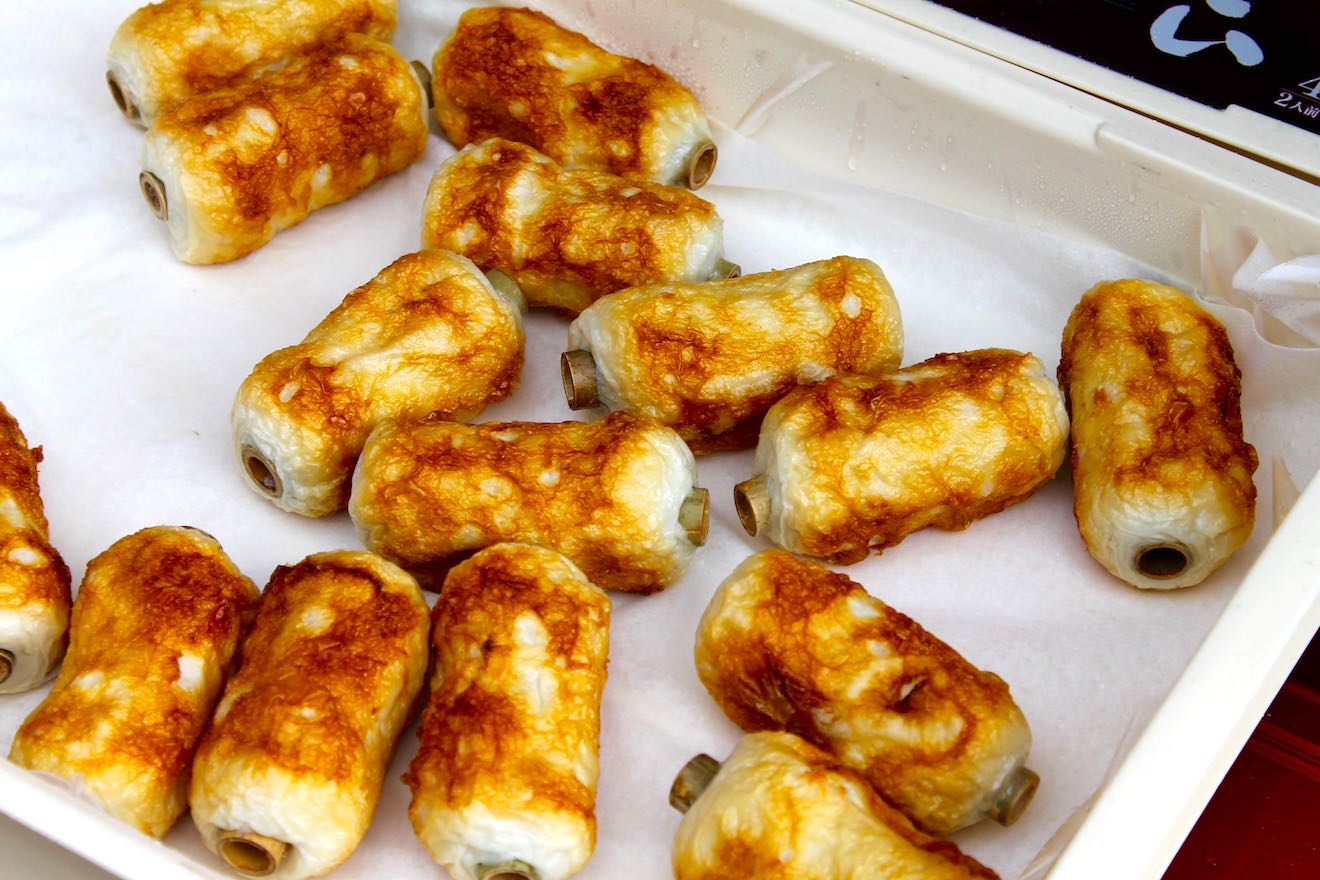 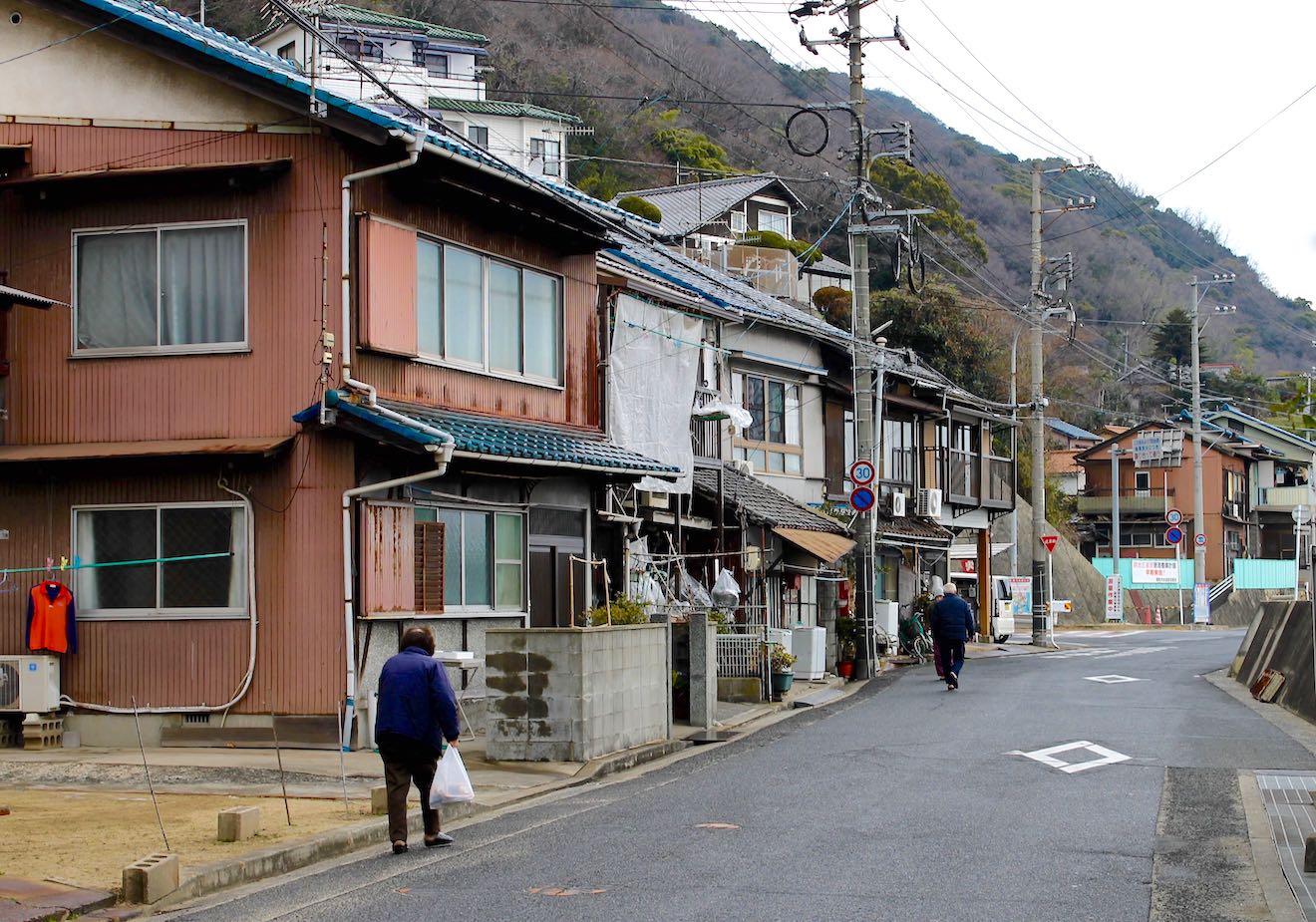 On the day of my visit, many of the customers turning out were the middle-aged and elderly. As Japan’s rural towns face aging populations, a mobile market service like the one Kinugasa provides is invaluable. More than bringing high-quality seafood to the doorstops of the town’s aging residents, the truck becomes a social hub. Neighbors greet each other and exchange small talk before peering into the trucks display crates to see what’s in stock that day. Kinugasa’s truck pulls into each of its four primary locations for one morning a week, acting as a momentary shopping and community center wrapped in one. 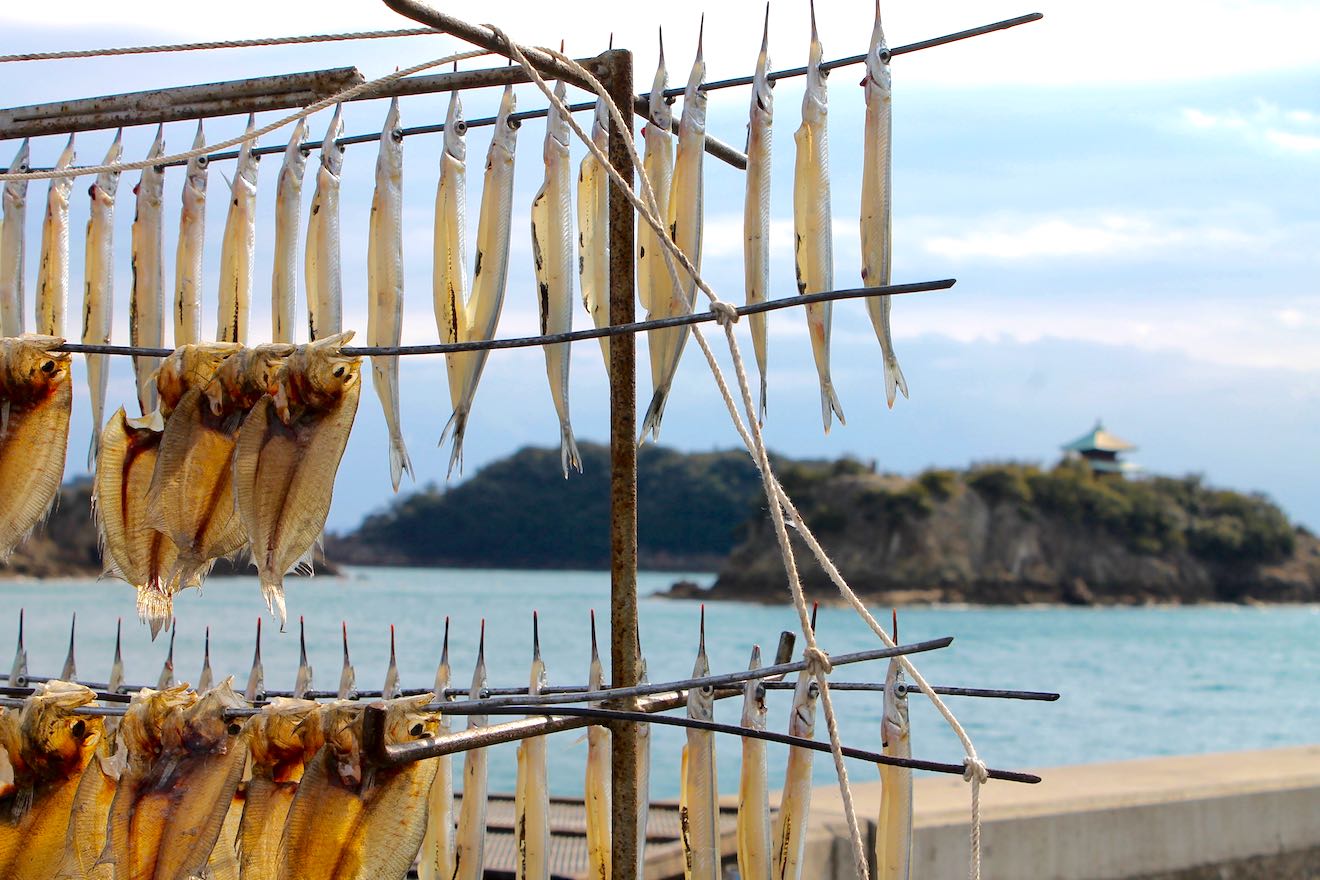 We followed Mr. Kinugasa to his next stop of the day. He drove a short distance, then parked in front of the seafood restaurant he runs with him family in town, facing the Seto Inland Sea. Here, fishermen had set up along the docks, gutting and hanging their recent catches in the sun to dry. From the shore you could make out Tomonoura’s iconic Bentenjima Island, with its two-story pagoda emerging from the brush. Side by side were symbols of the town’s seafaring past and present.