Kenshoji Temple — Meditation and Monster Trucks at a Buddhist Temple

I recommend Kenshoji both for the spiritual kanjingyo meditation and for the company of its charismatic priest.

Down one of the quiet back streets of Tomonoura, you’ll find the entrance to Kenshoji Temple. Dating back to the 1600s, this temple has long served practitioners of Nichiren Buddhism in the seaside town, with history worn on its wooden façade and ornate roof tiles. A visit to Kenshoji is not only an opportunity to enjoy the company of stray temple cats nad appreciate the altar’s extravagant golden embellishments, but also a chance to experience ascetic practice, in this case kanjingyo meditation. 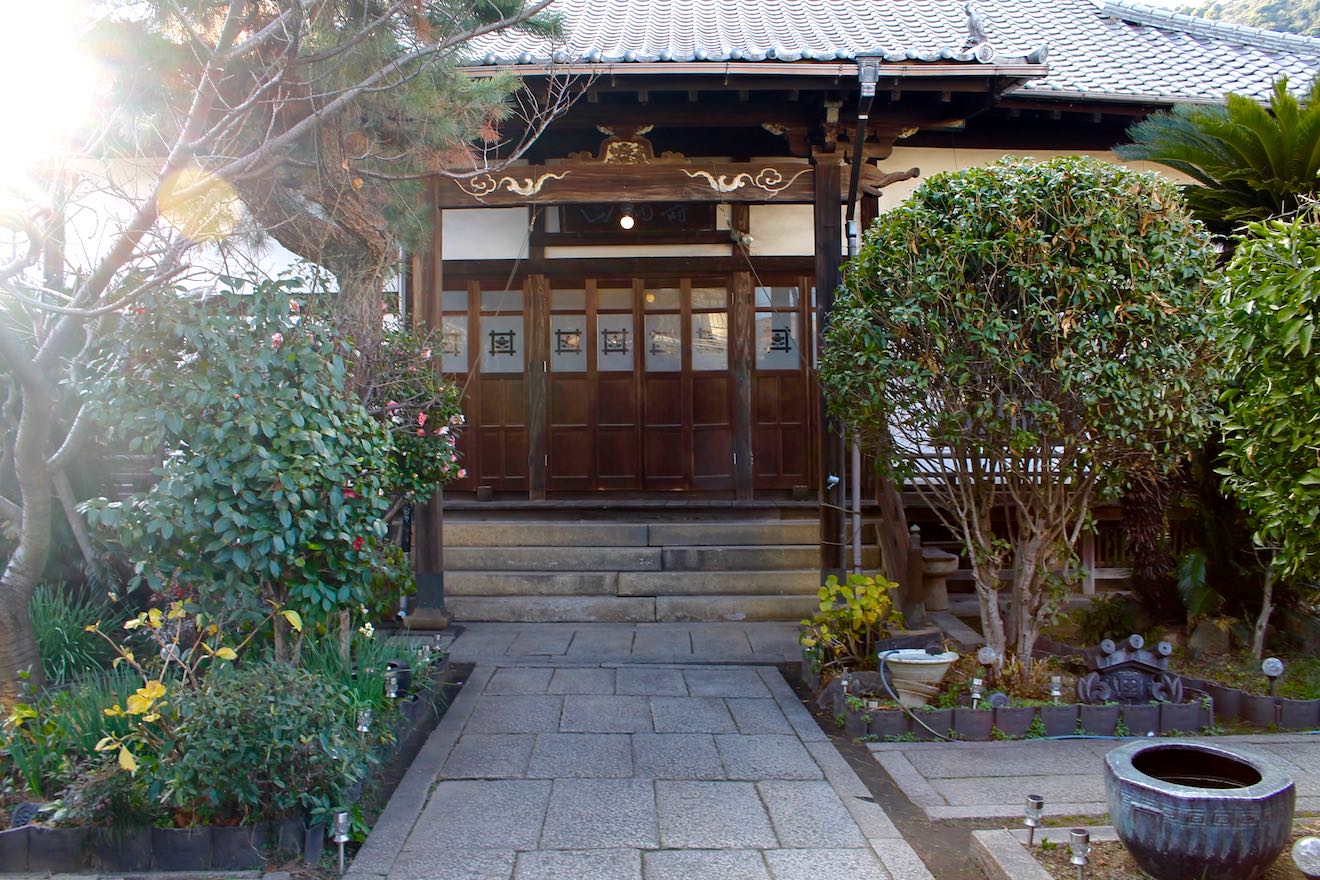 Asceticism is a religious lifestyle that requires self-discipline and the rejection of worldly indulgences. While an ascetic experience may sound intimidating, the Buddhist priest at Kenshoji, Suzuki-san, takes a more liberal approach than some of his peers. He welcomes the devout as well those without any prior meditation experience or familiarity with the tenants of Buddhism.

When I arrived at Kenshoji, Suzuki-san was dressed in athletic pants and a sweatshirt. He gave me a strong handshake and a warm smile. You could immediately sense his charisma—even the stray cats kept in tow, following him around the temple grounds. 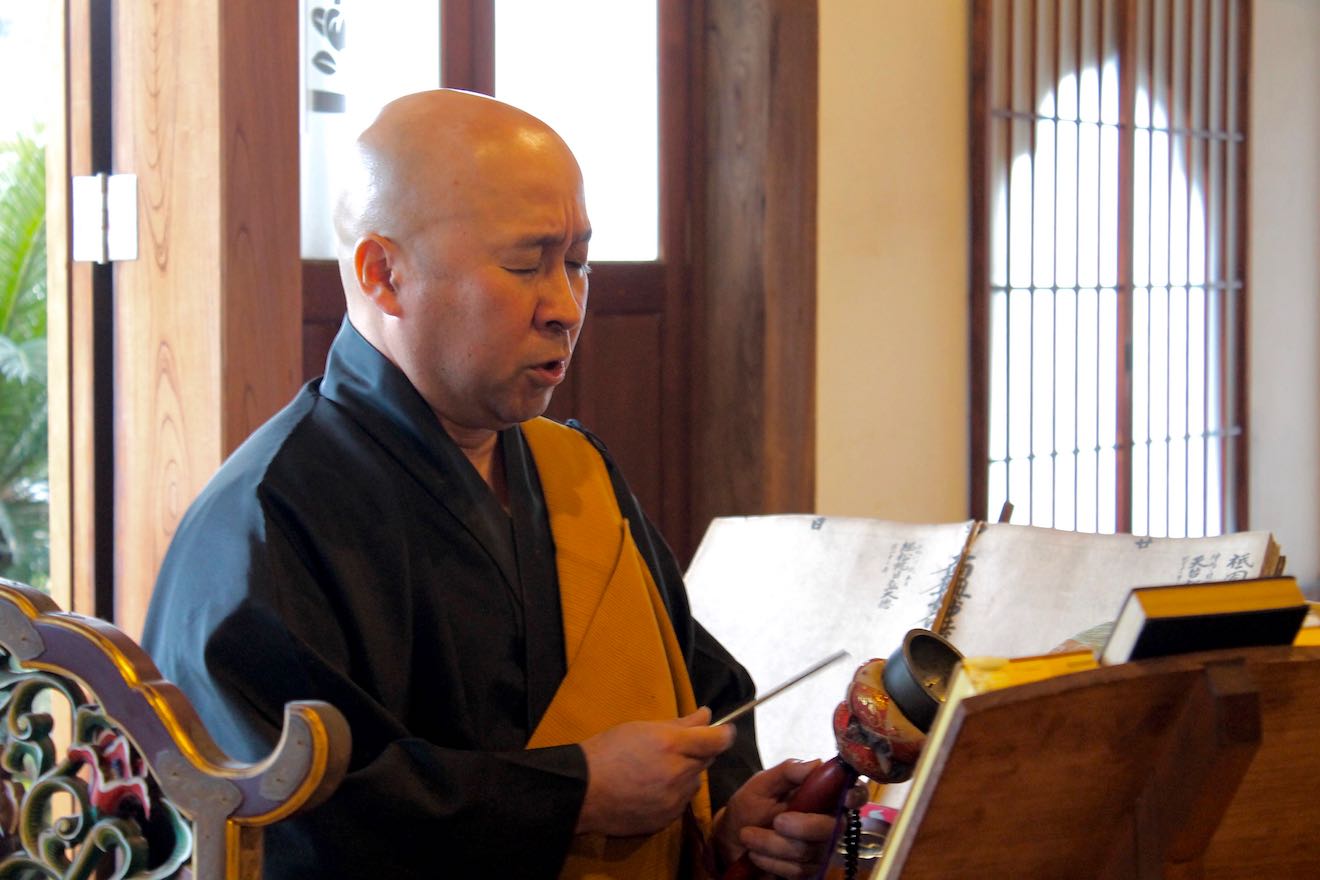 After a quick-change into religious robes, I met Suzuki-san in the main temple building to begin our kanjingyo session. He briefly explained the philosophy and simple procedure for this form of meditation, one unique to Kenshoji. Suzuki-san asked me to sit in the middle of the room, facing the altar. He lit incense then took his place behind me at a prayer dais.

Our session lasted no longer than fifteen minutes. Suzuki-san continually recited sutras, the repetition and monotone melodies of his voice producing a calming ambiance. His only request was that I close my eyes, settle my mind and look within myself. 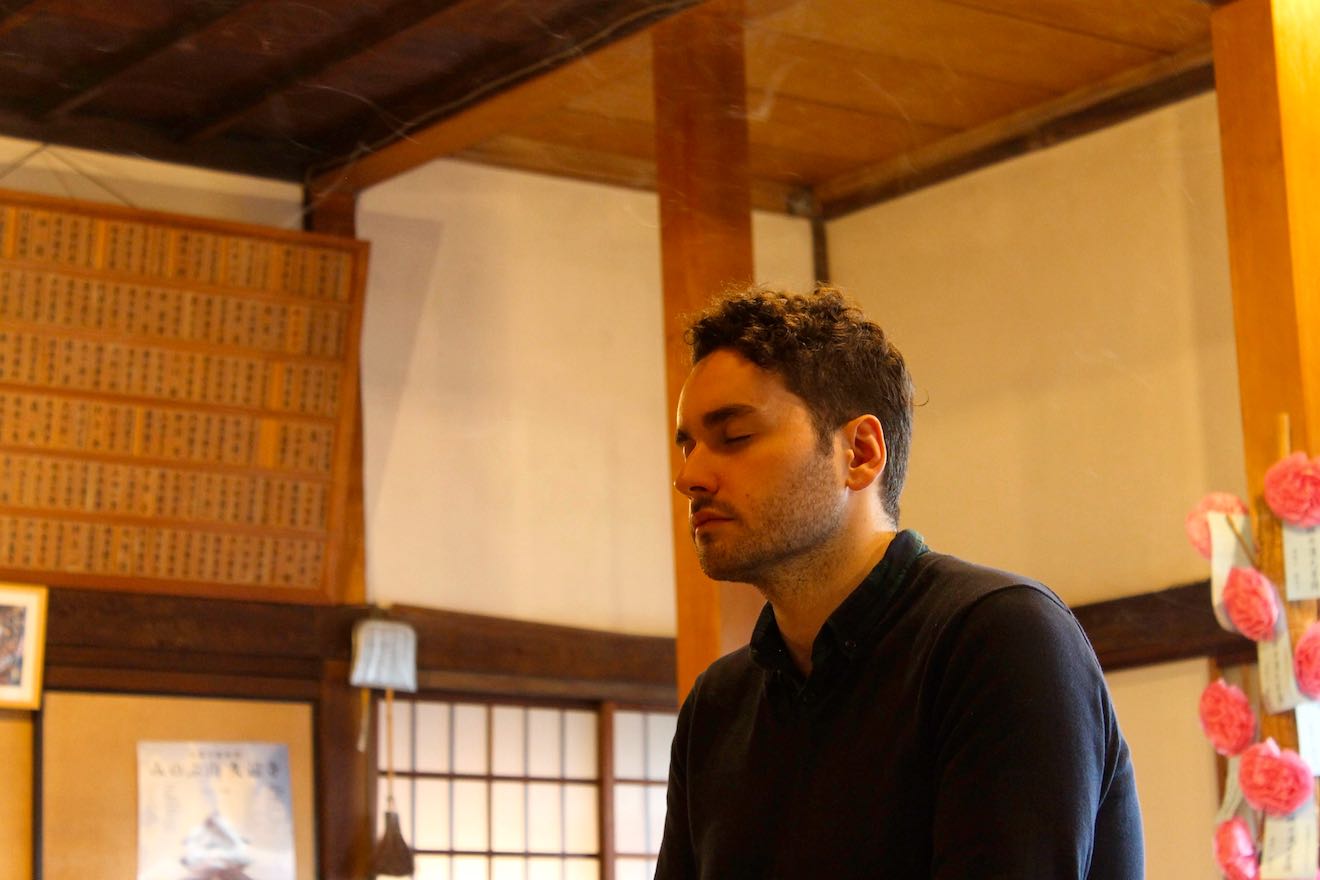 The three kanji characters for kanjingyo can be roughly translated to observation, heart and spirit, and journey. Nichiren Buddhism asks its believers to focus on the self, attributing inner transformation and empowerment to the creation of a more peaceful world. Suzuki-san tries to facilitate this self-examination with those who don’t have formal meditation training. 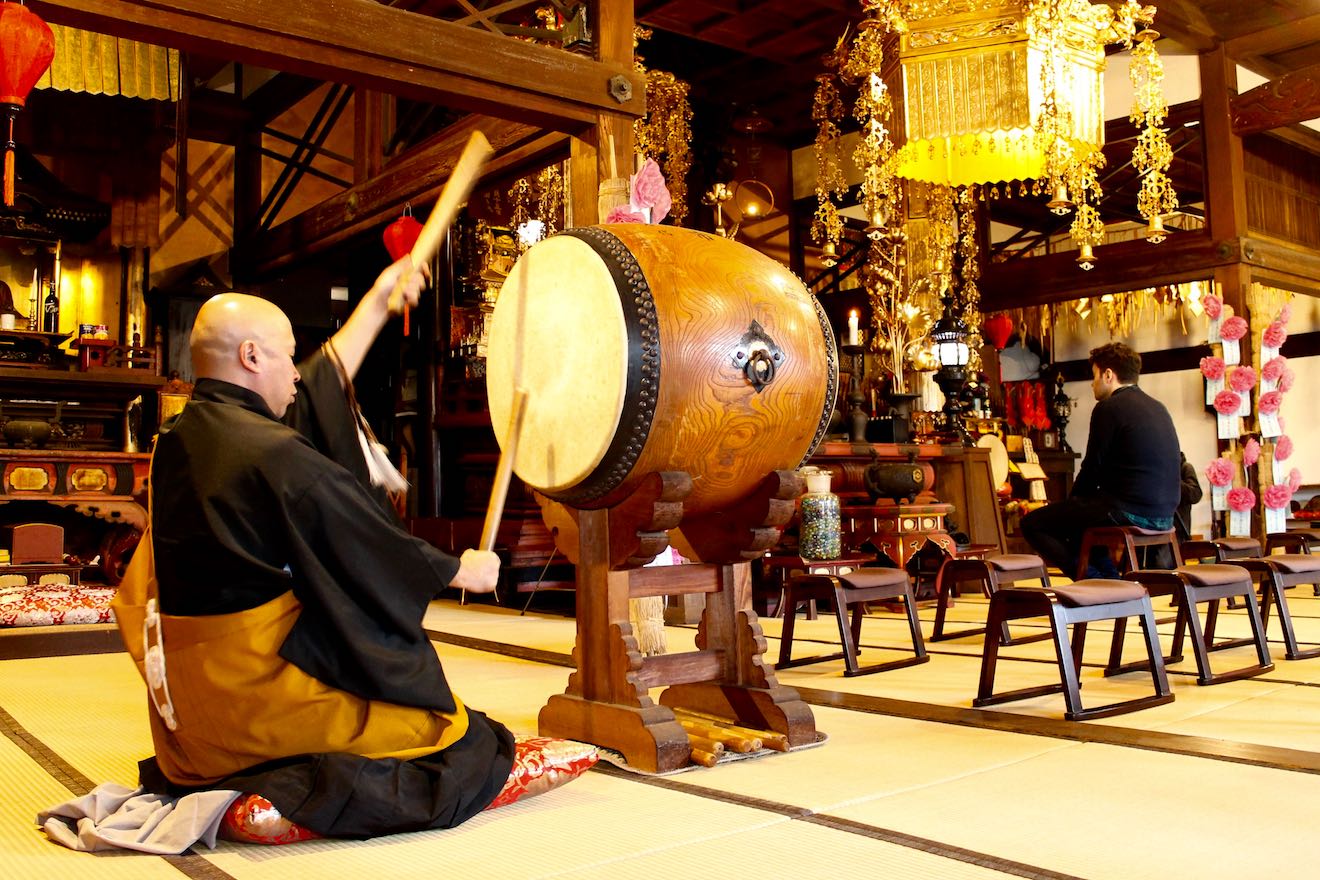 After several minutes of uninterrupted sutra recitation, Suzuki-san moved to one side of the room where a taiko drum was assembled. He continued his sutra chant while playing the drum, filling the room with the impressive resonance of the taiko. I could feel the vibrations of the drum on the soles of my feet and in my chest. It removed me even further away from my daily anxieties, quieting my mind for that short session. 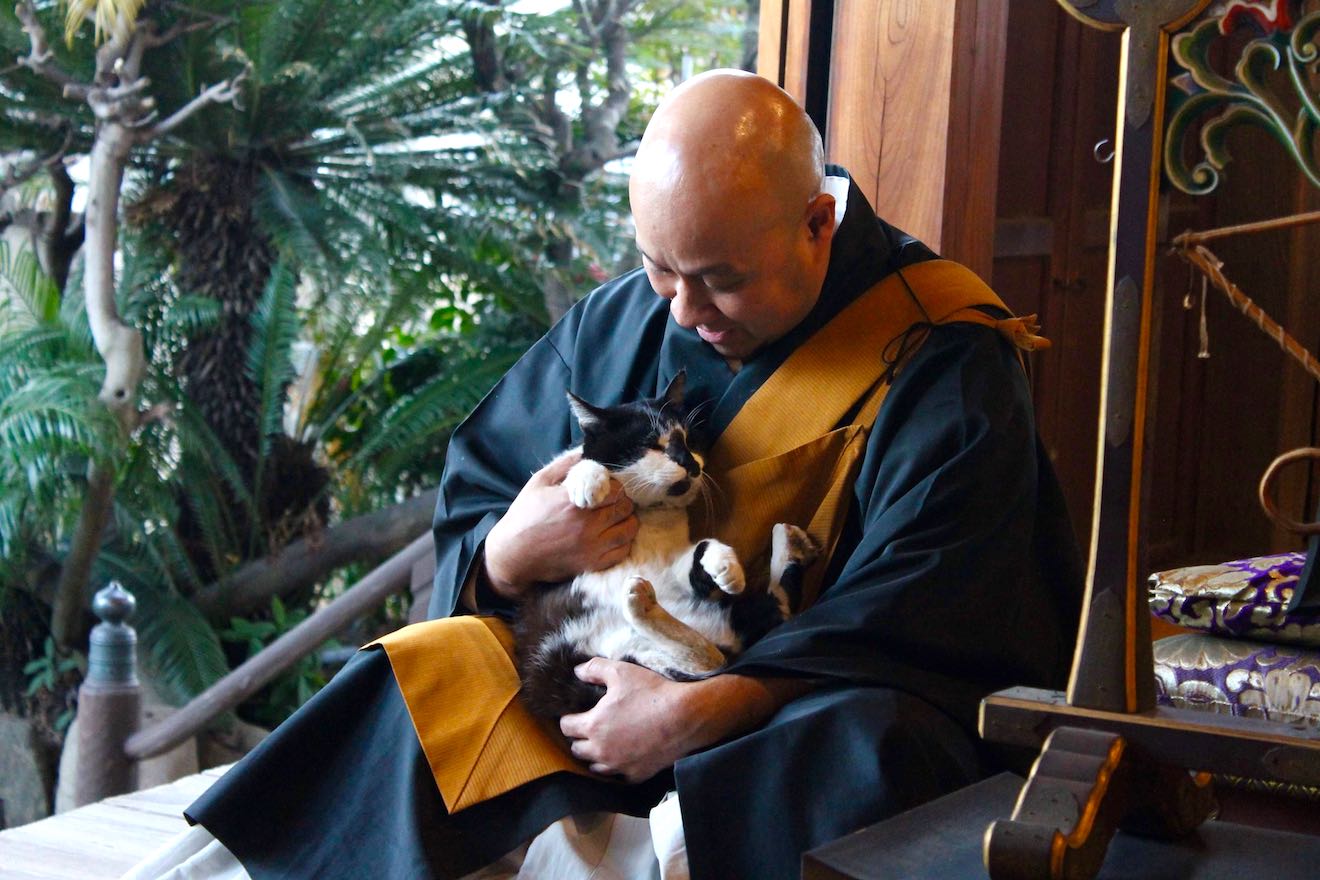 While I enjoyed kanjingyo, I found Suzuki-san to be as much of a draw to Kenshoji. After the meditation session, we chatted over freshly-brewed green tea and momiji manju, maple-leaf-shaped cakes that are filled with red bean paste and famous to Hiroshima Prefecture. Suzuki-san loves to crack jokes and despite the seriousness with which he approached the sutra recitation, our conversation afterwards was filled with hearty belly-laughs.

It turns out Suzuki-san is a good friend to make in town. A few days after my visit, I ran into him at a beachside café, enjoying a wood-fire oven pizza and a view of the Seto Inland Sea. Once again, his priestly garments were replaced with a tracksuit. Though he was off-duty, he immediately recognized me, jumped out of his chair to say hello and offered to drive me back into town after I’d finished my meal. I took him up on the offer.

When we left the café together, however, what I found was not one of Tomonoura’s common miniature mini-vans, used to navigate Tomonoura’s hazardously narrow streets, but a miniature monster truck, elevated several feet off the ground, with comically large tires. Suzuki-san looked at my expression and let out another belly-laugh. He jiggled the keys and gestured for me jump up onto the passenger seat.

Immediately I saw a dashboard of flip switches that read “FOR ROAD RACING ONLY” and a more than intimidating stick shift. I buckled my seatbelt. Just when I thought Suzuki-san had defied all the stodgy stereotypes of a Buddhist priest, he rolled down the windows, turned on the sound system, and blasted a Jay-Z song from the Bad Boyz II soundtrack. Both of us cackled our way through town as Suzuki-san torn up the up the Tomonoura backroads and then flexed his way through the cobblestone streets of the historic district. 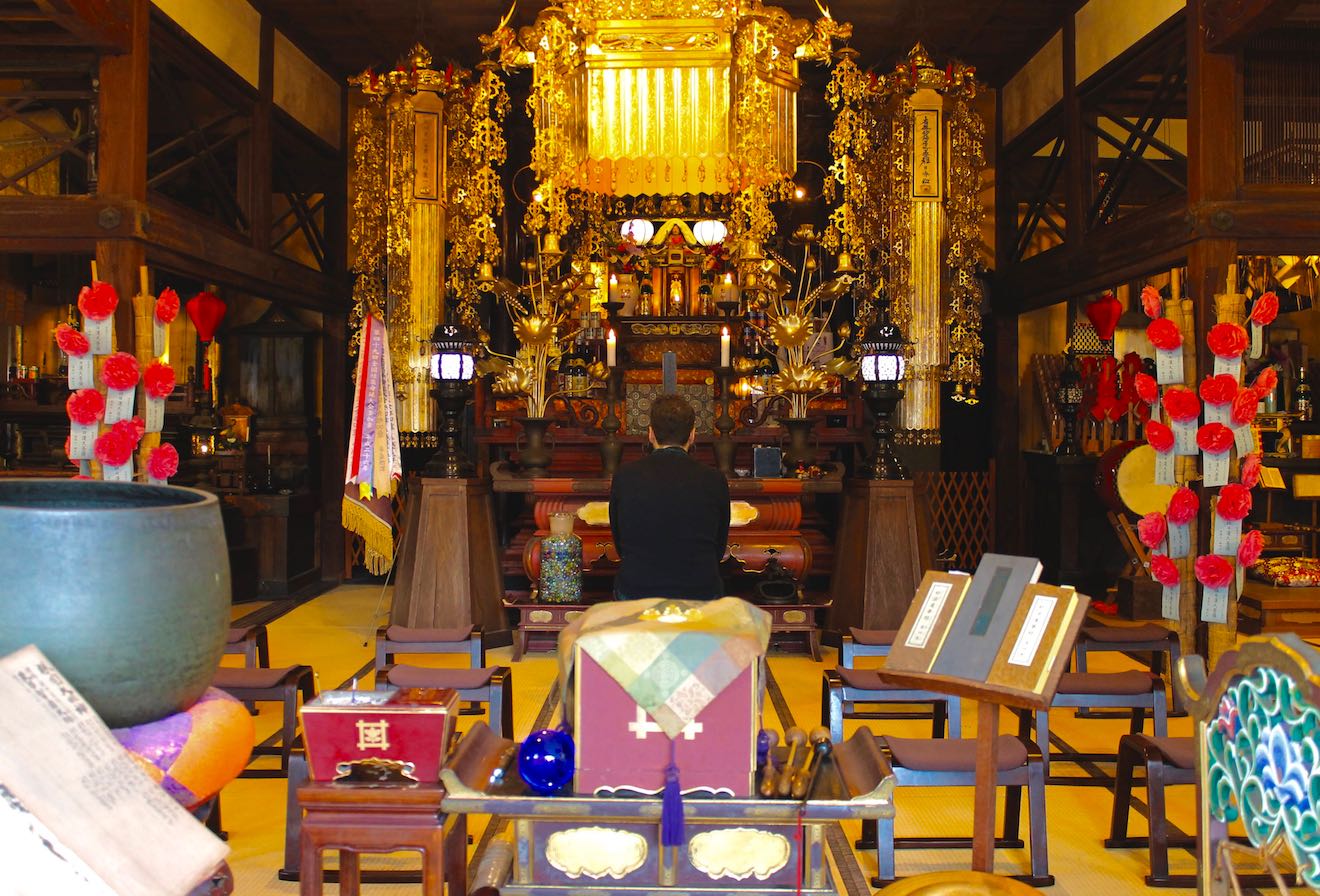 It turns out my visit to Kenshoji brought equal parts relaxation and asceticism, as well as excitement and worldly indulgence. One of my favorite memories from Tomonoura, I recommend Kenshoji both for the spiritual kanjingyo meditation and for the company of its charismatic priest.