Sensuijima Island floats in another world, just outside of the scenic port of Tomonoura. Legend dictates that its name is derived from the fact the island is so full of natural beauty, even the fairies became intoxicated by it.

Tomonoura represents the scenic landscape contained in Seto Inland National Park, designated as the first national park in Japan.  Within this national park are a multitude of various sized islands such as Sensuijima, Bentenjima, Tamatsushima and Tsugarujima. Early Korean envoys who had visited “Fukuzen-ji Temple Taichoro” were so moved by the scenery they called it “Nitto Daiichi Keisho (the most beautiful scenic spot between Tsushima and Edo)”.

Sensuijima island is full of unspoiled nature including mysterious rock formations created by volcanic activity where you can feel the energy of nature, and enjoy the many spectacular views of this area. 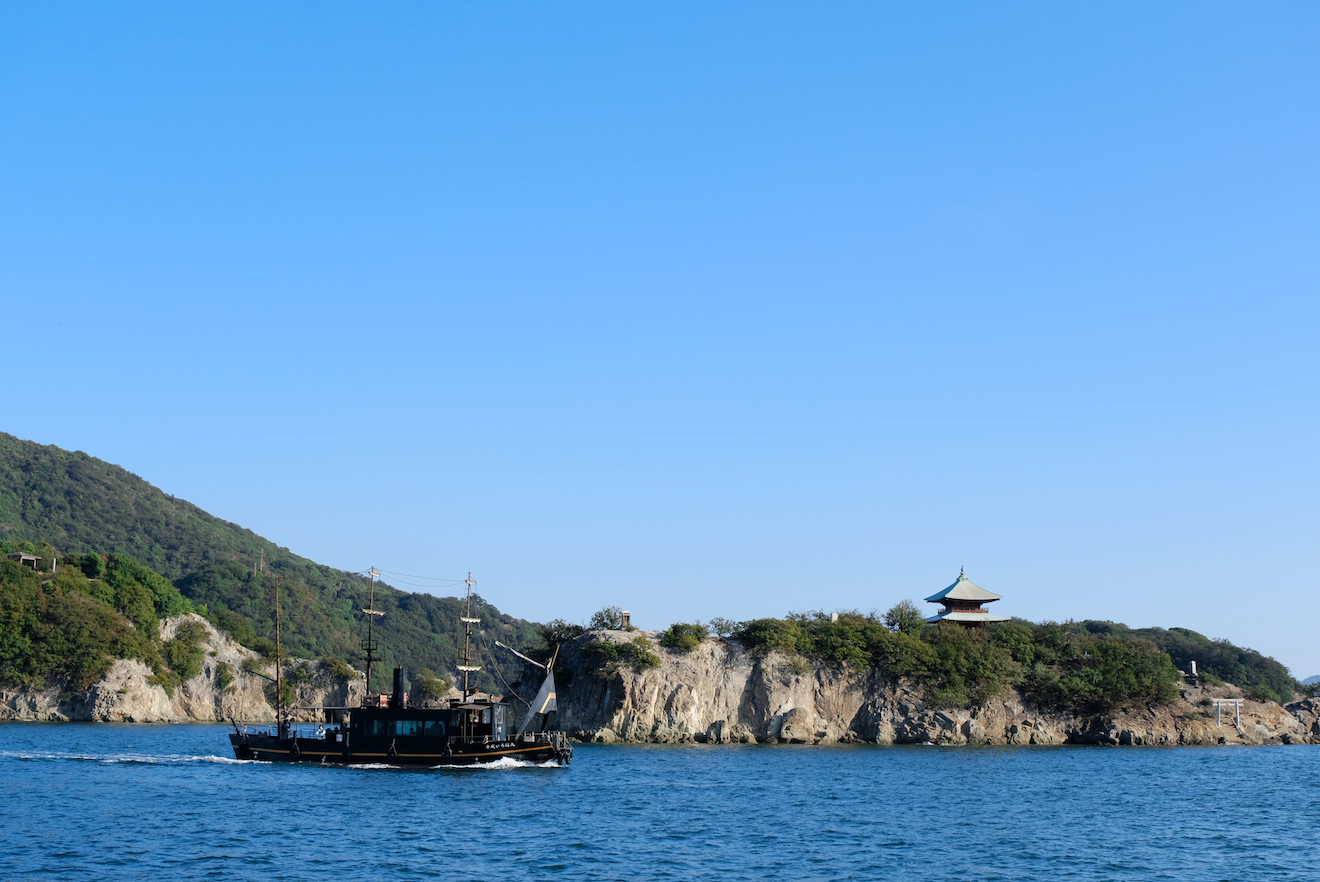 Take a five-minute ride on the municipal boat “Heisei Iroha Maru” and you will arrive at Sensuijima Island.
Though it is a small island, you can enjoy trekking around Omisen, as well as a variety of other trails. There are a number of observation points available on the hill such as Mt.Gozen, Senjin-ga-oka, Akaiwa, and Karasu-no-kuchi.
The Mt.Gozen Observatory near the port offers panoramic views of Tomonoura’s townscape, which are stunning.

The farther you go towards the far side of the island, the denser the forest becomes and soon you might even forget that you are surrounded by the sea.Your only reminder will be the occasional glimpse of the sparkling blue sea beyond the trees.

Sensuijima Island is said to have been formed by massive volcanic activity tens of millions of years ago. A promenade road traces the coastline from the west end of the island to the south, and you can enjoy walking silently, while hearing only the sounds of the ocean waves breaking on the shore. As you walk along the promenade, you will see the quay where the rocks are layered in five different colors. It is said that this five-color stratum, called “Goshiki-iwa”, only exists here. You can also discover 200 large and small sea caves on the island. 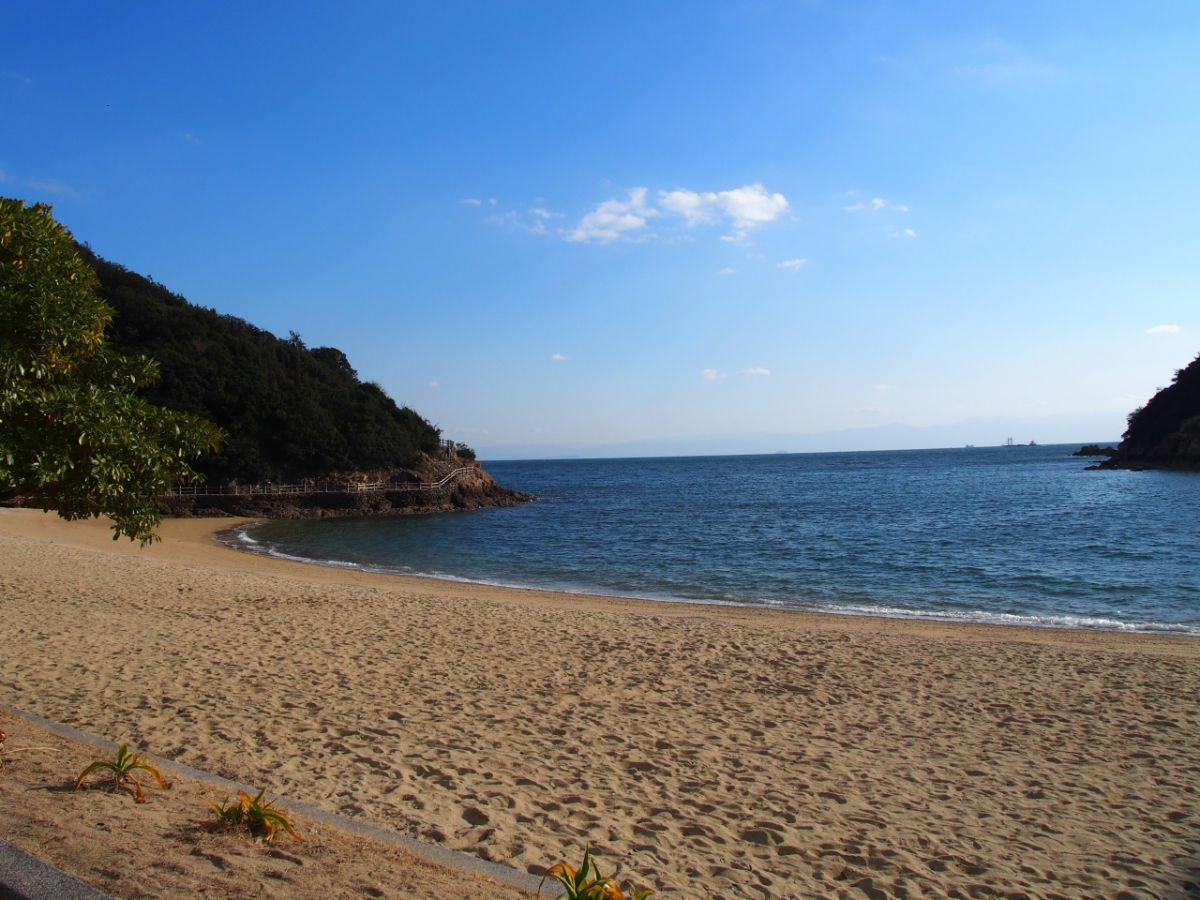 A variety of unique activities to enjoy

Sensuijima Island is an uninhabited island of unspoiled nature, but there are hotels, guest houses and campsites on the island for those who wish to spend more than a day here. Relax with activities such as swimming, barbecuing, taking a cruise or a tour to view fireflies. At the popular local beach spot “Tomonoura Beach”, you can enjoy summer activities using its convenient facilities such as a shower and changing room, and rental equipment such a sun parasol. You can also enjoy a meal at the restaurant in “Kokumin-shukusha Sensuijima”. 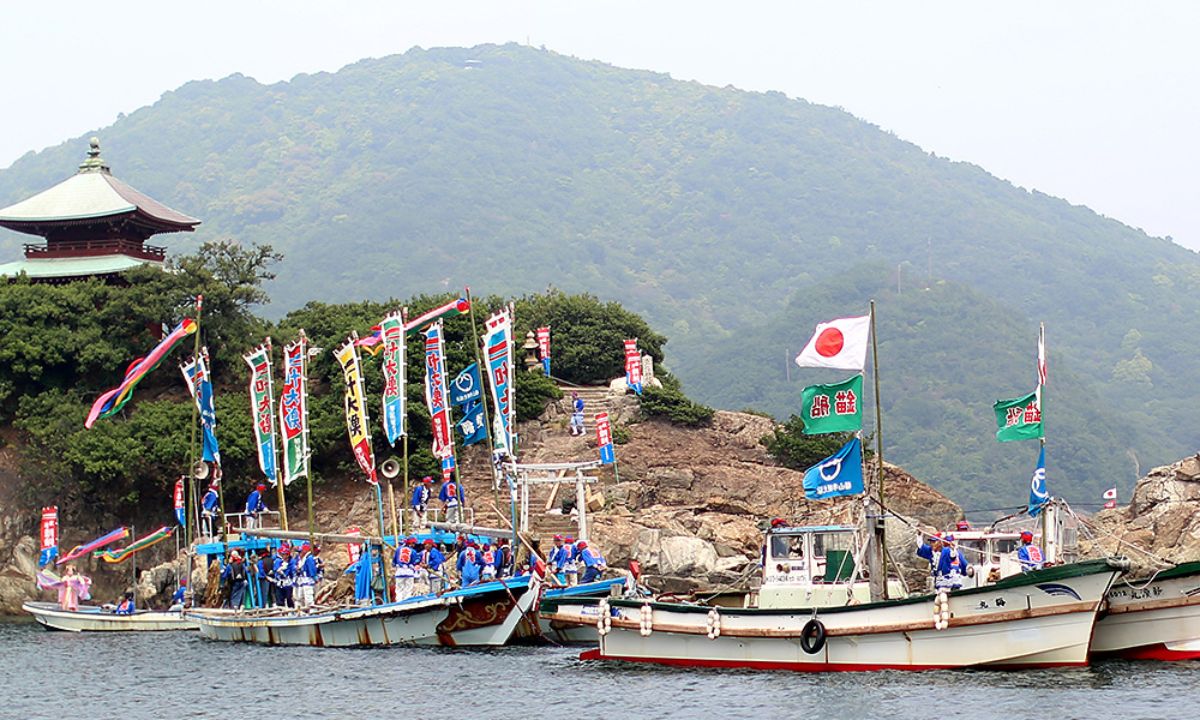 The can’t miss event of Tomonoura takes place in early summer. “Tai (sea bream) Netfishing” takes place on Sensuijima Island. It reproduces the traditional fishing method for catching sea bream which originated in Tomonoura during the early Edo period. A team of 50 members board 6 colorful boats and catch schools of seabream in nets during the exciting and charming event. Visitors can observe this event known as “Tai Ami” closely from the boat, and later purchase the freshest sea beam just after the event. 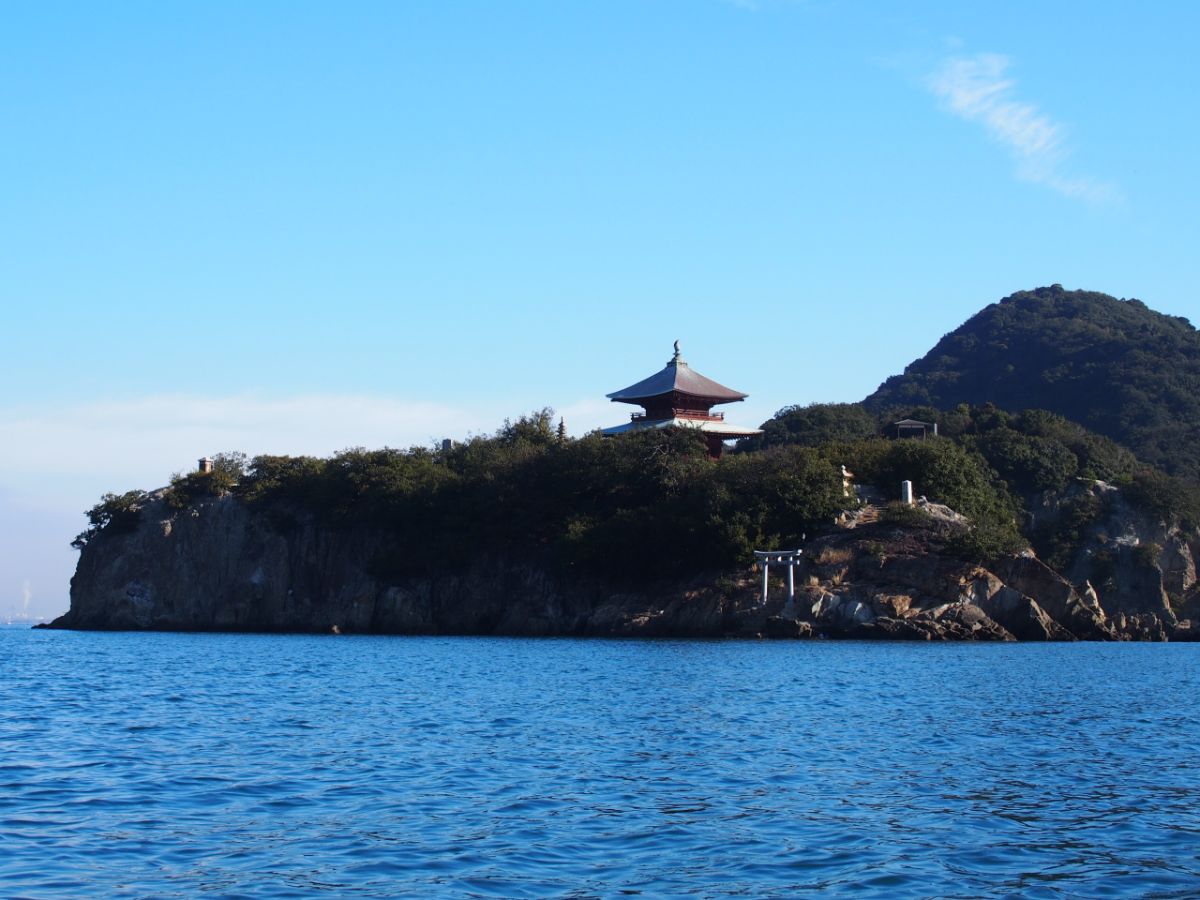 Bentenjima Island is known locally as Benten-san, in reference to its vermilion painted Benzaido Buddhist hall. There is a legend that has been handed down since ancient times about this island, which is officially named “Hyakkan Island” which goes like this.

During the Kamakura Period, Omi‘s warlord Masamichi Fujiwara who visited Sensuijima Island, dropped his family sword into the sea on his way to Sensuijima Island. He asked locals to retrieve the sword from the bottom of sea in exchange for a monetary reward, but no one accepted because this area was inhabited by dangerous sharks. A young man stood up for Tomonoura’s honor when he proclaimed, “I heard this was a renowned village, but yet there is no one to help!” Then he dived into the sea and returned with the sword, but the young man had been bitten on the leg and lost his life. Masamichi regretted his request, and in order to honor this young man, he ordered  an 11 story tower built with a hundred coins.

Although it is only a legend, the spirit of the brave young man seems to live on among the locals.