Follow a narrow road in which only one car can barely squeeze through and journey past “the two-eyed signal” (a stoplight with only red and green lights). There you will see the Torii gate entrance to Yodohime shrine.
It is here that the deity of Yodo-Hime is enshrined and has been serving as a deity to protect the people living in the Hira district of Tomo since ancient times. Yodo-Hime is the sister of Jingu Kogo, who had a deep connection to Tomo.

Since the shrine is located on a hillside called Myojin-san, it offers breathtaking views of the port and the cape, which were said to have been praised by Rai Sanyo (1780-1832), a historian in the Edo Period. If you witness the view of the Seto Inland Sea from this point, you too will feel the presence of the guardian deity of Tomo bay.

The annual festival of Yodohime Shrine, the Togyo and Kangyo Festival, is held on the first Saturday and Sunday in August. This festival is also called “Dango (dumpling) Festival.” This is because families in Hira region, where the shrine is located, used to make dumplings on the day before the festival and give them out to relatives or friends in the past. The date of the festival is actually the same as the Star Festival on the lunar calendar, so decorations and lanterns displayed in the town make the atmosphere lively and gorgeous.

On the festival day, the inhabitants in Hira-cho (currently around area from Hira 1 cho-me to 3 cho-me) divide into 3 teams, named “Kawara-ya,” “Naka,” and “Tanohira.” Each team usually holds 3 Mikoshi (portable shrine) floats (though currently there are only 2) per team and has a parade with a Taiko and flute (Mikoshi Bayashi) rhythm. They roll the Mikoshi float up to the precinct or square and each young team will then compete and end up fighting by “throwing” the Mikoshi. As such, that locals name this festival “Hira no Nage Mikoshi (throwing Mikoshi in Hira district)”.
Visitors will be amazed to see the Mikoshi being rolled around to a dynamic drum beat, as well as men in Happi (traditional Japanese
festival coats) at the festival. It makes for a fun and unique event in the middle of summer in Tomonoura. 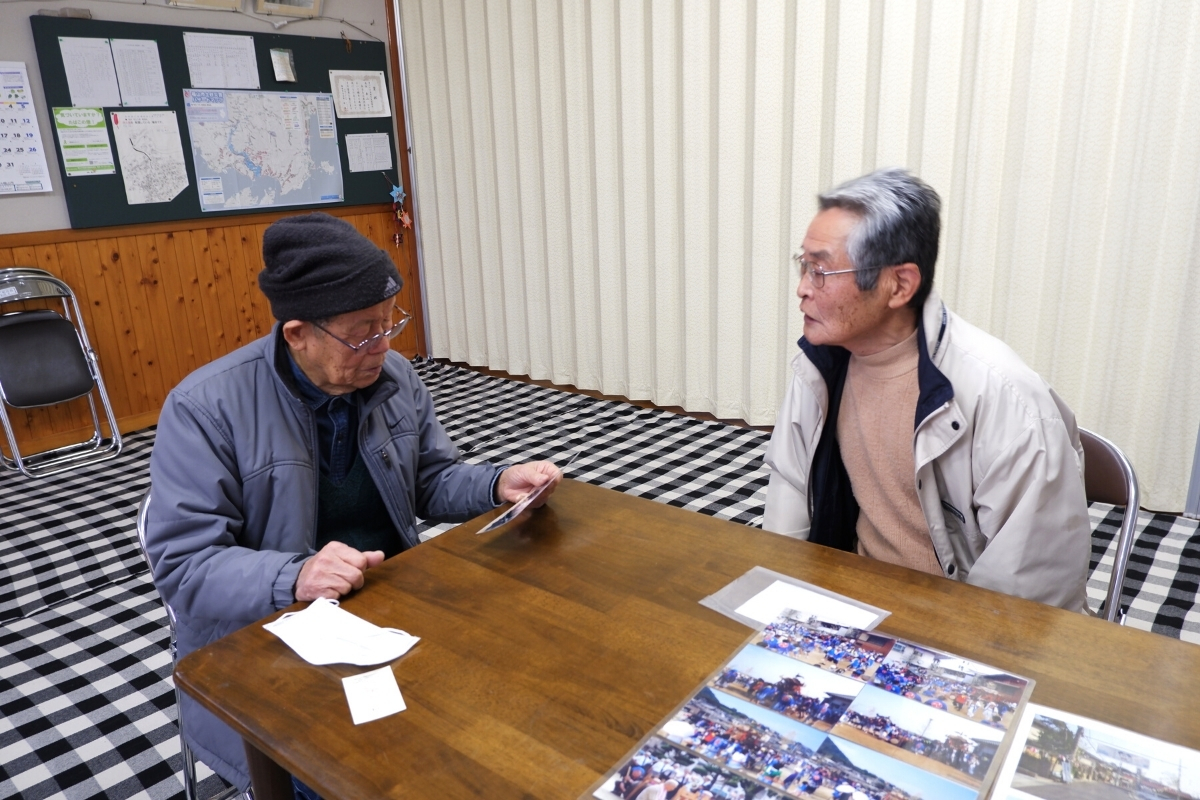 Speaking of summer in Hira District, this is the festival of Yodohime Shrine.

“Regarding festivals in Tomonoura, the Otebi Ritual and Oo matsuri are well known. However, this Hira District has a distinct and unique festival culture.

We make the dango by flattening a rounded mochi (rice cake), denting it slightly in the middle, and then putting some sweet beans paste there… We rarely make this kind of dumpling now, but women of each family used to make them and treat guests or friends from outside of the town with these sweets. As you noticed, this dango is very simple, just a combination of sweet bean paste and rice cake. But this was really delicious because we did not have many sweet treats in the past, which is totally different from now. I think that there might be another reason of the origin of nickname. People living outside of our district might have started calling it ‘Dango Festival’ because we entertain people with dango on the festival in Hira.

However, we people in Hira District don’t call the festival ‘Dango Festival’ very much. Perhaps you think that the name doesn’t sound cool, right? Ha-ha.”

Bearers were full of scars and bruises after the festival! Men take pride in their strength by carrying a Mikoshi which weighs over 100kg.

“Actually, this festival is called by various names, and sometimes it is called ‘Hira no Nage Mikoshi (throwing away portable shrines in Hira district).’ Hira District is divided into 3 areas, 1cho-me, 2 cho-me, and 3 cho-me, but they used to be 3 teams, ‘Kawara-ya,’ ‘Naka,’ and ‘Tanohira.’

In the past, there was a Mikoshi for each area. Bearers carried it and paraded through the town, then they ran around on the shrine grounds or some open spaces. Bearers competed with each other and the Mikoshi hit each other, while bearers shouted: ‘this one goes first,’ or ‘we won’t let them pass!’ Sometimes the Mikoshi happened to be toppled over or almost laid down. You would have been overwhelmed by the power and spectacle of this event!

This competition appeared as if the bearers were throwing the Mikoshi, and before we knew it, people started to call this festival ‘Hira no Nage Mikoshi.’ Mikoshi became ragged from being beaten-up, so we used Mikoshi with reinforcements such as so many clamps so that there was no space to put more clamps.
The cue to end the festival was when the Mikoshi hit the stand while the bearers shouted ‘Oshimai (that’s all) shan-shan!’ Then the Mikoshi were damaged even more by this. Maybe this sort of action once broke the floor of a front shrine.

As you can see the photos taken in 1950’s, there were more than 100 boats anchored in the port of Hira. That means, this region was a fishermen’s town with a number of ships. Fishermen, who were mostly young and with quick temper became bearers of Mikoshi…which was one reason the festival turned out to be just as I have explained.
They naturally had spirit of rivalry, such that ‘we can’t lose to other teams!’ mattered more than the pride of their own strength. Especially in their own town, they were over-eager to carry Mikoshi as long as possible, and troubles occurred. They behaved wildly while carrying a Mikoshi whose weight was more than 100kg, so their shoulders were chafed, and their entire bodies were full of scars and bruises.

They considered all the scars and bruises after the festival to be honors, and it would not have been a festival if they didn’t fight each other. But the good thing was, people in Hira didn’t hold a grudge after the festival. All of them were straightforward and frank, so they reconciled with each other soon.

The festival is held at the same time as the Star Festival. Therefore, it has been a custom since long time ago that children make decorations and display them. Children write their wishes on tanzaku (strips of paper) and tie them on bamboo grass, and each family displays that decoration beside the front door.

In the past, children looked forward to throwing the bamboo grass decoration into the sea from a breakwater in the morning of the third day, after the festival. The nice thing of the festival is that people of all ages can really enjoy it from the bottom of the heart while forgetting their everyday life.”

We would like to protect and cherish to inherit the customs which distinguish the Hira region.

“The number of residents of the Hira region is decreasing, and is becoming pretty difficult for us to hold the festival as we used to. But each area has 2 people who are in charge of Shinto ritual, and take turns being the representative of the festival.

And we are proud of that all 3 areas are well-organized even though they compete with each other when carrying Mikoshi. People make bamboo grass decorations and lanterns for about 2 months before the festival. Not only children, but also elderly people, who gather at assembly hall and cooperate together. We feel everyday life is worth living when we think of the festival. The preparation is a hard task and takes time, but everybody cooperates and supports each other, and gets together for the festival. This is very great.

Today, we don’t have Mikoshi for each area. One main Mikoshi and a decoration Mikoshi for a whole Hira Region. Instead, we have 3 children’s Mikoshi in total, one for each area. After the prayer ceremony at Yodohime Shrine in the afternoon of the first day, the bearers parade with Mikoshi from 1 cho-me to 3 cho-me. On the second day, the parade goes the opposite way, from 3 cho-me to 1 cho-me.

People from the 3 areas cooperate together and carry a Mikoshi, but today’s bearers feel the same way as the past, they want to spend time in their own town as long as they can. At the finale, they spend a lot of time avoiding the climb up the stone stairs of the shrine because the festival is over when the Mikoshi arrives at the shrine grounds. Some staff call out and say, ‘Let’s finish now,’ but bearers continue to carry the Mikoshi and liven up. It is obvious that they are reluctant to reach the shrine grounds. It’s a wonder for us that these feelings and thoughts have not changed since the past, even as time has changed, and the bearers have changed. Everybody just doesn’t want to end the festival too soon. It was same for me as a bearer, thinking ‘I wish this enjoyable time would last forever.’

Children would think ‘we will carry Mikoshi in the future’ if the festival has been around for them since they were born, so we want to continue to pass down the festival for good.

Maybe Tomo can be considered as one town, but Hira region still has its own unique customs such as this festival of Yodohime Shrine. Also there are a lot of songs for Bon-odori (Bon festival dance) inherited by this area. We treasure Hira’s culture and customs and will hand them down to our children and posterity.” 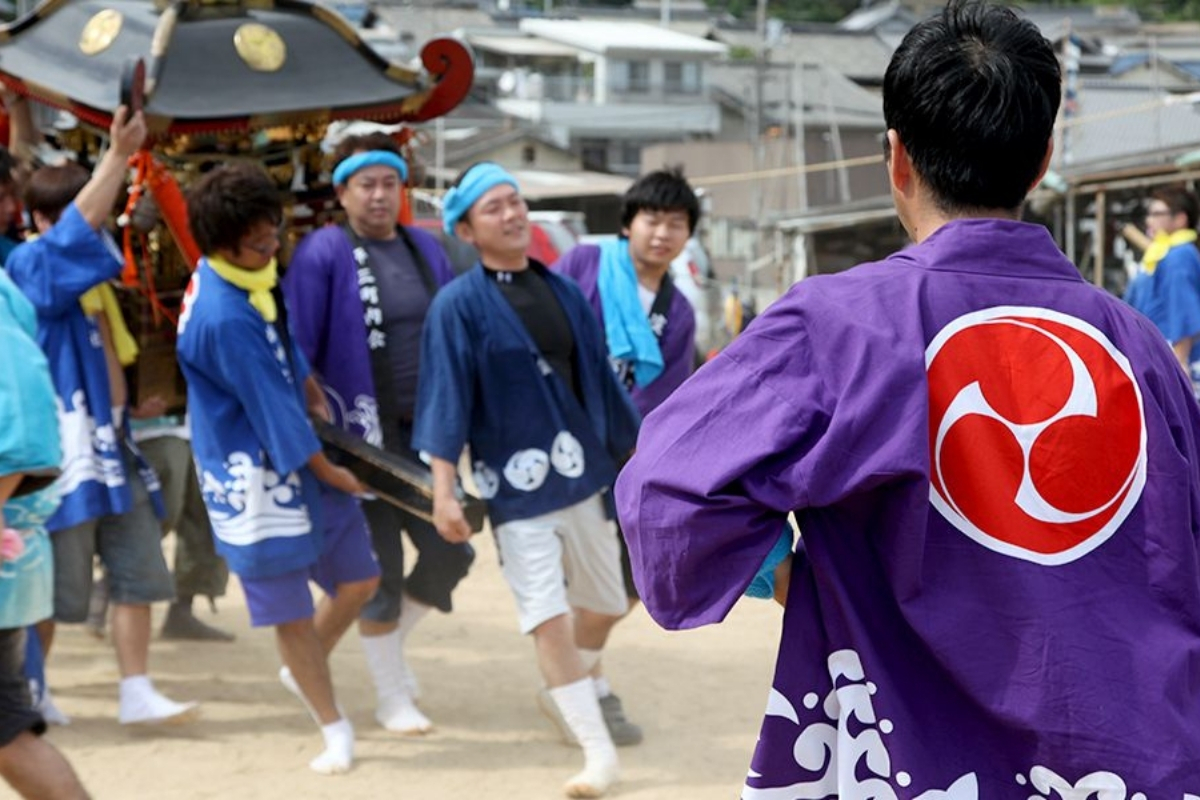 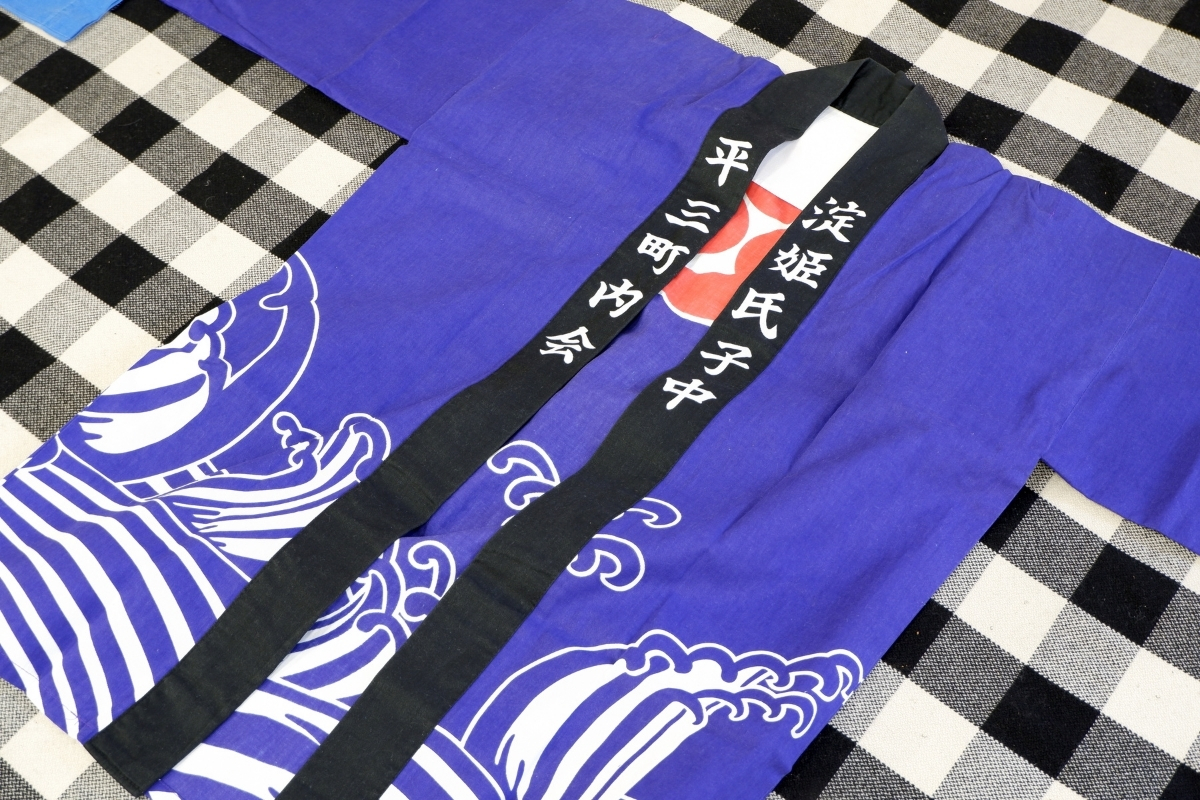 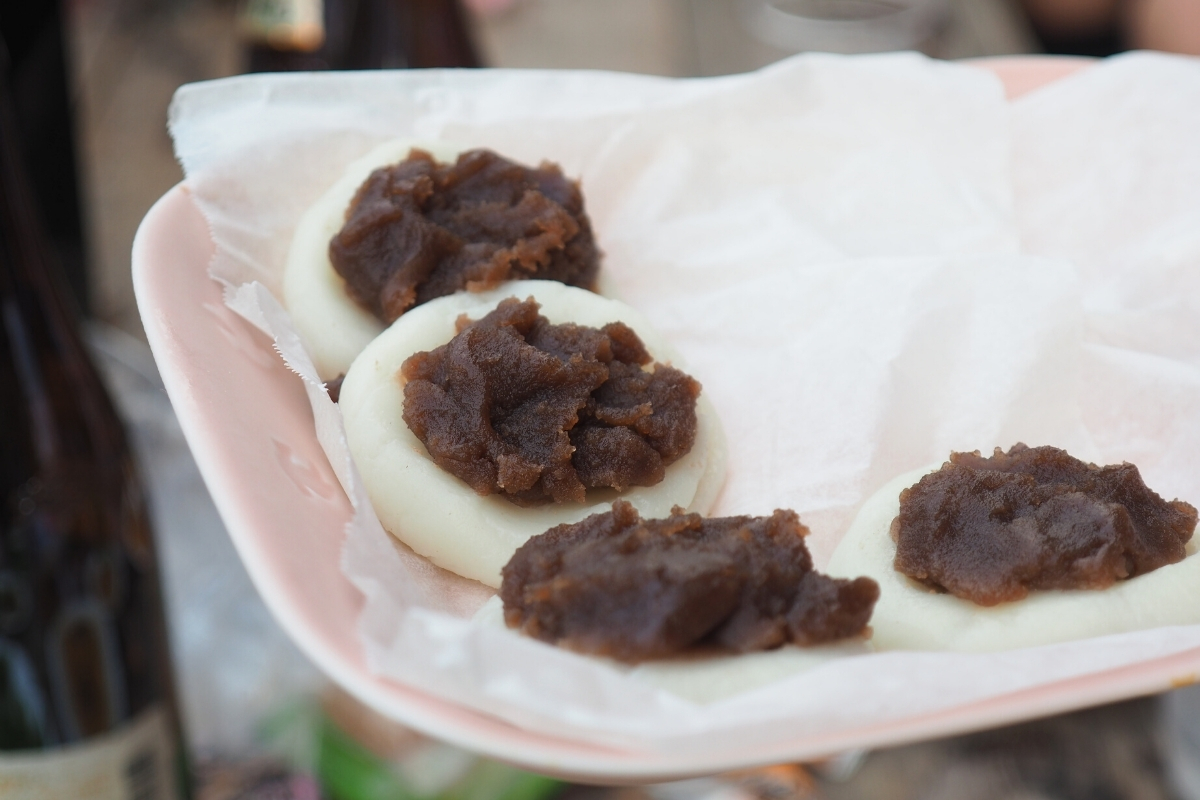 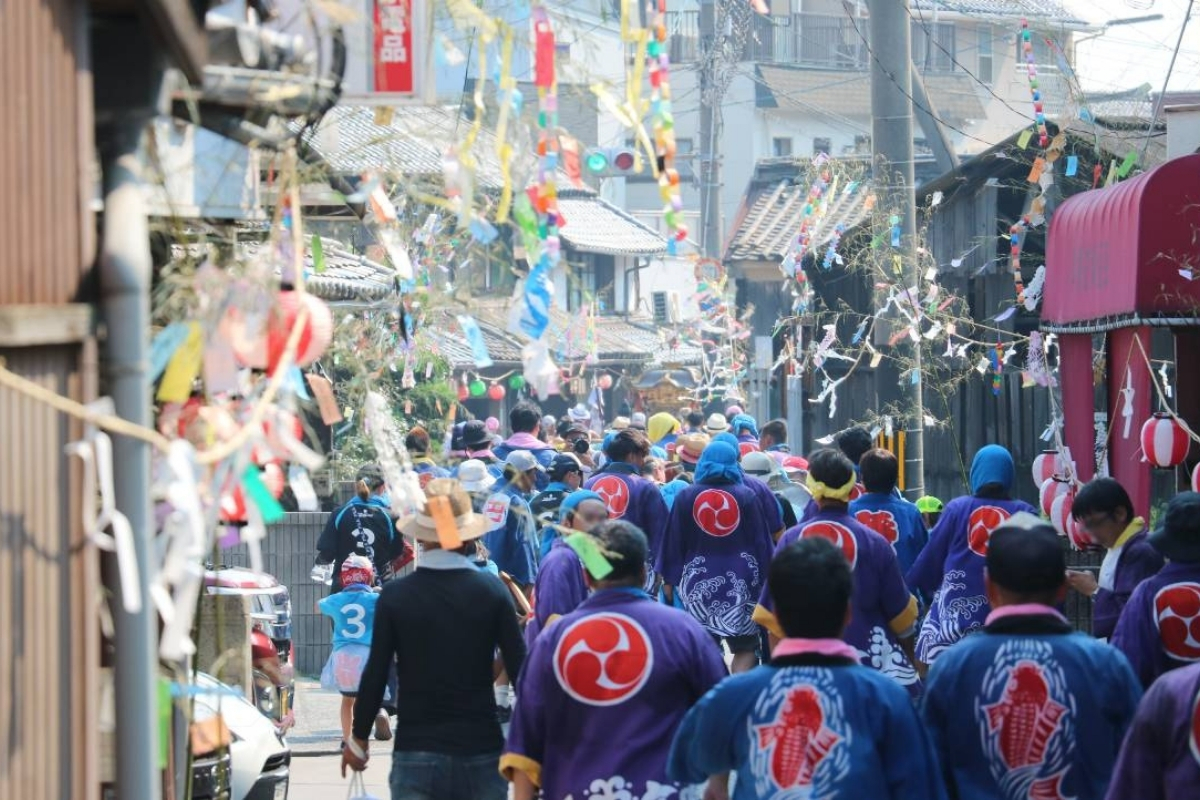