“Otebi Ritual” – Wish for good health and ward off evil with a big burning torch!

Tomonoura’s Otebi Festival is held in the evening before the second Sunday in July, where the town of Tomonoura is transformed into a sea of fiery reds.

The Otebi Shrine Ritual is a purified ritual that takes place on June 4th in the old calendar before the Mikoshi Togyo of Susano no Mikoto, the deity of Gion Palace, which is the current Nunakuma Shrine. Festival goers frequent every year to pray for good health and to ward off evil.

An Otebi is a kind of fire torch that’s typically 4.5 meters long and more than 200 kg in weight, made with the timbers of pine trees and the wood of sacred trees called Muronoki, and tied together with green bamboo. The Otebi is lit with a divine fire made using the sparks from a flint stone, and a group of Ujiko, parishioners carry it up the large stone steps. This red-hot festival will take you back to the sacred origins of fire.
When the Otebi is delivered to the front of the shrine, the great fire festival begins and continues on until midnight.

Locals light smaller torches from the three main fires in the area, and take them to purify their homes. On the night of the Otebi Ritual, you can see small fire torches burning around the town, as though the stars have fallen from the sky.
If you were to view the scene from the sky, it would seem as though the summer fireflies were putting on a spectacular display. 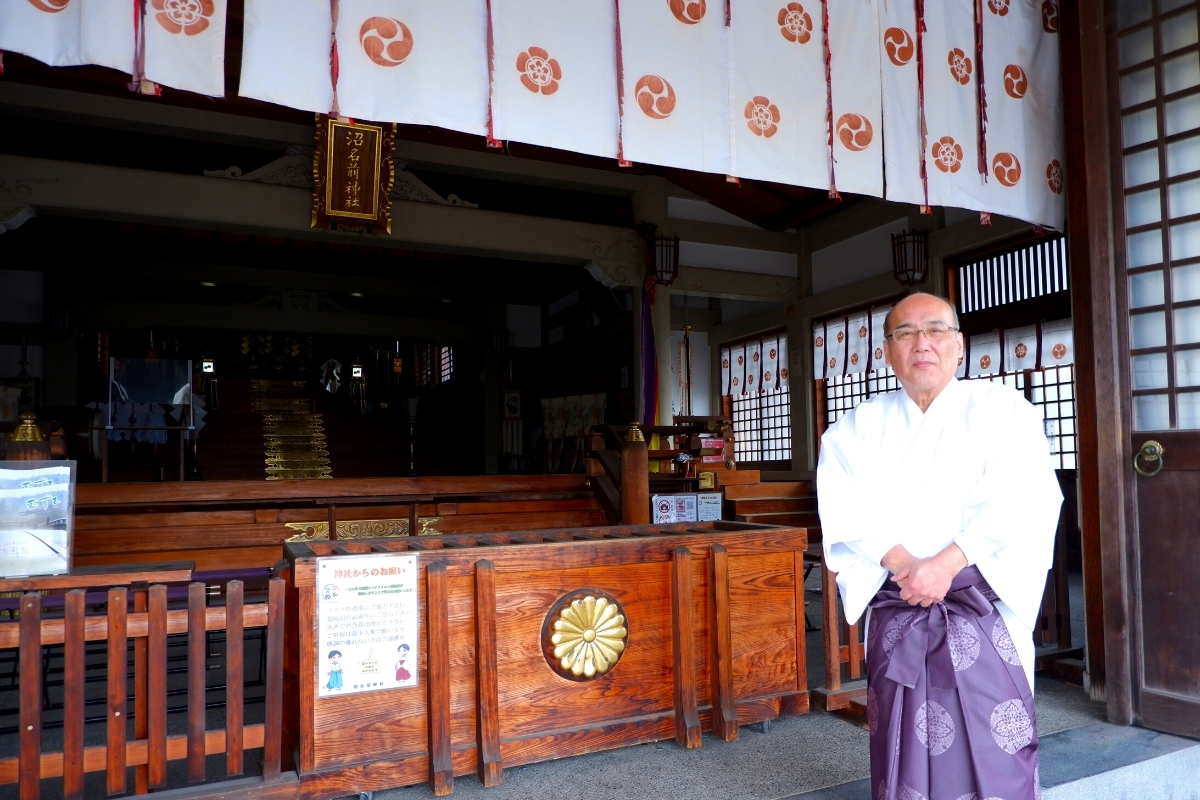 “The ‘Otebi Ritual’ is one of the three biggest fire festivals in Japan. This was originally the summer festival of Tomo Gion-gu (present Nunakuma Shrine), the purification ceremony held before the Mikoshi Togyo (the passage of portable shrines) of the enshrined deity, Susanoo no Mikoto. The origin is actually not clear, but we can presume that Mikoshi Togyo was taking place in the Kamakura period (1192-1333) according to some ridge plaques of portable shrine.

The Otebi Ritual is held the day before the second Sunday of July. The bearers of the Otebi, who wear white clothing, cleanse themselves with sea water. At 6 pm, the first drum is beaten by local elementary students for 30 minutes to announce the start of the festival. The second drum sounds at 7 pm, and the third drum at 8 pm is the final call for the beginning of the ceremony. After the offering of octopuses and cucumbers to the deity and the recital of a Shinto prayer, the sacred fire is lit on theShinzen tebi (a torch of 1.8 meters long and about 30 kg in weight).

There is a reason for offering octopuses and cucumbers (originally, shimauri). It is said that the shape of cross-section of cucumber looks like a crest of the shrine. There are some customs in various places where cutting cucumbers is generally taboo or people involved in Shinto rituals, as well as parishioners, don’t eat cucumbers during the festival period. However, the parishioners of Nunakuma Shrine do eat cucumbers and octopuses before the Shinto ceremony here. It is guessed that the reason for eating them is to gratefully accept the power of the deity, and to better absorb its power due to the clinging ability of octopuses.

Maybe most people see this Otebi Ritual from the point where the 14 bearers in white clothing climb down the stone stairs while carrying the Shinzen tebi. After that, the bearers light the Otebi, 3 huge torches of about 4.5 meters long and more than 200 kg in weight which have been placed to the south of the shrine gate, after which they climb back up the stairs. Then parishioners from the towns which are on duty for the festival carry the 3 burning torches in groups known as the front body, the middle body, and the rear body to the shrine grounds.

When the front body places the torch in front of the worship hall, a portable shrine is put in the hall from the storehouse. The same process is carried out for the middle body and the rear body (so, there are 3 portable shrines as well as 3 Otebi). Subsequently, the Otebi are carried around the shrine grounds and to the towns to purify the area. This is the end of the Shinto ritual of Otebi. Visitors bring sacred fire back to their homes by lighting a Kotebi (small torch) to pray for the well-being of their families.”

We would like people to experience the profundity of the festival by knowing its meaning and roots.

“The ‘Otebi Ritual’ attracts people with its brilliance and courageousness. However, if you are interested in this festival, we would like you to know its meaning and roots as well. Of course, it is important for bearers and the audience to enjoy the festival itself. But this is not only a lively festival with burning big torches. Maybe your point of view or feeling would be changed if you knew that this is a ritual for purifying the roads for the deity before the passage of the portable shrines.
Festivals or Shinto rituals cannot be handed down only with a manual. We cannot carry Otebi and control the fire of it without long and highly-skilled experience. Moreover, it takes a very long time and a lot of work for both preparation and procedure.
For example, the timbers of resin-rich pine trees for making Otebi need to lie idle for 2 to 3 years. In May, the timbers are divided in pieces, wrapped up with green bamboo, and tied with ropes to make the Shinzen tebi, Otebi and Kotebi. In July, a scaffold needs to be set up for the place of enshrinement of the Otebi.
We have to hand this festival down to the next generations, by the work of our hands and the words of our mouths, with all the parishioners and people in our towns.”

Nunakuma Shrine is Tomonoura’s representative shrine, so locals call it “Gion-san” or “Gyon-san”.
In the Meiji Period, “Watasu Shrine” where Oowatatsumi no Mikoto, a deity of the sea, was enshrined was integrated with “Gion sha” where Susano no Mikoto, one of the three important deities, was enshrined. It soon became a place to pray for safety on the sea, good catch of fish, peace and prosperity in the household, good health or cure for disease, academic achievement, safe child birth, etc. This became known as Nunakuma Shrine.

Also at the shrine grounds, there is an assembled style Noh-style stage created by Hideyoshi Toyotomi. When Fushimi Castle was in Kyoto, this Noh stage was transferred from Hidetada Tokugawa to Katsunari Mizuno, an owner of Fukuyama Castle, then was donated to Tomonotsu Gion sha (the current Nunakuma Shrine) in the 1650s.

Initially it was quite compact and was easy to assemble, disassemble and move wherever you want. Now, however, it is permanently fixed and installed with the wooden shingle roofing, a dressing room, a room filled with mirrors, and a bridge hanging. In 1953, it was designated as an Important Cultural Property of Japan, and today, it is still used as a Noh stage.

There are various festivals held throughout the year at Nunakuma Shrine.
The “Shinto Bow Ritual” offers prayers for the peace and safety of the year in February, “Chinowa-kuguri (passing through a hoop made of kaya grass)” purifies impurities in June, “Otebi Shinto Ritual” involves climbing up stone stairs while carrying a huge fire torch in July, and the “Oo Matsuri (Autumn Festival)” is said to be the biggest festival in Tomonoura at Watasu Shrine. Many people come visit to see the festival from both inside and outside Tomonoura, and the town is bustling with activity. 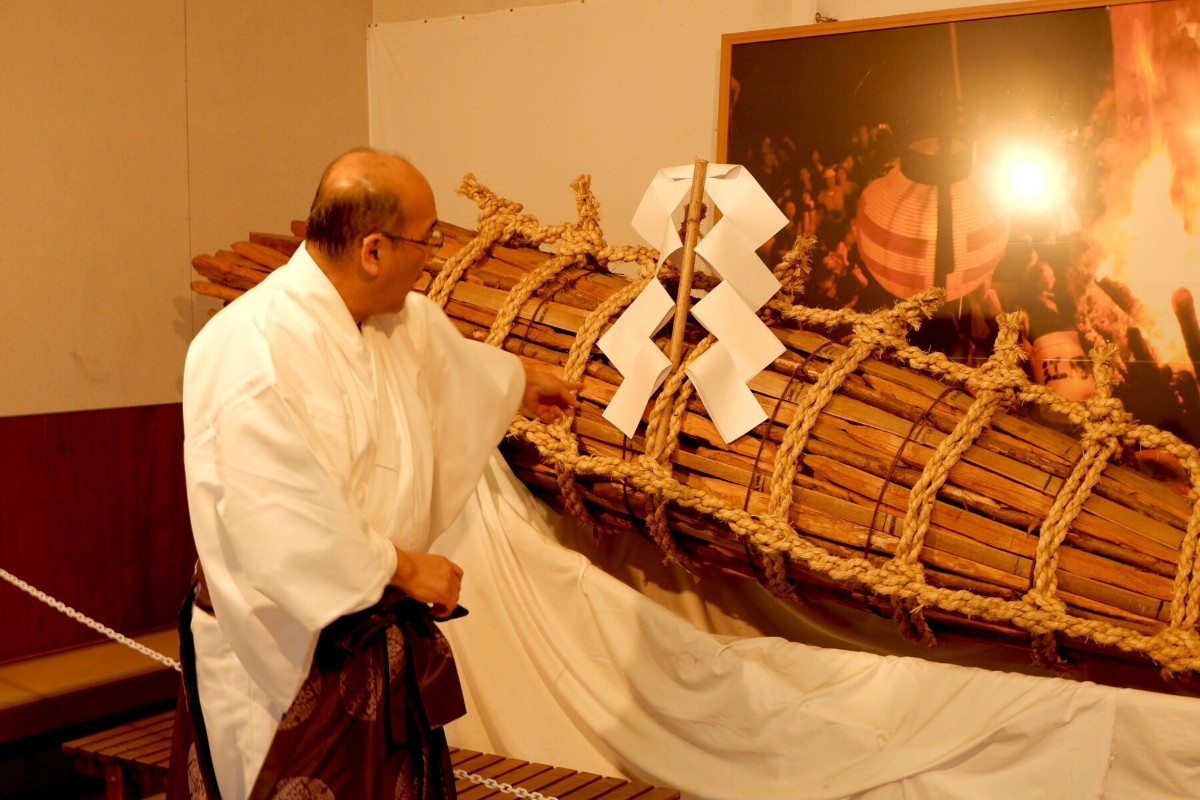 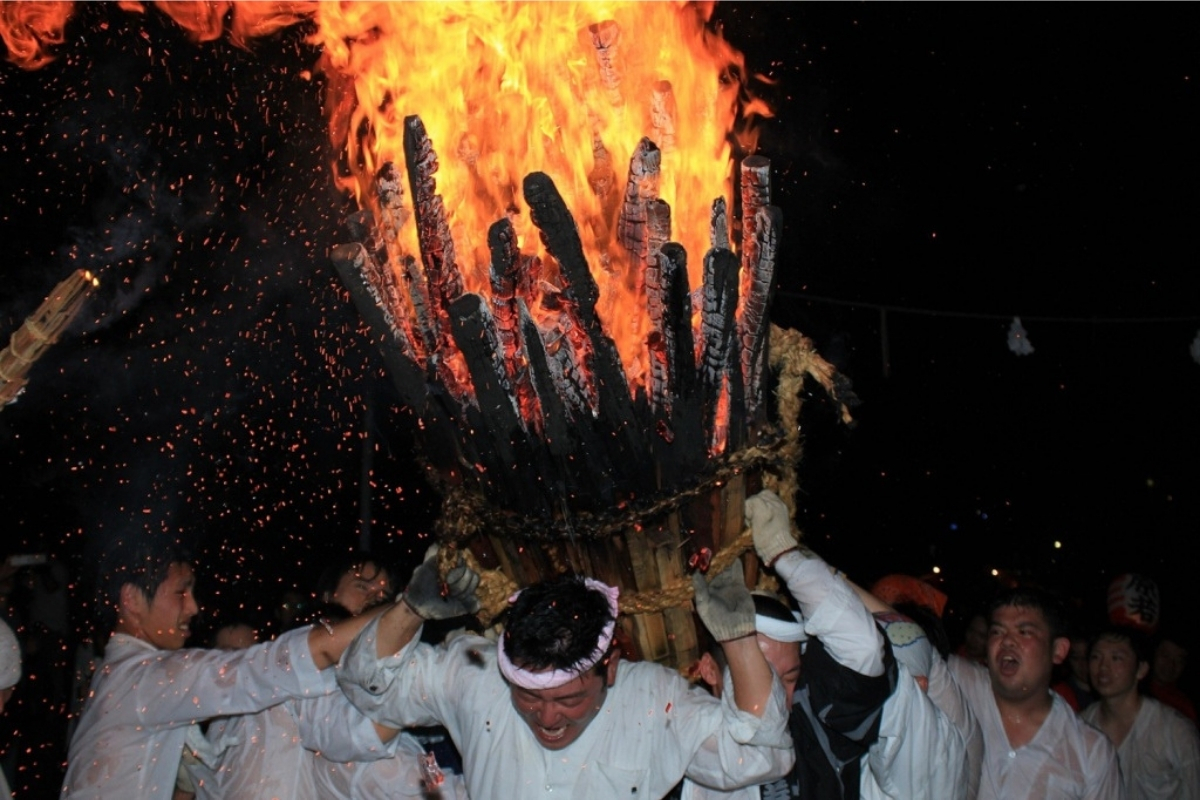 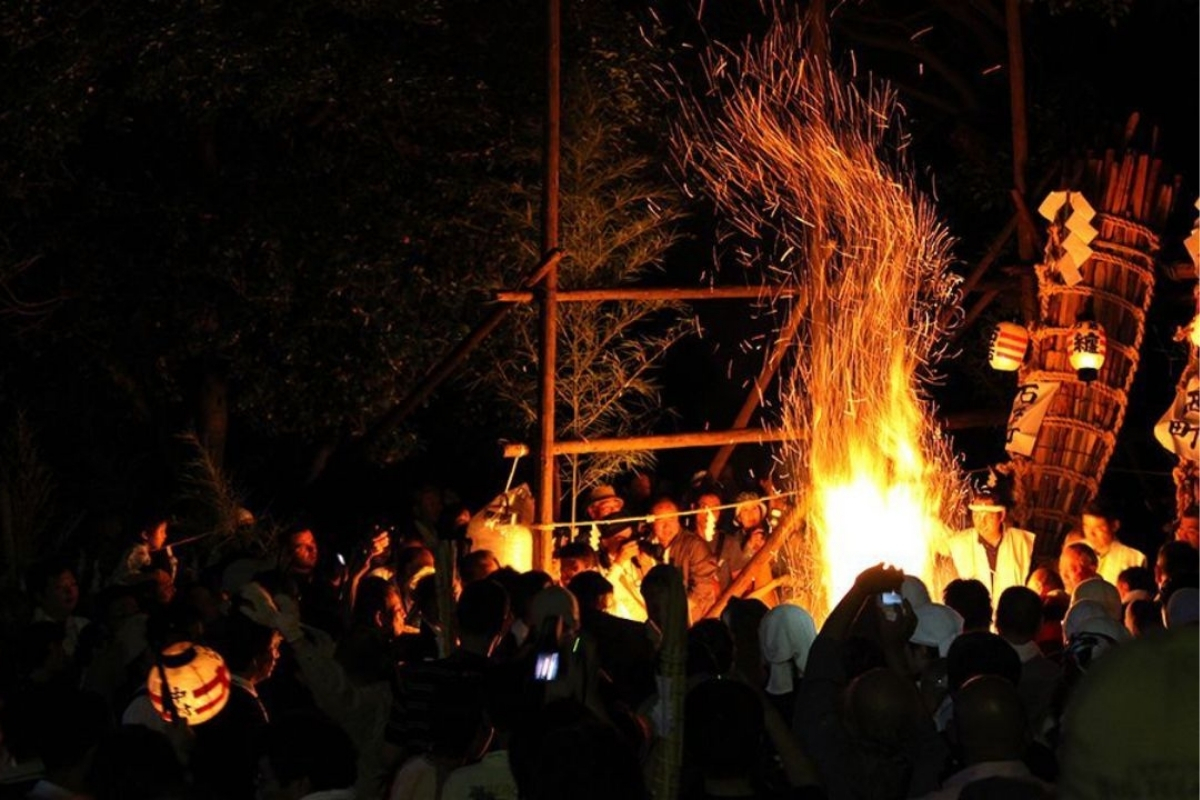 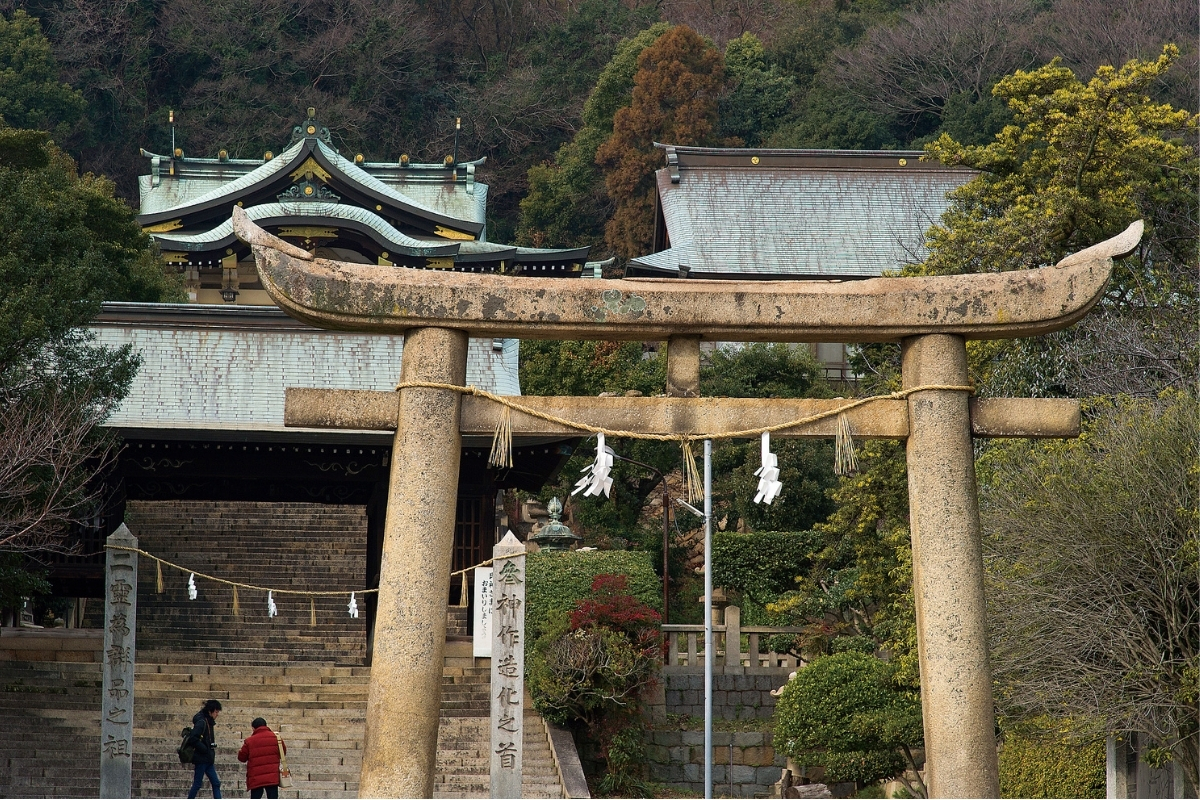