The beautiful musical accompaniments of “Nerota, Nerota”, the Suou (ceremonial dress of lower-class samurai) worn by the archer and the Eboshi (formal headwear for court nobles) all signify the beginning of the sacred bow ritual. The archer gazes at a target about 28 meters away and draws his bow.

It is a brave ritual that follows the figure of the archer in the cold winter air.

“Oyumi Ritual” is an annual event at “Hachiman Shrine”, which is on the grounds of “Nunakuma Shrine”, whereby the bow now symbolizes a prayer for peace in the New Year. It takes place on January 7th of the lunar calendar (now the second Sunday of February) and was designated as an Intangible Folk Cultural Property of Fukuyama City in 1971.

An arrow, which represents a prayer for the purification of all the bad things in the past year and which wishes for the peace of the coming year is released toward the target, upon which is written the words “No superiority or inferiority” in Japanese calligraphy.

The locals within the seven old towns in Tomonoura take turns being on duty for the festival. The eldest person among the young group on duty is chosen as the master owner of the bow, and the youngest is chosen as the child owner of the bow. In addition, there are two small pages from elementary school named Kosho, and two arrow collectors called Yatori who are pre-schoolers. It’s charming to see the tiny children carrying the big bronze ring on their backs.

Celebrating the Lunar New Year, this is the mid-winter event of Tomonoura that you mustn’t miss. 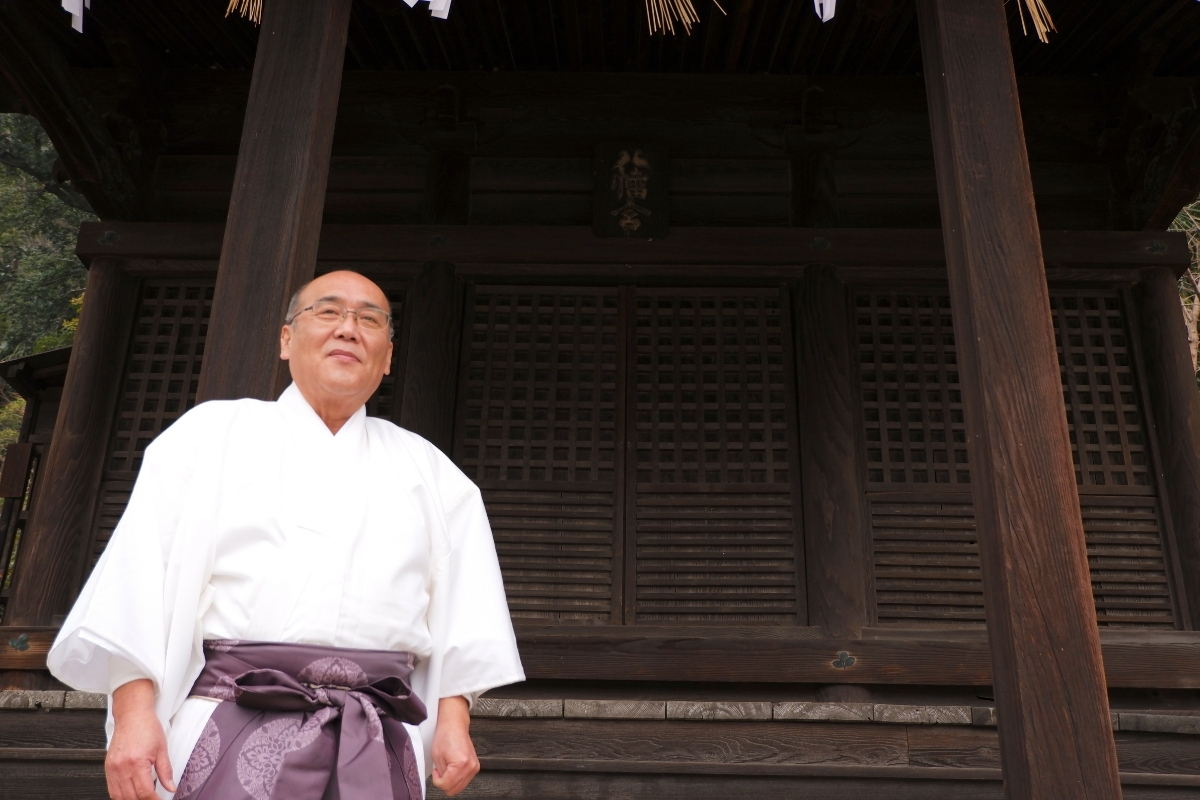 There is no superiority or inferiority of the bow which purifies an evil spirit.

“ ‘Hachiman Shrine’ is located on the grounds of ‘Nunakuma Shrine,’ which is the representative shrine of Tomonoura.
The origin of the ‘Oyumi Ritual’ started around the year 193 AD, when Empress Jingu visited Tomonoura and offered an ‘Izunotakatomo,’ a tool which is worn when an archer shoots a bow. The ritual has been changed and it is now a Shinto event to purify an evil spirit using a bow in the beginning of a new year, as well as a prayer for peace.

A ritual which is carried out solemnly for 2 days

“ ‘TheShinto Bow Ritual’ is held on the second Sunday in February, but the ritual starts on the day before. On Saturday evening, the assignment ceremony of the bow is carried out and the bows are handed over to this year’s appointees from the former staff members. After that, the investiture pilgrimage starts. The decorated bows, owners of the bows, Kosho, Yatori, a parishioner representative, parishioners, members of committee of the town of duty walk to the shrine while circling the town as saying ‘mosu, mosu.’ Asari clams are offered for the rite in the shrine, and the Kanpai-shiki (toasting ceremony) is carried out with chanting ‘Yonome, yonome.’ The owners of the bow go back to the town after receiving the title of ‘Jugoige (Junior Fifth Rank).’
‘Jugoige’ is a rank given to a person who rules a region for festivals. The upper ranks of this were treated as aristocracy, and provincial governors or military aristocrats including Emperor Kanmu were in this rank in ancient times.

And on Sunday, the members for the ritual who wear Suou and Eboshi again make a circuit of the town with chanting ‘mosu, mosu, oyumio mosu’ and then go to Hachiman Shrine. The Kanpai-shiki is held before the deity. At this time, black beans, chestnut, kelp, dried cuttlefish, and small dried sardines on a wood tray are provided, as if following the ritual for samurai going in to battle. After this entire ceremony before the deity ends, the Shinto ritual of the Bow is held with the shooting of 12 arrows in total. Most of the visitors think that all the rituals end with this, but it’s not over yet. The members of the Bow Ritual go back to the town and change into kamishimo, a ceremonial dress worn by samurai, and return to Hachiman Shrine while chanting ‘mosu, mosu, oreio mosu.’ Finishing all these rituals is a way of giving thanks for service and praying for a deity’s protection for the coming year.

The highlight for visitors could be seeing the owners of the bows shooting arrows on the grounds of the shrine, but I hope people see the whole series of events, starting with the investiture pilgrimage and all the way to the visit of thanks to the shrine.”

The ritual changes responding to the times while never losing the essence of it.

“Shinto rituals seem not to have changed over the ages, however, they have been changed bit by bit. I think that the important thing is the meaning or the thoughts which are handed down over a long time, such as the Bow Ritual not being about the competition of whether arrows can hit a target or not.

The ritual used to be held on January 7th in the past. At that time, the members were selected on the New Year’s Eve, and they were confined to the town’s assembly hall for a week to cleanse themselves by eating food called ‘Otoko Ryori (men’s cuisine)’ which is cooked only by men. This is a ritual called religious purification. Today, the manner of the ritual differs from town to town, but the religious purification is still carried out. Also, we still have a custom to eat asari clams provided at the Kanpai-shiki, and parishioners often eat clams dressed with vinegared miso (fermented soy bean paste).

We cannot say that the ritual will be always carried out as it is forever. We pass it to next generations without being wedded to the old way of the ritual convention, and it needs to be changed little by little to adjust to the times or circumstances. The most important thing is the roots. We must not lose the essence, and would like to preserve and pass down the culture and customs special to Tomo.”

Nunakuma Shrine is Tomonoura’s representative shrine, so locals call it “Gion-san” or “Gyon-san”.
In the Meiji Period, “Watasu Shrine” where Oowatatsumi no Mikoto, a deity of the sea, was enshrined was integrated with “Gion sha” where Susano no Mikoto, one of the three important deities, was enshrined. It soon became a place to pray for safety on the sea, good catch of fish, peace and prosperity in the household, good health or cure for disease, academic achievement, safe child birth, etc. This became known as Nunakuma Shrine.

Also at the shrine grounds, there is an assembled style Noh-style stage created by Hideyoshi Toyotomi. When Fushimi Castle was in Kyoto, this Noh stage was transferred from Hidetada Tokugawa to Katsunari Mizuno, an owner of Fukuyama Castle, then was donated to Tomonotsu Gion sha (the current Nunakuma Shrine) in the 1650s.

Initially it was quite compact and was easy to assemble, disassemble and move wherever you want. Now, however, it is permanently fixed and installed with the wooden shingle roofing, a dressing room, a room filled with mirrors, and a bridge hanging. In 1953, it was designated as an Important Cultural Property of Japan, and today, it is still used as a Noh stage.

There are various festivals held throughout the year at Nunakuma Shrine.
The “Shinto Bow Ritual” offers prayers for the peace and safety of the year in February, “Chinowa-kuguri (passing through a hoop made of kaya grass)” purifies impurities in June, “Otebi Shinto Ritual” involves climbing up stone stairs while carrying a huge fire torch in July, and the “Oo Matsuri (Autumn Festival)” is said to be the biggest festival in Tomonoura at Watasu Shrine. Many people come visit to see the festival from both inside and outside Tomonoura, and the town is bustling with activity.

Shrine ritual of the Bow 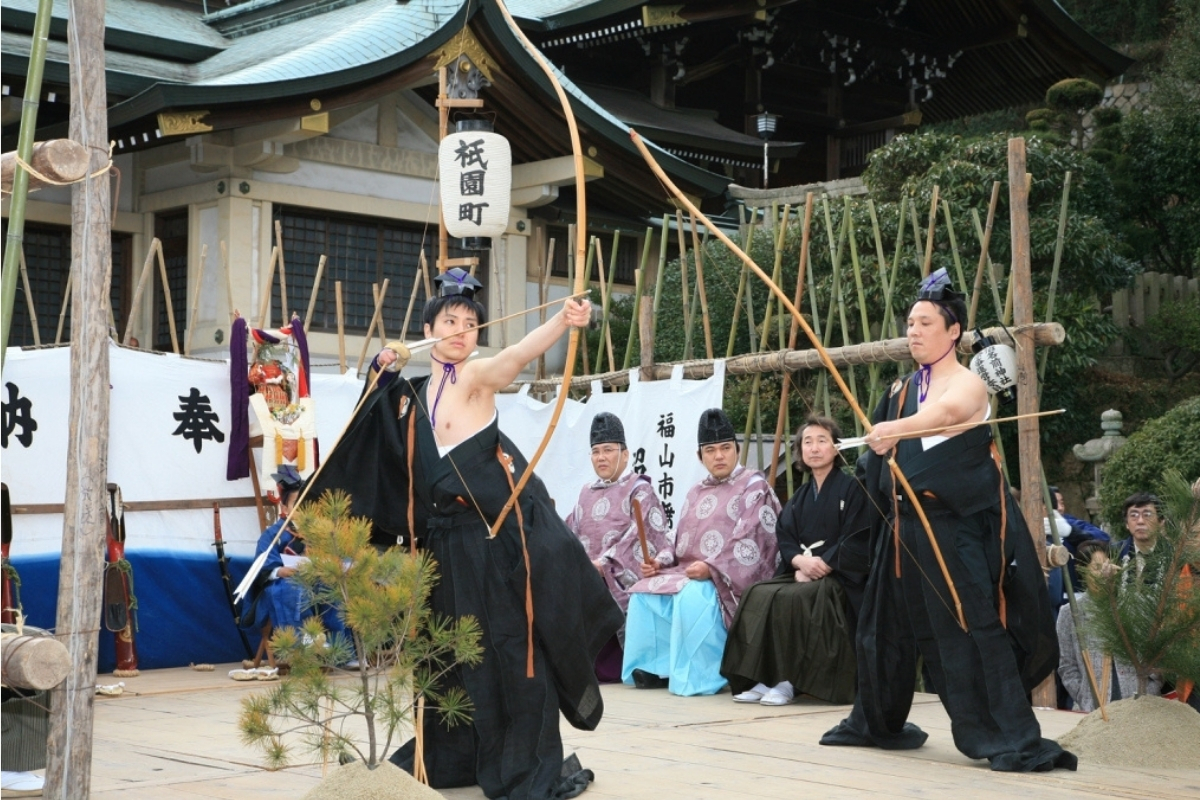 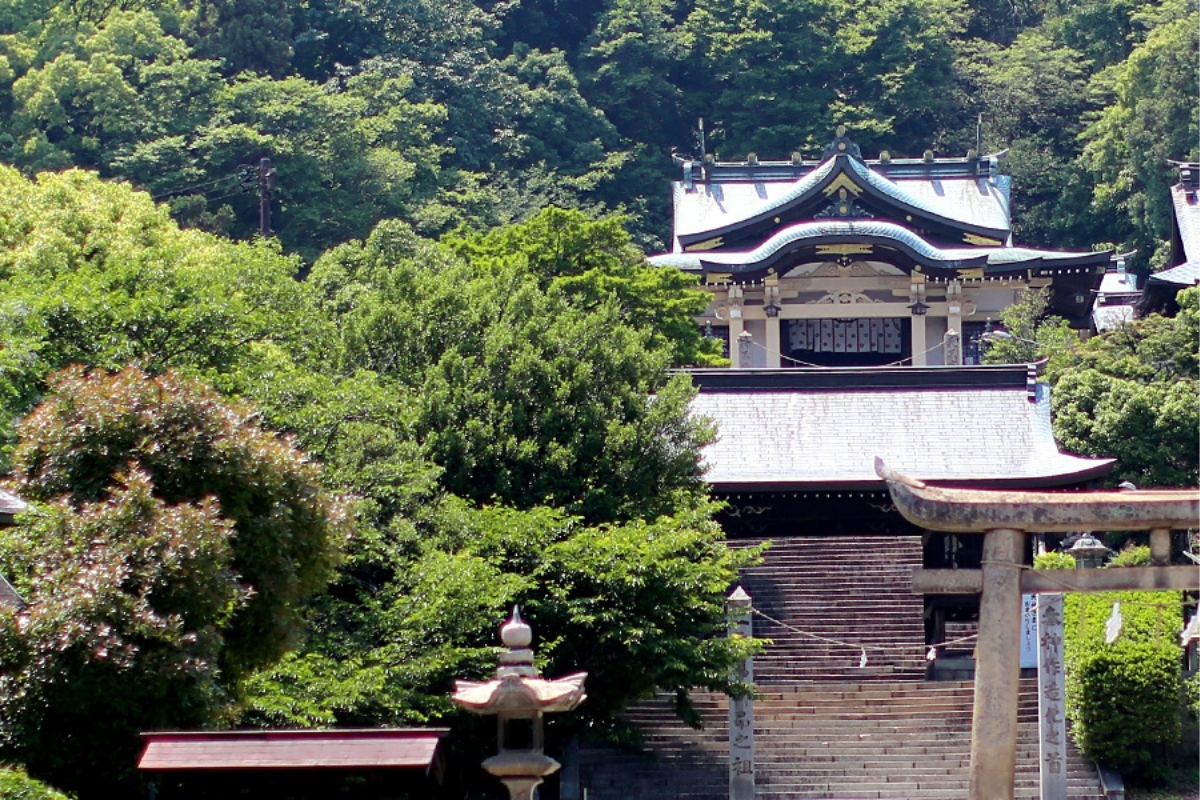 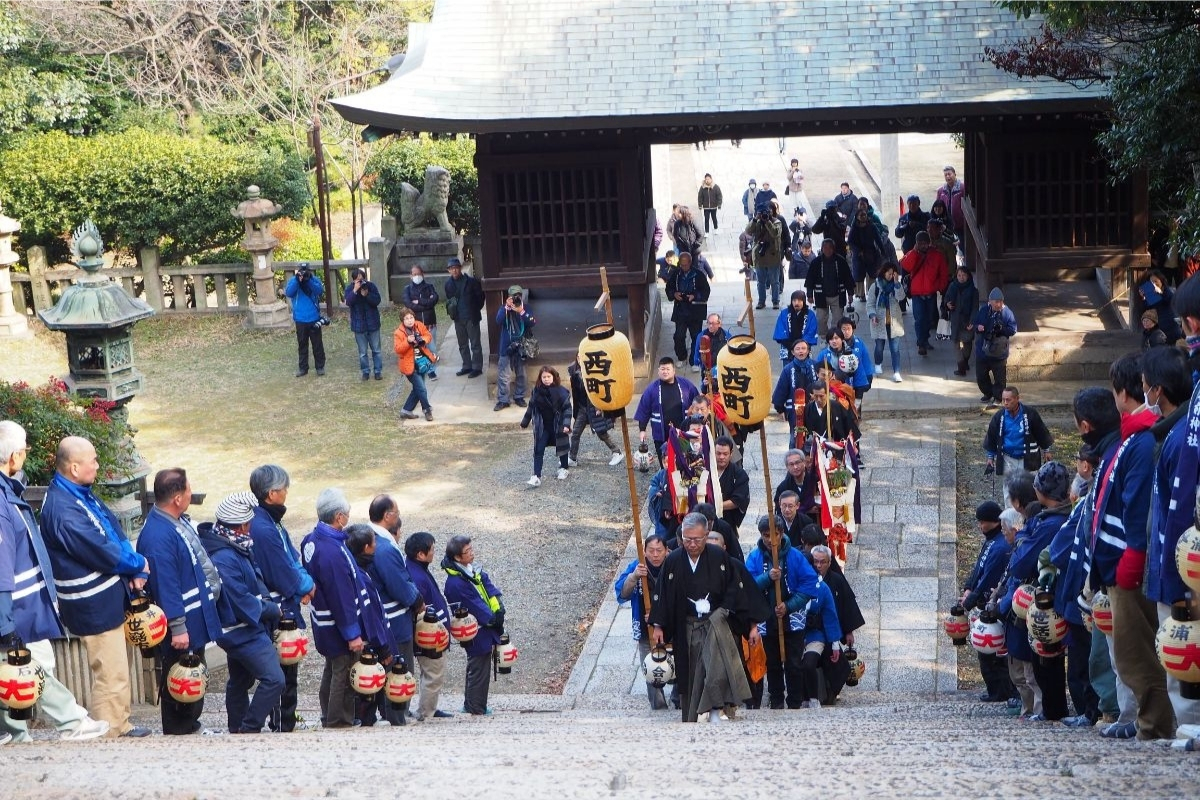