One only needs to read the descriptions in the Waka poem from the ancient Manyo times, view the numerous paintings and hear the old saying created by Korean envoys to realize that Tomonoura has one of the most beautiful and unique natural landscapes in all of Japan.

The calm, changing colors of the Seto Inland Sea dotted with large and small islands as well as boats, and Tomonoura’s quaint old town in harmony with shrines and temples produce a diverse scene unique to this area.
As the Korean envoys described, it is “The most beautiful scenic spot you could find from Tsushima to Edo.” Tomonoura is simply heartwarming. 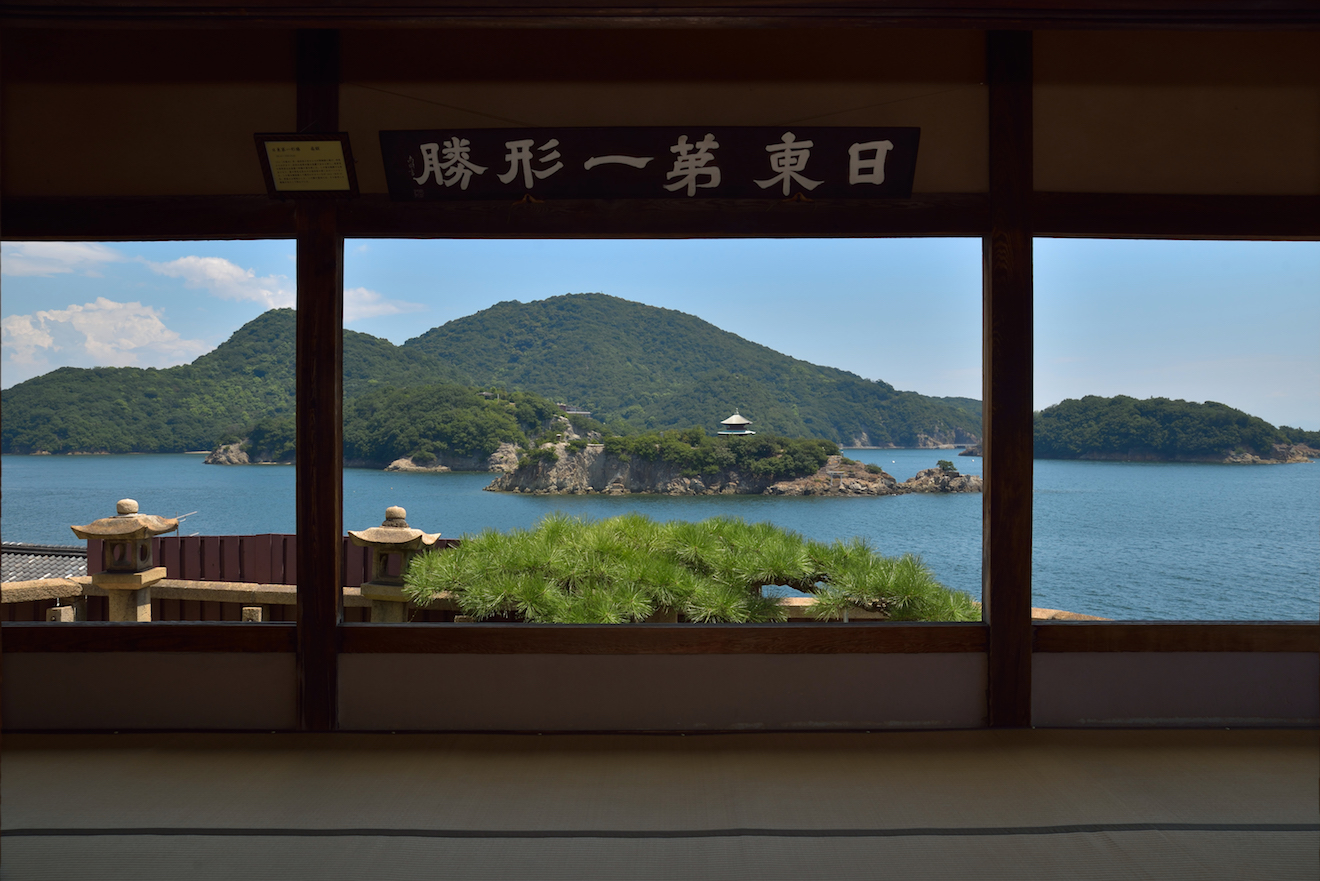 In 1711, when Korean envoy Yi Bang-won stopped by Tomonoura and visited “Fukuzen-ji Temple,” he praised the view from the guest house as “Nitto Daiichi Keisho.” In 1748, the Korean senior envoy Hong Ka-hee named the seat which observes the Setouchi as “Taichoro,” allowing his son to leave a book. From Taichoro, we can witness Bentenjima Island where the vermilion Bentendo is built, and Sensujima Island which lies behind it.
Jippensha Ikku made a poem to describe this scenery in his tale “Itsukushima Sankei Hizakurige,” which likens the mild Seto Inland Sea to fresh blue tatami mats spreading into the distance. 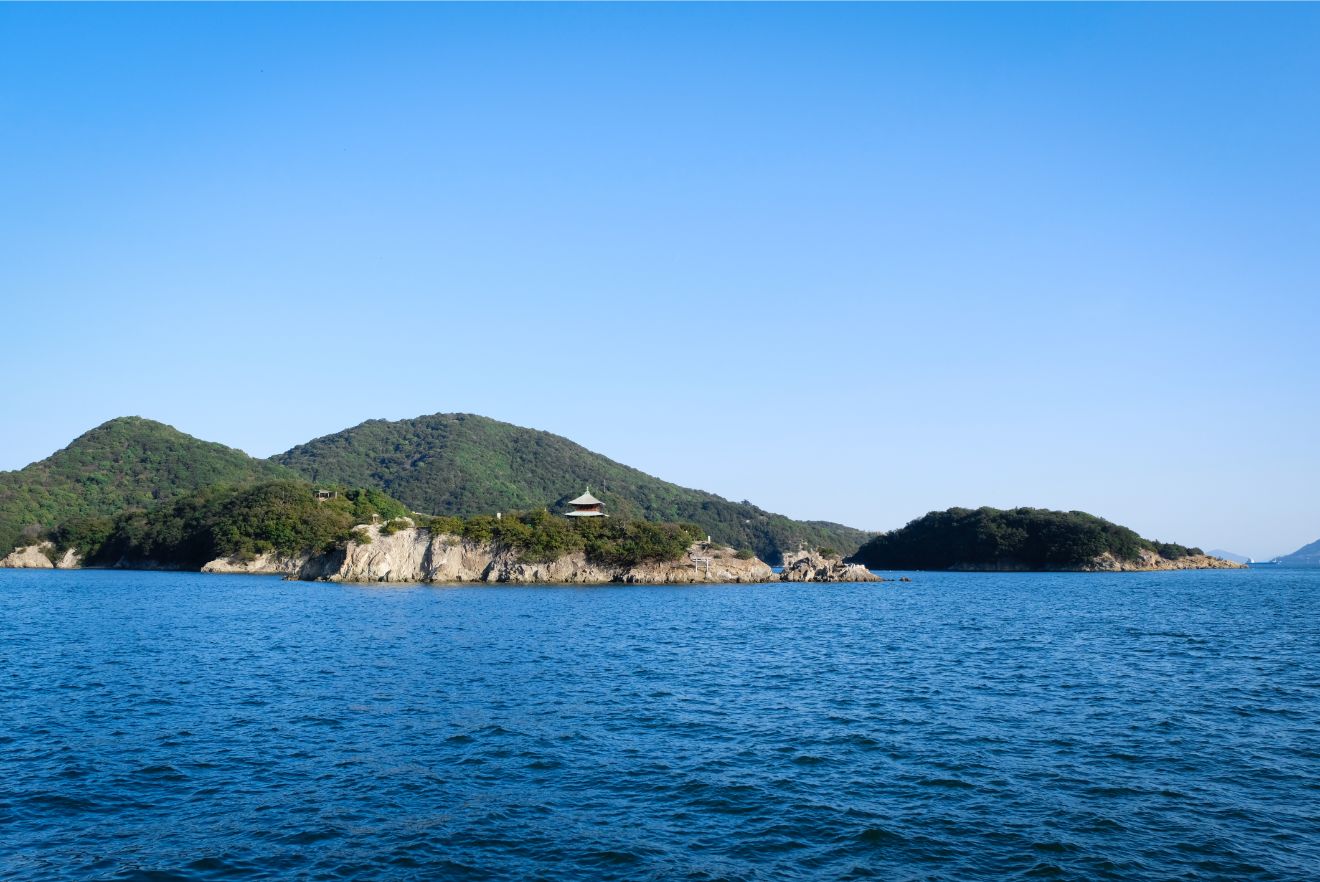 Bentenjima Island, officially named as Hyakkanjima, got its nickname from the vermilion Bentendo building. Benzaiten is enshrined at Benzaido, and is considered the fishermen’s guardian angel. “Bentenjima Toba, ” refers to nine lithographic limestones (originally with eleven layers) that were founded in 1271, which are now designated as an important cultural property of Hiroshima Prefecture.
The vermilion hall which houses these limestones is located on this tiny and precipitous uninhabited island. The historical atmosphere is not only elegant, but also has a very calming effect which heals the body and soul. We can simply relax and think about the eternal history and graceful scenes as if we were in a picture. 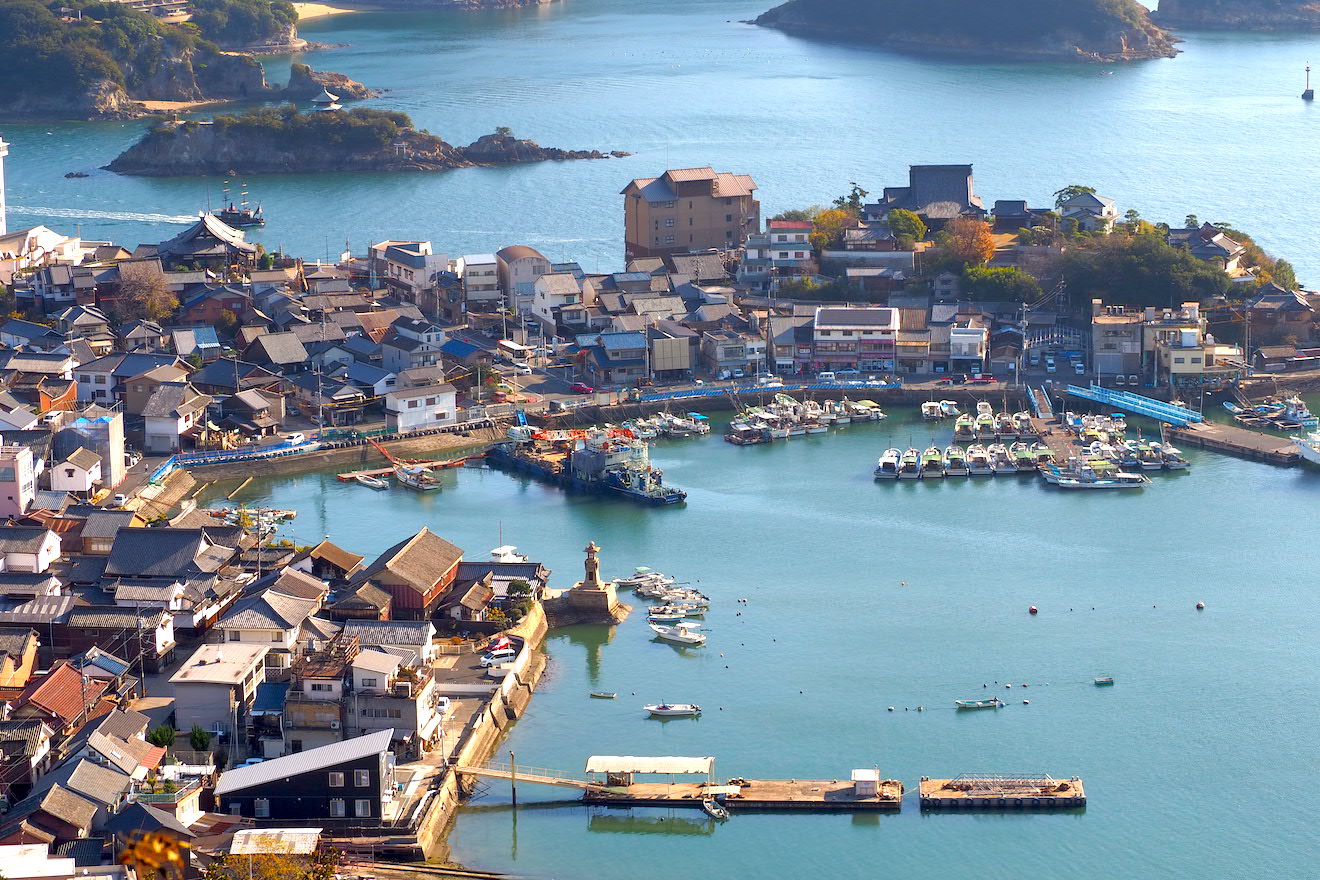 The kanji character of “Tomo” in Tomonoura refers to an archer’s left-wrist protector worn when shooting an arrow, and is named as such after the curvy shape of the island, which mimics the omo.
If you wish to experience this shape from a height, head to Iou-ji Temple located on the hillside of Mt. Ushiroyama, on the western side of town. Take a little walk to Iou-ji Temple, then continue up the stairs towards the mountain for a further 15 minutes for a full view.

Your efforts will be rewarded with a breathtaking view on the mountaintop at Taishiden. You can also get a bird’s eye view of the townscape of Tomo town, an overview of Bentenjima Island and Sensuijima Island, as well as the Shikoku mountain range.
Not to mention, it is the best place to watch the sunrise among locals. We can enjoy a range of gorgeous views during the whole day, including the clear blue sky and shimmering turquoise sea of the daytime, and the elegance of the beaming moon as dusk turns to night. Clearly, making the effort to climb up all those stairs is worth the unforgettable reward. 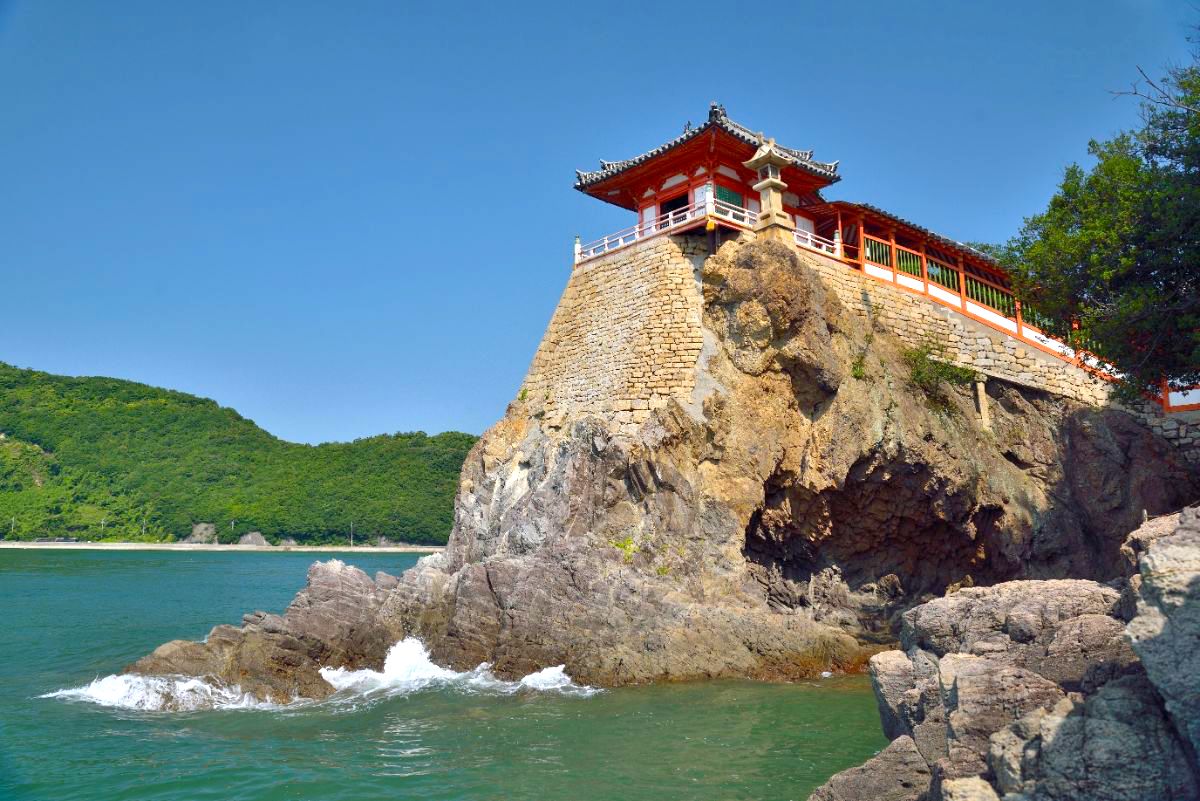 Located just 4km west of Tomonoura is a lacquer-coated temple on the edge of Abuto cape.
This is the Buddhist temple of the Rinzai sect, built upon great stone walls as if it were being poked forward into the blue sea.
People agree that it was founded around 1570 and since then, Kannon-do has been designated as Japan’s important cultural property.
If you walk down the corridor from there, you should reach Bandai-ji Kannon-do, which overlooks a spectacularly prominent ‘splash-zone’, where the waves crash violently against the calm and milky Seto Inland Sea. This contrasts makes for a very special and breathtaking scene.
The stone walls and guardrails are relatively low, allowing you to get a great view of the vast sea spreading out in front of your toes. Get a taste for the sea and enjoy this thrilling adventure.