Although the exact origin of Tomonoura is unknown, the oldest anthology of Japanese tanka poems, “Manyoshu”, thought to be written between 600 and 750 AD, contained eight poems about Tomonoura, indicating it was already established as an important port city.

At the time, ships came and went on the tides of the Seto Inland Sea, which diverged at the port of Tomonoura. The town prospered as a “port of waiting for the tide”, where warriors, writers and artists passing through contributed to its diverse culture. Tomonoura was involved in many incidents and wars throughout Japanese history, the knowledge of which will only make you visit all the more meaningful.

Tomonoura is located on the southeastern tip of the Numakuma Peninsula, which extends into the Seto Inland Sea. The tides from the Kii Channel in the east and the Bungo Channel in the west meet here, just offshore of Tomonoura. Boats used the interaction of the tides in their travels and often had to wait in the port for the right timing to catch the tide that would take them in the direction they wanted to travel.

Nearby islands also acted as breakwater, making Tomonoura a safe port in rough weather. Each of these characteristics made Tomonoura an ideal port of commerce and culture in historic Japan. 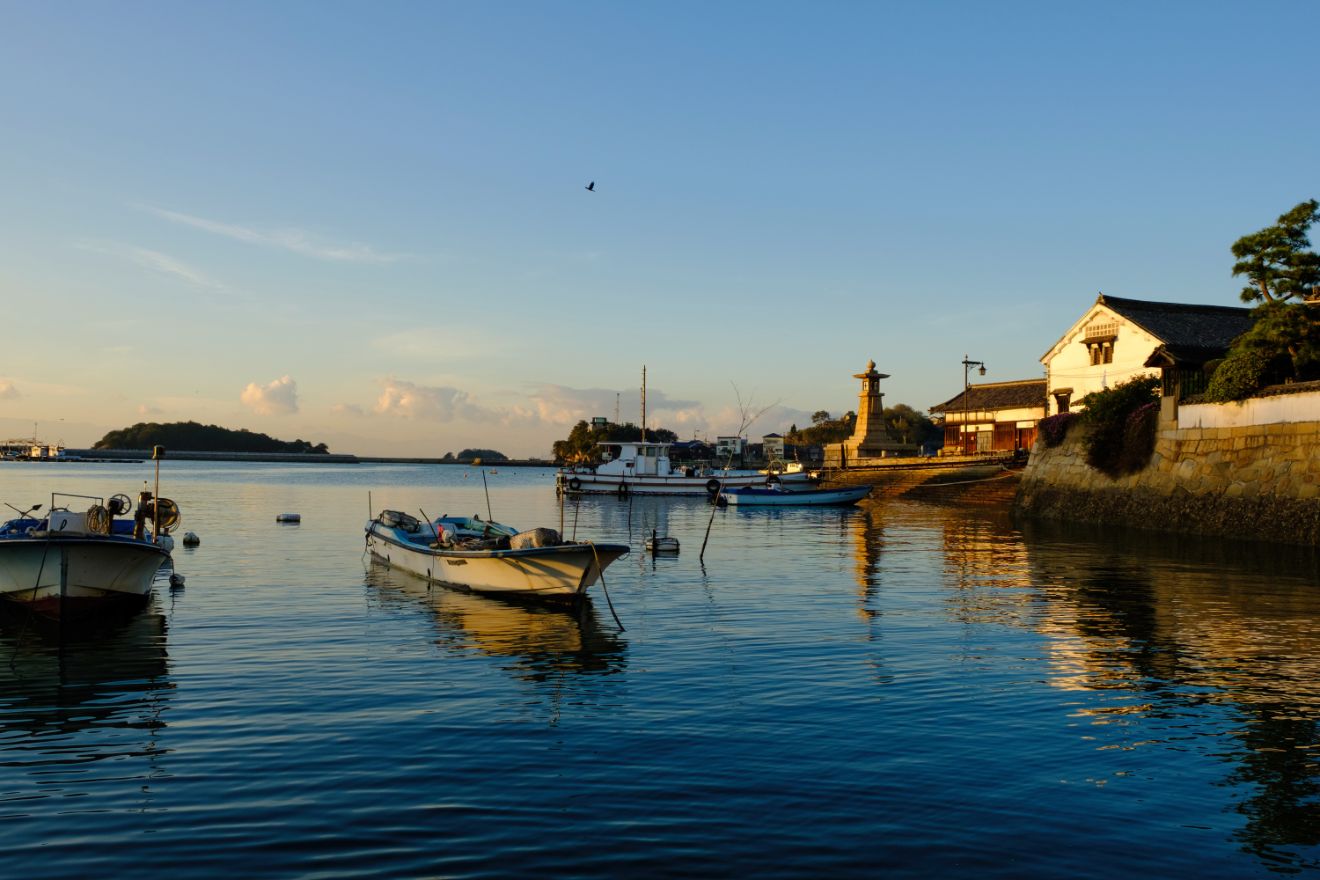 As a key maritime port in western Japan, Tomonoura played an important role in early Japanese politics.
The Muromachi Shogunate, a 200-year dynasty pre-dating the Edo Period, is believed to have started as a result of a decree from the Emperor received by Takauji Ashikaga at Tomonoura. Just before the fall of the Muromachi Shogunate, the last Muromachi shogun, Yosiaki Ashikaga fled to Tomonoura for protection from his enemy, Nobunaga Oda. The saying goes that “Ashikaga rises and falls at Tomonoura”, in reference to the first and last Ashikaga shoguns who were connected with the town. Relics of the Ashikaga family can be found at the Fukuyama City Tomonoura Museum of History and Folklore.

During the Edo Period, Masanori Fukushima, the lord of the Aki and Bingo regions, established a castle and maintained Tomonoura as a castle town, though the castle was abandoned in obedience to the laws of the Tokugawa Shogunate during the Edo Period.
After that, Tomonoura became known as a port town and named after “Tomonotsu”. It was also around this time that Tomonoura’s famous Houmei-shu was born. Ships from northern and southern Japan made calls to Tomonoura’s port, as well as envoys from Korea and the Ryukyu Islands (which includes Okinawa), and the head of the Dutch Trading Company. One can imagine the wonderful mixture of cultures that mingled together in this lively town.

In 1867, the infamous “Iroha Maru Incident” occurred in the waters off Tomonoura, where the Kaien vessel Iroha Maru was struck and sunk by a ship belonging to the Tokugawa Shogunate. Ryoma Sakamoto, a hero of Japan known for fighting for modern democracy, was aboard the Iroha Maru and negotiated reparations for his sunken vessel in the first sea trial under Japan’s universal public law. 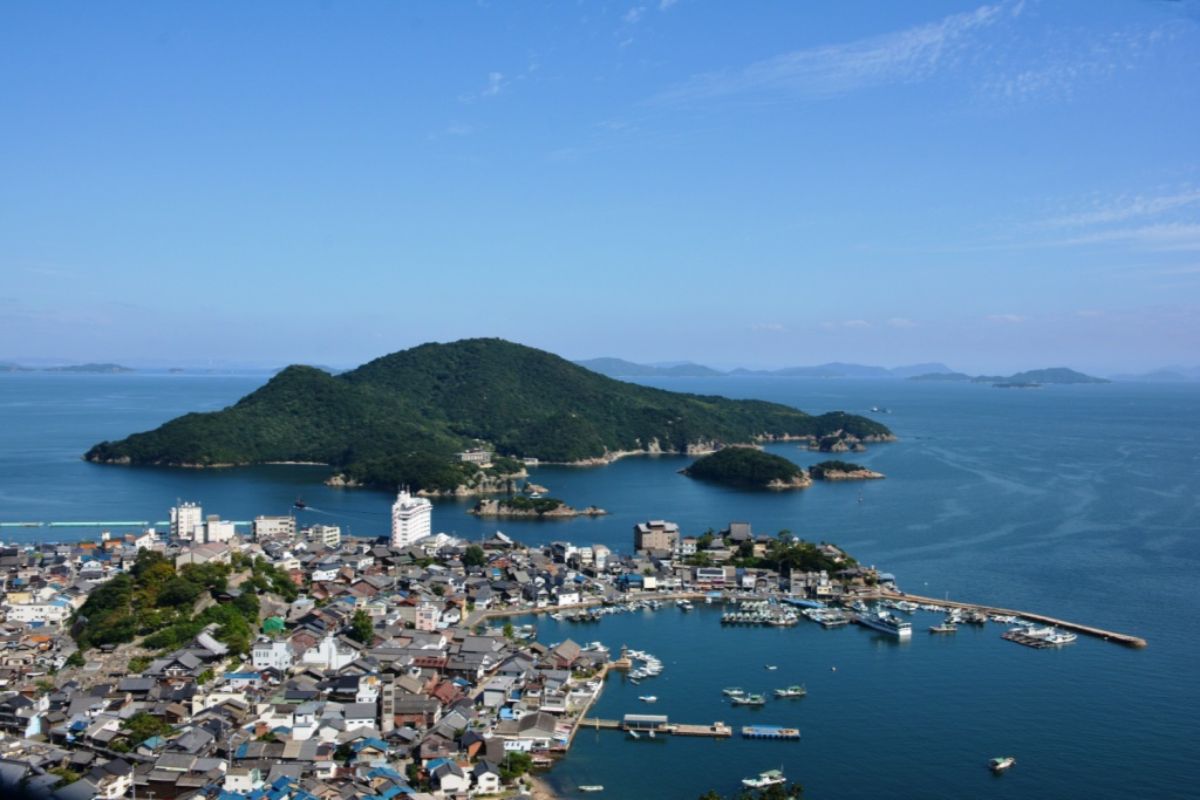 Historic townscape well remained despite of the wave of modernization

After the Meiji Restoration of 1868, the era of industrialization came quickly upon Japan and Tomonoura grew from a commercial port to a town of traditional industries such as Houmei-shu brewing.
In 1925, Tomonoura Park was designated as a National Scenic spot, followed by the Seto Inland Sea in 1934. At that point, Tomonoura’s reputation as a town of historic significance was set and several of its districts were further designated as Japanese Preservation Districts for Groups of Historical Buildings.

Thanks to these designations, much of the townscape remains as it has been for centuries, making it a prime location for various historic films, novels and TV dramas. Most notably, Miyazaki Hayao’s (Studio Ghibli) anime “Ponyo on the Cliff” was set in Tomonoura.